Prime Ministers personal appearance on the frontline has unequivocally reinforced that entire of Ladakh is Indian Territory and any intrusion and aggression will be met with full might and resolve of the nation. With this the PM has clearly defined the National Strategy.

"The enemies have seen your fire and fury" - Prime Minister Narendra Modi addressing soldiers at Nimu in Ladakh. The Leh based 14 Corps is also known as the Fire and Fury Corps.

With the unscheduled and surprise landing of Prime Minister Narendra Modi at Kushol Bakula Rimpochee Airport at Leh on July 3, 2020, along with the first Chief of Defence Staff and the Chief of Army Staff, India has seized the initiative and taken the Challenge to Xis camp and have sent a clear message that India shall resist every expansionist move with courage and resolve. The visit is even more significant as it has happened amidst critical stand off at the Line of Actual Control where a brutal clash resulted in martyrdom of 20 braves of Indian Army. With this visit and in his 26 minute speech at Nimu to the troops, while paying glowing tributes to the bravery of the martyrs and the Armed Forces, PM has sent out a very clear message to the Nation, the adversaries and the rest of the world that India is prepared and will stand up to defend its territorial integrity under all circumstances.

The visit has been a great moral booster for the troops on the front line in Ladakh and whole of the armed forces and their families, especially at a time when arm chair analysts and dooms-sayers within our camp noise about the asymmetry of power and seek India to re-caliberate its strategy. PMs personal appearance on the frontline, recalling the sacrifice of people of Ladakh with special mention of Rimpochee and acknowledging Ladakh as Indias pride, has unequivocally reinforced that entire of Ladakh is Indian Territory and any intrusion and aggression will be met with full might and resolve of the nation. With special focus on the strategy of some countries without mentioning China on Vistarvad (Expansionism), he stated that those who are driven by expansionism have always posed danger to the world. History bears testimony that such forces have either been destroyed or forced to return back. It is due to this experience that world is coming together against expansionism. With this the PM has clearly stated Indias future approach to its Foreign Policy and National Security. By mentioning that India has always pursued the path of peaceful coexistence, however the same can only happen from a position of strength, our resolve to repulse any incursion, irrespective of its potential cost has been conveyed unambiguously. 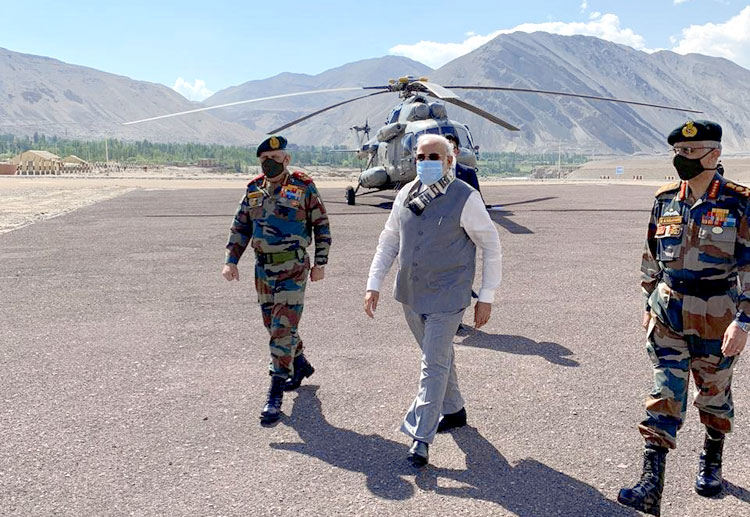 At the highest battlefield of the world, the PM in his speech, straight from the heart, punctuated with quotes in Sanskrit, Veer Bhogya Vasundhara (Only the brave shall inherit the earth), Tamil and Hindi, has glorified the sacrifices. His mention on his governments special focus on Border Area Development Programme (BADP), push to the infrastructure development under the same programme, which remained neglected for decades, equipping the armed forces with latest state of the art technology, weapons and equipment, as also a word on integration and the office of the CDS was for reassuring the troops that there is every endeavour to be better equipped than China. The mention of unparalleled and universally acknowledged bravery of Indian soldiers during the World War I & II, in the Peace Keeping Operations across the globe and various wars fought post independence was to invoke the pursuance of internal strength. This surely has touched the heart and spine of every Indian soldier. Taking the time out to meet the injured of Galwan Valley clash at 153 Base Hospital at Leh on his way out was the finest gesture from the leader of the nation. His prudence in using the occasion to draw a comparison between Indias pursuit of Vikasvad (the path of Development) vis Vistarvad (Expansionism) is symbolic of his statesmanship and admirable.

A special mention of Lieutenant General Y.K. Joshi, the GOC-in-C of Northern Command who briefed the Prime Minister on this occasion. The nation couldnt have had a more experienced and dedicated Military commander in such critical times. He was commanding the unit when they captured the Tiger Hill in Kargil war. Commanded his Unit, Brigade, Division and the Fire & Fury Corps in Ladakh in same area and was also Defence Attache to China for three years. Who would know Chinese better and hence the confidence of troops in him.

Prime Minister Modi getting briefed on the situation during his visit to Ladakh.

The visit of PM Narendra Modi to Leh and Nimu, to get briefed in person, away from the power point presentations, meet the injured who were involved in the brutal clash, and interact with troops on the ground that are preparing in case the situation transits from diplomatic negotiations to military zone, has been a game changer. On one hand as head of the nation and true leader he has given a big boost to the confidence of the nation and shut up the doom-sayers. He has also in no uncertain terms messaged that banning of the Apps was just the beginning and more is yet to come and no matter what is the potential cost, the country is prepared for the same. On the other, he has given a very clear message to the world and especially China, that India lead by Modi shall stand up with resolve backed up by its full might against any incursion or aggression of any kind/any form.

He has given a very clear message to the world and especially China, that India shall stand up with resolve backed by its full might against any incursion or aggression of any kind/any form

China, which to date relied on Sun Tzus Art of War and followed the tactics of deception, deceit and delay and then stab from the back has no option but to respond. The Global support for India has grown exponentially. It is not a coincidence that when PM was delivering his speech at Nimu to his troops, Shinzo Abe, Prime Minister of Japan at the same time was announcing to the world that Japan opposes any unilateral attempt to change the status quo on the LAC. Earlier, USA, France, Australia and UK had already come out against China and its policies of economic and territorial aggression. Russia, which was perceived to be under the influence of China, has already promised to advance its delivery of S-400 by one year. With such antagonism and disapproval from the world on its hegemonistic stance, now it is for China to Read the Tea Leaves right. Statements such as avoid any miscalculation on China or time not right to add to tensions will not cut ice with India any more. India is talking from a position of strength.

Modi has given a very clear message that India will not back off. And China must restore the status quo on the LAC at the earliest. However if it decides to take it to a long haul, India is well prepared for the same in every domain.

Lt General Jagdeep Kumar Sharma, AVSM, Chief of Staff (COS), Central Command retired from service on April 30, 2019 after an illustrious career in the Army.

He is a scholar warrior and senior strategic military leader with close to 42 years of coloured service. An expert on Siachen and Ladakh with experience in counter insurgency operations in J&K and North East and Peace Keeping Missions in West Africa is also an expert on Information Warfare. As part of Directorate of Military operations for over five years at different levels have seen through Kargil War, Operation Prakaram, Uri and many crisis situations of internal conflict and out of country operations including hostage crisis of Sierra Leone and Lebanon.

Intensely committed to academic pursuance with Doctoral Thesis on Civil Military Relations and many articles on military and strategic leadership. As part of National Defence College, India for three years have trained and engaged with senior and strategic leadership of India and countries across the globe. He has been writing for various magazines and speaking in various forums and institutes on strategy and leadership.