2019 set to be a landmark year for military inductions

From a game-changing missile-firing drone to an Inter-Continental Ballistic Missile (ICBM), key new weapons this year will give India more military muscle, and generate fresh options for the politico-military leadership to address threats. SP's Land Forces takes a sneak peek.

Widely regarded as a game-changer, this will be India's first missile-armed drone. It will give India stand-off cross-border strike capability against adversaries, home in on targets like terrorist camps and bombard these remotely, minimising physical risk otherwise undertaken by soldiers. The Heron TP weaponised drones can detect, track and destroy targets, including mobiles ones, with air-to-ground missiles. These drones will give a new dimension to India's counter-terrorism capability.

India is believed to have ordered 10 of these hell-wreaking drones for an estimated $400 million. This acquisition will significantly scale up not just India's UAV collaboration with Israel but also significantly push up the stakes in the New Delhi-Tel Aviv strategic partnership. Reported to be in-the-works since 2015, the deal is said to have been finally clinched in 2018.

This will make the arsenal of India's Strategic Forces Command so much more potent with an Inter-Continental reach for its weapons. The three-stage Agni-5 is reported to have a range above 5,000 km. It incorporates key improvements in propulsion, navigation, guidance and re-entry technologies achieved during the course of India's Integrated Guided Missile Programme which started in 1983. The Agni-5 is reported to carry a 1.5 ton nuclear warhead.

The M777 Ultra Light Howitzers and the K9 Vajra tracked artillery guns will be operationalised in their first respective regiments in the Indian Army.

These are the first new artillery guns to be inducted into the Indian Army after the Bofors acquisition in 1986. This provides the much needed firepower renewal for the Indian Army.

There's a Make in India element to both these inductions. One hundred and forty five M777 guns are being acquired under an FMS deal with the US. Twenty-five of these guns are being directly imported. The remaining 120 will be assembled at an Assembly, Integration and Testing Facility in Faridabad. The manufacturer, BAE has chosen Mahindra for the assembly in India.

One hundred K9 Vajra guns are being assembled by L&T in India in collaboration with the South Korean Hanwha.

The Indian Army's foot soldier finally has something to cheer about. He will finally get a contemporary assault rifle and carbine this year. The Indian Army will start getting the first lot of 77,000 SiG Sauer SiG 716 assault rifles and 93,895 Caracal carbines, which are being imported under fast tracked programmes.

Army Chief General Bipin Rawat has said the principal focus of the modernisation drive is to improve the lethality and survivability of the Indian foot soldier. The SiG-716, which fires 7.62 mm ammunition, will replace the indigenous INSAS rifle which the Army has been unhappy with for a long time. The Caracal will replace the vintage Sterling 9 mm carbine. 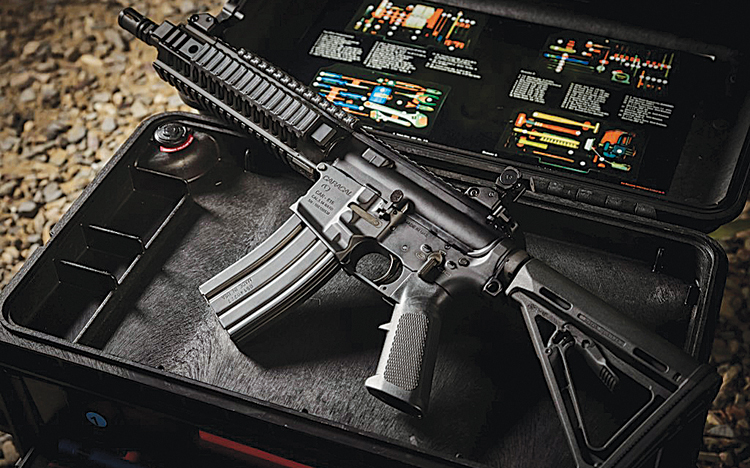 These initial inductions will be followed up by Make in India programmes for 650,000 assault rifles and 350,000 carbines. Kalashnikov is reported to be in the reckoning for making the AK-103 in partnership with the Ordnance Factory Board. For the carbine tender, several leading small arms manufacturers including Caracal, Colt, IWI, S&T Motiv and Beretta are likely to compete.

There's yet another programme for acquiring 16,800 Light Machine Guns.

The Indian Army also gets the Italian Beretta Lapua Magnum and American Barrett M95 guns to replace the ageing Soviet-origin Dragonov rifles. Both guns have been used effectively in Iraq and Afghanistan. The initial lot of over 700 guns will be supplied to meet the very pressing requirements of the Indian Army's Northern Command on the Line of Control, where Indian troops are repeatedly being targeted by Pakistani snipers. The larger requirement of over 5,000 guns will be met subsequently through a capital acquisitions programme.

The .338 calibre Beretta Lapua Magnum Scorpio TGT can be used for kills at a distance of up to 1,500 metres. It accounts for some record breaking sniper shots. The Barrett M95 is also used as an anti-materiels rifle (AMR), in the role of a bunker buster to target enemies holed up behind fortified defences. This .50 calibre weapon has a kill range of 1,800 metres, and will supplement the Indian Army's Denel AMR's acquired from South Africa post the Kargil War in 1999.

With Hindustan Aeronautics Limited (HAL) declaring the indigenous Light Combat Helicopter (LCH) ready for induction, the decks have been cleared for an early deal for 15 of these gunships. It is expected that two separate contracts to supply 10 LCH to the IAF and five to the Army could be signed at the forthcoming edition of India's biggest biennial airshow, Aero India at Bengaluru in February. The contracts are expected to be worth 3,000 crore.

HAL recently disclosed a successful test-firing of the Mistral 2 air-to-air missile from the LCH, and declared all weapons trials concluded.

The Indian Army, which is seeking control of the attack helicopter role from the IAF, also expects to sign a contract for the Apaches this year. Its Chief, General Bipin Rawat, recently hailed the Apache as "a tank in the air". The Army is looking at an initial induction of 6 Apaches into the Army Aviation Corps.