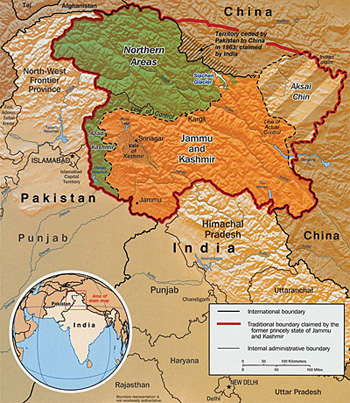 Indian military planners feel that the collusion between China and Pakistan which is so clearly evident in peacetime is likely to translate itself into active, mutually supporting, military operations, during conflict situations. In Indian context it would imply fighting simultaneous conflicts in two widely separated theatres of operations namely the Western theatre (against Pakistan) and the Northern/Northeastern (against China) in the future.

The Chief of Amry Staff, General V.K. Singh, while delivering the inaugural address during a seminar on “Emerging Roles and Tasks of the Indian Army”, organised by the Centre for Land Warfare Studies (CLAWS) on October 15, 2010, referred to Pakistan and China as ‘two irritants’. In the same vein, but more explicitly, in end-December 2009, the former Army Chief, General (Retd) Deepak Kapoor had also stated during a seminar of the Army Training Command that the Indian Army must prepare for a two-front war. The statement of the current Army Chief coming close on the heels of the former Army Chief ’s declaration indicates that our armed forces are indeed planning and preparing for a contingency in which they may have to confront both neighbours simultaneously.

The five thrust areas of the new war doctrine as reported in the media at that time are as follows:

• Two-front capability: This is the anchor on which India’s new war doctrine is based which means that India should be prepared to effectively meet simultaneous threats from China on the northern borders and Pakistan on the western borders.

• Asymmetric warfare and sub-conventional threats: Both the adversaries can be expected to use asymmetric means in the form of infiltrators and terrorists across porous borders to divide our attention and thus hope to militarily weaken our overall response. Our focus on fastpaced operations could be slowed down considerably by such threats to our lines of communications and the civil infrastructure. We therefore need to have an independent operational capability to confront such threats without diluting the main military effort. This capability is being referred to as half front capability.

• Strategic reach and out-of-area operations capabilities: The new war doctrine also seeks to confront future challenges by acquiring an out-of-area capability so as to militarily meet the role and aspirations of a regional power.

• Tri-service operational synergy: The key aspects of strategic planning and conduct of future wars will be based on interdependence and operational synergy among the three services. Therefore, joint operations, space-based capability, ballistic missile defence and airborne, amphibious and air-land operations must be addressed comprehensively.

• Military technological dominance over adversaries: This will be covered by acquiring capabilities for networkcentric warfare, information warfare, cyber warfare, all integrated to facilitate speedy decision-making and exploitation of fleeting tactical opportunities.

From a strategic viewpoint, it seems that India has shifted to a doctrine of ‘active and aggressive defence’ as opposed to passive defence in the past. However, it would be wrong to assume that these capabilities show India’s growing proclivity towards military adventurism. India’s record on the contrary shows a matured and measured attitude towards engaging in wars. The doctrine’s enunciation of a ‘two-front war’ and enhancement of ‘strategic reach and out-ofarea operations capabilities’ carry immense political and strategic significance in terms of India’s future strategic directions.

Speaking to the media on Army Day, January 15, 2011, General Singh for the first time publicly revealed that the Army would ‘reorganise, restructure and relocate’ various formations to help transform into a more agile and lethal force. “We are looking at reorganising and restructuring our force headquarters…for faster decision-making, so that it becomes slightly flattened and more responsive,” he said. Essentially, the changes are aimed at strengthening the Army’s capacity for fighting what a serving General had once described as a war on ‘two-and-a-half-fronts’—a reference to possible simultaneous confrontations with Pakistan and China at the same time as managing an internal counter-insurgency effort.

Analysts often discuss the reasoning for such a doctrine. Are we anticipating a fullfledged war among the three nuclear armed neighbours? Nothing can be farther from truth. Then what is the necessity of having a doctrine of this nature. A more pragmatic and logical explanation seems to be that by placing a ‘two-and-a-half-front war strategy’ as a top priority of the new war doctrine, it will henceforth provide an unambiguous political and military focus on strategic and operational initiatives to ensure readiness. At strategic levels, it would cater to strategic responses in acquiring comprehensive national power in relation to the threats, while at operational levels it would indicate the focus for capability building. Its inclusion would help in blending political, economic, diplomatic, technological and military measures to achieve the dynamism and synergy at national level that is currently lacking.

Let us also try to further understand this reasoning by focusing on our two neighbours, Pakistan and China, and then examine the nuts and bolts of the capability required.