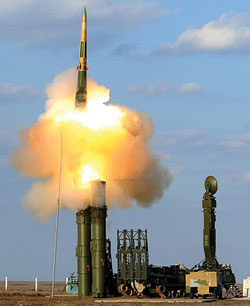 The mobile long-range air defense missile system (ADMS) Antey-2500 is a very effective air defence (AD) which could become the mainstay of AD of any nation. When the characteristics are compared to other systems in the world, Antey-2500 is undoubtedly a world leader. The current export version of Antey-2500 has been upgraded extensively from the 1990s version to meet the present and future air threat. It includes modern element base and digital technologies that significantly enhance the performances of the system. The most significant innovation in the new missile is to increase its firing range up to 350 km with which it can effectively engage and destroy airborne warning and control system (AWACS ) aircraft. Earlier such hostile targets were engaged by fighter aircraft. Antey-2500 has a combination of pre-programmed guidance of surface-to-air missile (SAM) with the radio correction and semi-active guidance at the final stage of flight, which provide it a high anti-jamming and accurate firing capability. The effective destruction of the target is provided with the use of heavy warhead weighing 150 kg. Its destructive effect multiplies because of the Russian “know-how” – which is guided blasting of the warhead charge providing fragments spread within the spatial angle of 60°. When firing missiles which have active radar seekers on the group of targets, they may target the most powerful emitting target, which is almost impossible for “Antey-2500” SAM. It is capable of destroying all types of aerodynamic targets, including cruise missiles, as well as the ballistic missiles launched at the ranges of more than 2,500 km. Antey-2500 can easily be integrated into the customers overall AD system but it can effectively operate in autonomous mode, using its own highly effective detection radars.

One of the major advantages of ADMS Antey-2500 is the capability to use its sensors to considerably increase the effectiveness of other air defence means including medium-/long-range and anti-ballistic missile defence (ABMD) systems. Combat batteries or even separate launchers with missiles of “Antey-2500” ADMS might be easily integrated into these systems. Each launcher by itself computes the optimal launch moment for its missiles and its builtin radar provides for missiles guidance to the target (radio correction of flight programme and target designation for several seconds before its destruction). For this purpose, it is necessary to provide constant transmission of the target coordinates to the launcher from the radar of AD System with which “Antey-2500” launcher has been integrated with. Such integration of “Antey-2500” ADMS elements into perspective non-strategic missile air defence systems will provide effective protection against a wide spectrum of ballistic missiles at a stage of atmospheric interception as well as the protection of objectives and ABMD means themselves against all types of air assault means. 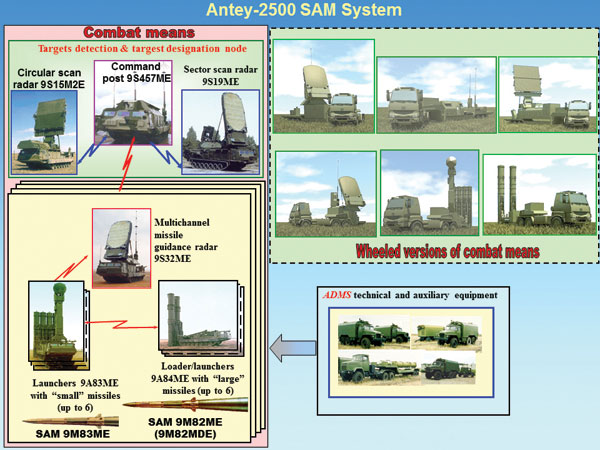 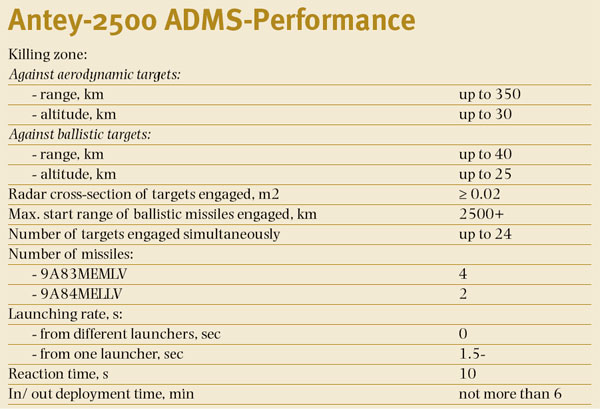 “Antey-2500” ADMS is characterised by very high combat survivability: the deployment/close down time does not exceed 5-6 minutes and the tracked chassis allow to change positions even in cross country and adverse conditions. On the customer’s demand, the ADMS may be supplied on the wheeled chassis.

The command and control over ADMS (ADMC/battalion) is executed from command and control post (CCP). It receives the information from two subordinate radars and/or external sources (higher level CCP, external radars). One of radars executes circular search of space at a distance of 500 km. The second radar (having electronic controlled beam in two planes) operates in the prescribed sector. Its main missions are: the timely detection of ballistic missiles warheads as well as targets detection in conditions of heavy jamming. The automated analyses of the airspace situation is executed at the CCP, after that it distributes the chosen targets among subordinate missile batteries (ADMBat), there are up to four batteries under one CCP.

The multi-channel missile guidance radar (MGR) is the main element of the battery; the radar may detect enemy’s targets independently in the prescribed sector, or operate depending on the target designation from CCP. Each MGR tracks up to 12 targets and controls up to six launchers by transmitting the coordinates of one target to each launcher. Depending on the data received from MGR, the launcher provides for the firing on the determined target, guiding radio correction and designation radar antenna on the target. The firing is executed with the use of one or several SAMs, launched from the launcher or loader/launcher attached to it. Every battery may contain up to six launchers and loader/launchers.

“Antey-2500” ADMS is available in serial production for the Russian Armed Forces and for export as well. The system continuously undergoes development and has vast upgradation potential. (See figures for the composition of the system)