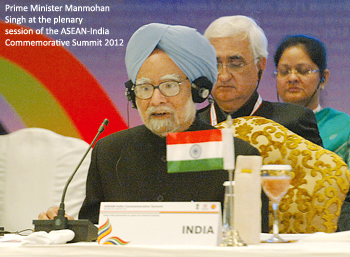 The dominant impulse of India’s Look East Policy that was launched in 1992 was economic and cultural, the objective being to reintegrate India economically and culturally with our civilisational neighbours of South East Asia. In December 2012, the Association of South East Asian Nations (ASEAN)-India Commemorative Summit was held in New Delhi to signify two decades of India’s Look East Policy. Growing trade ties have corresponded with the expansion of relationship in the areas of defence and security; the engagement which was primarily political and economic has acquired strategic content in the recent years. India and countries of South Asia share many threats and challenges especially in the areas of non-conventional security. India and South East Asian nations have been strengthening their defence and security relationship both at bilateral and multilateral levels to address such threats. Defence cooperation with ASEAN members is geared primarily towards exchanges of high-level visits, strategic dialogues, port calls, training exchanges, joint exercises and provision of defence equipment.

The Prime Minster during his visit to Myanmar in April 2012 observed that both India and Myanmar need to “expand security cooperation that is vital not only to maintain peace along our land borders but also to protect maritime trade which we hope will open up through the sea route between Kolkata and Sittwe”.

Recently, India ramped up cooperation with Myanmar through high level visits by the Defence Minister A.K. Antony in January 2013, and last year through the visit of Chairman Chiefs of Staff Committee and Chief of the Air Staff Air Chief Marshal N.A.K. Browne from November 26-29. The Myanmar Army has been looking for hardware and India has been providing items such as transport aircraft, helicopters and other defence equipment. India is also focussed on expanding training and capacity building of the Myanmar armed forces. Further, Myanmar Navy has been regularly taking part in India’s Milan series of naval exercises since 2006.

Malacca Straits is the pivotal transiting point through which most of the oil and gas transportation of India, South East and East Asian countries take place. Increasing incidence of piracy for ransom and smuggling in the high seas, which threatens uninterrupted transportation of oil and gas, has prompted these states to secure the sea lanes. Here cooperation with Indonesia, Singapore, Thailand, Malaysia to secure Malacca Straits and the neighbouring areas, remains strategically important.

Malacca Straits are important to both India and Indonesia and the two countries signed a Defence Cooperation Agreement in 2001 and have had regular defence exchanges including the exchange of high level visits, ship visits, officers studying in Staff Colleges in either country and joint coordinated patrols in the mouth of the Malacca Straits. The Indonesian Navy ships have consistently participated in the MILAN series of exercise conducted near the Andaman and Nicobar islands by the Indian Navy.

Last October, Antony visited Indonesia to attend the first Ministerial level biennial defence dialogue between the two countries. Antony observed, “We have a vital stake in the evolution of balanced security and cooperation mechanisms through which we can build consensus and pursue dialogue. We seek to improve our partnership with all countries in the Indian Ocean Region on bilateral basis as well as through multilateral platforms like Indian Ocean Naval Symposium (IONS), Indian Ocean Rim Association for Regional Cooperation (IOR-ARC), etc.” India has also been supporting the freedom of navigation and United Nations Convention on the Law of the Sea (UNCLOS) though South China Sea where some of the ASEAN countries are at the receiving end of China’s assertive policies.

Further, as part of deepening its engagement with the South East Asian countries through military-to-military relations, India has provided access to Singapore armed forces to use Indian training facilities like Air Force and Artillery firing ranges. Singapore has signed the Defence Cooperative Agreement in 2003 and a Bilateral Agreement for the Conduct of Joint Military Training and Exercises in India. Naval exercises between both the navies are being conducted annually since 1994. In 2011, the naval exercise between both the navies was conducted in South China Sea and the shore phase of the exercise was conducted at the Changi Naval Base of Singapore.

The third country which remains important in the context of Malacca Straits and adjoining maritime area is Malaysia. India-Malaysia defence relations have been growing over the years after signing of Memorandum of Understanding (MoU) on Defence Cooperation (MIDCOM) in 1993. The ninth meeting of the MIDCOM was held in Kuala Lumpur in January 2012. India’s Chief of the Air Staff visited Malaysia in February 2012 and Malaysia’s Chiefs of Army and Navy both visited India in April 2012. The IAF Training Team deployed in Malaysia trained Malaysian pilots on the Su-30 MKM aircraft for two-and-a-half years since February 2008. Malaysia has also been looking for training its Scorpene submarine crew and maintenance of the submarines. These are the areas where both sides can cooperate as India is also acquiring such submarines.

Thailand is another important Indian Ocean littoral state with which India shares maritime boundary. Cooperation between the two countries based on the Joint Working Group on Security established in 2003, has been now upgraded to include defence exchanges. The first meeting of India-Thailand Defence Dialogue was held in New Delhi in December 2011 and a bilateral MoU on defence cooperation was signed in January 2012. The current defence cooperation comprises regular joint exercises, coordinated maritime patrols near the international maritime boundary to counter terrorism, piracy and smuggling; training of officers at each other’s armed forces training institutions and participation as observers in military exercises. Defence Minister A.K. Antony visited Bangkok in June this year. The two Ministers reviewed regional security situation and expressed their support for collaborative regional mechanisms such as Asian Defence Ministers’ Meeting Plus (ADMM Plus) for maintaining regional peace and security, freedom of navigation, keeping open sea lines of communication (SLOCs) and cooperation in areas such as anti-piracy, disaster relief and rescue.

Securing SLOCs and Malacca Straits is also important for the South East countries like Vietnam that has intensified its defence relationship with India. For the ASEAN countries it is geo-strategically prudent to forge a defence relationship of a greater or lesser degree with India and/or the US as some sort of balance of power arrangements possibly against a rising and assertive China, is hardly going to remain status quoits.

A MoU between Vietnam and India was signed in 2009 for defence cooperation though the defence exchanges between both the nations started prior to this period. India and Vietnam face a common challenge from China and both have been target of muscular policies of China. Some of the engines of Vietnamese MiG-21 aircraft have been overhauled in India. There are also mechanisms for sharing of strategic perceptions and naval cooperation between the two countries. Coordinated patrols by the Vietnamese sea–police and the Indian Coast Guard are conducted jointly in addition to training of Vietnamese Air Force pilots. Besides providing some defence equipment, India has also been helping Vietnam to set up a domestic defence industry.

Similarly, India has defence cooperation and exchanges with Cambodia, Laos, Brunei and Philippines. For instance, India is setting up an Air Force Academy in Laos. An Indian military delegation led by the Army Chief visited Laos in December 2011. Discussions revolved around ongoing defence cooperation initiatives between India and Laos. The Army Chief reaffirmed commitment to the capacity building of the Lao People’s Army and discussed a range of defence cooperation initiatives with the Lao Army leadership. The delegation visited the Kaysone Phomvihane Academy for National Defence, where a two-member training team from the Indian Army has been in place for the last 15 years.

Exchange of visits of defence officials, goodwill visits by Indian naval ships to Cambodia’s ports, gift of medical equipment and other stores and imparting of training courses to Royal Canadian Air Force (RCAF) personnel in demining and peacekeeping operations have been part of the defence exchanges. On the security front, India and Cambodia have signed an Agreement on Combating International Terrorism, Organised Crimes and Illicit Drug Trafficking in December 2005. With Brunei there has been some degree of defence cooperation with Indian naval ships participating in the first-ever Brunei International Fleet Review to mark the 50th anniversary of Royal Brunei Armed Forces.

With defence cooperation between the two countries having been formally established through the 2006 Philippines-India Agreement Concerning Defence Cooperation, Indian Navy and Coast Guard ships regularly visit the Philippines. The participation of officers of the armed forces of both countries in various specialised training courses in each other’s countries has increased. There are also arrangements for sharing of intelligence and perceptions on certain other sensitive issues. To enhance the defence cooperation further, a Joint Defence Cooperation Committee was constituted which had its first meeting in Manila in January 2012.

At the multilateral level, India has also become a member of ASEAN Defence Ministers’ Meet–Plus Eight (ADMM-Plus). The basic objective of creating this framework was to bring about cooperative security, especially in the areas of humanitarian assistance, disaster relief, maritime security, counter-terrorism and peacekeeping operations. ADMM-Plus Eight has also proposed furthering of bilateral and multilateral dialogue and sharing of expertise among the military forces of member states. The arrangement also advanced proposals to counter particular threats and issues such as piracy and natural disaster through joint military exercises.

Both India and ASEAN members have been on an upward economic trajectory and as they grow, the security and strategic environment has also been becoming complex. While these nations have been in a beneficial economic relationship with India and China, they remain wary of China’s growing assertion and irredentist tendencies. India’s efforts in defence cooperation with ASEAN also aims at addressing its own strategic concerns both in Indian Ocean littoral as well as in South China Sea. Both the Ministry of Defence and Ministry of External Affairs need to coordinate their efforts in order to add meaningful substance to the evolving defence and security relationship with the ASEAN members as part of a composite endeavour to achieve success in the strategic objectives of its Look East Policy.