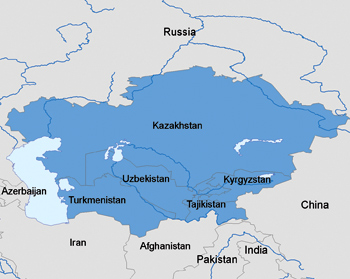 The Central Asian Region (CAR) comprising Kazakhstan, Kyrgyzstan, Tajikistan, Turkmenistan and Uzbekistan measures some four million square kilometers and is inhabited by just over 64 million people with most population concentrations in the Ferghana Valley, its periphery, and the north of Kazakhstan. With GDP of $166 billion and per capita GDP of $2,700, access to sea ports range from 2,770 kilometers to 5,500 kilometers. Alternation in expanses of desert and mountain ranges has led to vast unpopulated areas lying alongside other relatively densely populated areas. Many are unaware that bulk of present day Indian population has its ancestry in CAR and it is the eastward migration of CAR inhabitants centuries ago on account of drying up of river basins that led to the origin of Indus Valley Civilisation.

For the CAR, unexpected breakdown of USSR did create chaos with territorial disputes erupting overnight, but it also created new opportunities including new partners and allies. The US, Turkey, Iran, India, Pakistan, China and Russia were quick to establish relations with the new countries. What is referred as the ‘New Great Game’ today, actually is the modern version of the traditional power plays in the region by the major players (Russia, China, the US) due to the increasing importance of Central Asia stemming from existence of vast reserves of hydrocarbons (oil and gas) and minerals like uranium, plus its strategic position as a link between major markets of Europe and Asia. The region is inexorably linked to Afghanistan with growing uncertainties post 2014. A regional security perspective must include internal dynamics of CAR and the external factors. The security paradigm in Central Asia is often not regionally interrelated and interdependent but influenced by external powers on an individual state-unit rather than regional level, multilateral security frameworks notwithstanding. CAR countries have differing attitudes towards external attempts to influence regional politics and security. For example, 80 per cent of the US investment in CAR is in Kazakhstan, which is perhaps not liked by some other CAR countries. It would not be wrong to say that Uzbekistan and Turkmenistan regard the US influence in the region as a threat in itself. Therefore, CAR countries can be expected to respond at different levels to foreign interventionist presence despite possibility of increased Taliban influence in Afghanistan.

Economy, unemployment, drug trade, illicit weapons are factors that contribute to instability in any country coupled with lack of governance, inept handling of social change, lack of avenues of political expression and justice. Central Asia is an area offering certain geo-economics advantages to countries or multinational corporations that have particular regional or global aspirations, due either to their own interests or to the need to neutralise other nations or companies which they see as rivals. As per the International Monetary Fund (IMF), in Caucasus and Central Asia, the economic outlook remains favourable, reflecting high oil prices that are benefiting oil and gas exporters, supportive commodity prices and remittance inflows benefiting oil and gas importers, and, for both groups, moderate direct exposure to Europe. The positive outlook provides an opportunity to strengthen policy buffers to prepare for any downside risks. However, the outlook on unemployment, drugs and illegal weapons, is not that bright. The economic crisis has caused millions of migrant labourers from Tajikistan, Kyrgyzstan and Uzbekistan to lose their jobs in the boom economies of Russia and Kazakhstan. Unemployment rates in Kazakhstan, Kyrgyzstan and Uzbekistan are 6.1 per cent, 8.2 per cent and eight per cent respectively, which are manageable. However, Tajikistan and Turkmenistan have unemployment rates of 60 per cent and 70 per cent respectively. This in conjunction with their immediate neighbour Afghanistan’s unemployment rate of 36 per cent, form a trilateral of instability conducive to terrorism, especially since this large unemployed segment has access to vast quantities of drugs from both Afghanistan and Iran. In 2009 itself, some 90 metric tonnes of drugs came from Afghanistan. Then is the problem of illegal weapons which has alarmed most CAR countries and seizures by security forces has taken place in Tajikistan, Kyrgyzstan, Kazakhstan and Uzbekistan. Gun running in CAR is endemic with illegal weapons coming from Russia, China, Iran and Pakistan, latter via Afghanistan. In June 2012, Kyrgyzstan admitted that only half of the small arms that went missing during the country’s 2010 political and ethnic violence have been accounted for and the missing quantities are considered enough to carry out another revolution.

Another important factor contributing to instability and insecurity in the CAR is border disputes. For example, borders among Kyrgyzstan, Uzbekistan and Tajikistan are not properly defined. Ferghana Valley is rife with territorial disputes, especially in densely populated areas with competition for resources and friction periodically erupts into violence among Kyrgyz, Tajiks and Uzbeks. Ferghana Valley is also teeming with various extremist/terrorist elements and their role in larger conflicts cannot be discounted. There has also been problem of rivalry like between Uzbekistan and Kazakhstan. Serious ethnic divisions like in Kyrgyzstan in June 2010 caused hundredsof people and mostly Uzbeks killed, and over 2,000 homes and buildings destroyed. There is also the risk that Central Asian jihadis currently fighting alongside Taliban in Afghanistan may take their struggle back home after 2014. This would increase instability and pose major difficulties for Central Asia and even China. Tajikistan already faces a threat from the Islamic Movement of Uzbekistan (IMU), a group with a vision of an Islamist caliphate that is fighting in Afghanistan alongside the Taliban.

There is no denying that USA and China are rivals competing for the booty of untappedmineral wealth and hydrocarbons, straddling the vast expanse from the Xinjiang-Kazakh/Kyrgyz border to the western shores of the Caspian Sea. Their individual perceptions, how best their political and economic interests can be served, differ vastly in geographical terms.

Threats and problems that confront the CAR can be summarised as follows:

The security interdependence between states in the region is particularly intense because of the nature of perceived security threats. Transnational non-traditional security threats dominate the Central Asian security narrative, implying that these have an extensive impact on the region and require a regional response but regional security dynamics are defined by mutual suspicion. Over the past few years, SCO and CSTO appear to be staking out complementary rather than competing mandates. There appears to be under-the-surface competition between the two groups. The new International Crisis Group (ICG) writes in its report titled “China’s Central Asian Problem” that Russia continues to seek military influence in Central Asia but has become increasingly distrustful of the SCO and Chinese intentions. It also notes that China has not been able to match its ambitious economic moves with political and military muscle because of strong Russian influence in CAR security structures. Russia continues its monopoly of arms sales to CAR. Therefore, relations between CSTO and SCO remain uncertain and potentially competitive but these organisations have proved ineffective in crisis. ICG assesses that in case of a power vacuum in the region, even if either China or Russia is willing to intervene militarily in Central Asia, China may take the lead. However, this ICG assessment is just one view. Post 2014, there is also good chance of Afghanistan increasingly integrating with Afghanistan and SCO assuming greater role in Afghanistan. Simultaneously, there is also possibility of more CSTO-NATO cooperation since China cannot provide security for its investments in the region, particularly Afghanistan, and Russia understands adverse effects of radical dispensation in Kabul.

Despite all the overtures made to Pakistan over the decades by India including grant of the MFN status, a radicalised Pakistan obsessed by hatred has continued not to open trade and grant MFN status to India and facilitate the land route for India to trade with Afghanistan and CAR. South Asian markets, especially India, are important to CAR and Afghanistan for trade and easy business. Concurrently, India needs the hydrocarbons of CAR for its energy needs. Indian goods have been routed to Afghanistan through the Chahbahar port in Iran and through Dubai and will continue to do so also with the CAR while Pakistan brews in its own stew.

The regional security perspective in CAR is fluid and has varied possibilities. Finally, the quantum US troops in Afghanistan post 2014, Pakistan’s capacity of mischief, the posture of Taliban, level of instability in Afghanistan and possibility of another international force (like from OIC countries) are a matter of speculation but CAR countries certainly need to integrate more intimately into the security framework.