'The profession of arms is a 'calling', rather than being just a job' 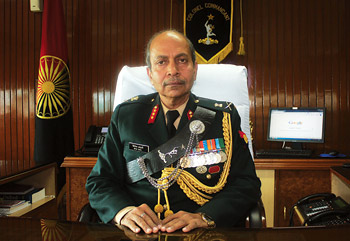 Communications and electronic surveillance provide critical support in handling of counter-insurgency and terrorist operations. Lt General Nitin Kohli, Signal Officer-in-Chief and Colonel Commandant, Indian Army, in an interview with SP’s Land Forces, gave out details of the role played by the Corps of Signals in the areas of low-intensity conflict and counter-insurgency operation.

SP’s Land Forces (SP’s): Can you define the role and give out the charter of duties of the Corps of Signals?

Lt General Nitin Kohli (SO-in-C): The Corps of Signals as “Information Warriors” are responsible for providing telecommunication and information connectivity to the Indian Army. It has also been charged with the responsibility of providing substantive communication support to the Indian Air Force and Navy. The Corps, based on these requirements, is the key enabler of the transformation process of Indian Army towards net-centricity.

SP’s: The challenge today is to achieve successful integration of sensors, shooters and the decision-makers, thereby enabling a dynamic, reliable and secure operational decision loop. How far have we achieved this capability? Where we are as far as network-centricity is concerned? It seems that the Air Force and the Navy are far ahead in this field. May we have your observations and comments on this vital issue?

SO-in-C: Net-centricity in functioning of the Indian Army is the ultimate goal given by the Chief of Army Staff (COAS). This is to be achieved in three stages. We have already completed the stages of “networking” and “net enabling” the Indian Army. Various applications to achieve the desired net-centricity in functioning are under development. These will facilitate availability of the networks at both the sensor and shooter end in real time.

SP’s: Will the Indian Army’s present communications allow it the flexibility required for future operational settings both conventional and fourth-generation wars?

SO-in-C: I am confident that the Corps of Signals is ready to meet all the challenges of a conventional or futuristic war.

SP’s: What is your vision for the Corps of Signals?

SO-in-C: The vision of the Corps of Signals is to attain and maintain information ascendancy by developing a robust and secure information infrastructure to cater to the network-centric warfare in the digitised battlefield of future times.

SP’s: Software defined radio (SDR) is receiving enormous recognition and generating widespread interest in the telecommunication industry and in the military. What is your view on it?

SO-in-C: SDR is one of the best technological advancements in the field of electronics and IT which will be adequately harnessed by the armed forces in the near future. It offers a host of benefits such as standard architecture for a wide range of communication products, uniform communication across various users, significant cost reduction, over the air downloads of features and services, advanced networking capabilities, etc. SDR development is an extremely complex process.

The proposed SDR will also have the requisite waveforms to integrate with the existing legacy systems.

SP’s: Can you give out the mobile and offensive communication needs of the Army and how are these being met?

At present the requirement of mobile and offensive communication is being met by combat net radio (CNR) and army radio engineered network (AREN). Fibre network has also reached the forward edge of our operational locations to handle the high bandwidth communication needs of the field formations.

SP’s: What are the developments envisaged in combat net radio?

SO-in-C: Combat net radio is the cutting edge communication in tactical battle area. The Corps of Signals is always thinking ahead of ways to usher in state-of-the-art communication technologies to empower the soldier. Our focus is to bring about a paradigm shift in exploiting radio technologies with versatile features.

SP’s: How is the interoperability being ensured between the Army, the Navy and the Air Force and other concerned civil agencies, in the absence of integrated development of communications?

SO-in-C: Interoperability between the three services has always been high on the agenda of all commanders. This has been given due importance through an important strategic network which will connect important tri services locations across India to provide common fabric for communication and information requirements. This project is under implementation and its completion would form the bedrock of interoperability between the three services.

SP’s: With both China and Pakistan being so active in the field of cyber warfare what steps are being taken to ensure cyber security in the Army’s communication networks?

SO-in-C: In the cyber domain, threats are continuously evolving and the race between security system designers and those who want to exploit weaknesses is ever prevalent. The only viable option is to plug the weaknesses by being proactive. We are constantly evaluating our security threats and plugging the loopholes on almost daily basis. Organisations with requisite resources are in place with well-defined charter and standard operating procedures (SOPs). The triad of “people, processes and technologies” is being effectively implemented to achieve the desired end towards securing our networks.

SP’s: What are your roles in low intensity conflict like terrorism and insurgencies?

SO-in-C: Communications and electronic surveillance provide critical support in handling of counter-insurgency and terrorist operations. These roles have been addressed by the Corps of Signals in the areas where low-intensity conflict and counter-insurgency operations are being prosecuted.

We have established an Army owned pilot mobile cellular system which has proved to be a great force multiplier in providing real time information to our ground teams operating in inaccessible areas during the conduct of counter-insurgency operations.

SP’s: What are the developments for dominating electromagnetic spectrum in future wars? Are we acquiring state-of-the-art equipment in the field of electronic warfare? Are our systems capable of conducting static and mobile operations?

The electronic warfare equipment being procured is state-of-the-art and targets advance communication and surveillance system acquired by the adversary. Substantial indigenous capabiliy also exists in the field.

SP’s: Is the industry geared to provide modern hardware and software technology to support communication requirements in the future?

SO-in-C: India is one of the fastest growing IT markets in the world with leading international giants establishing their bases in India. IT is a vital enabler in enhancing reach and productivity in all kinds of verticals. Private industry in India has certainly geared up towards providing robust and scalable software solutions with somewhat limited hardware development infrastructure to support the communication requirements of the Indian Army.

As of now, our indigenous capability to manufacture micro-chip is very limited. There is an urgent need to develop research and development (R&D) and production capability to meet requirements of our armed forces if manufacturing of chips in India, keeps pace with the software development, it will go a long way in improving cyber security.

SP’s: How does the Corps of Signals keep pace with the fast developing information and communication technologies in the world? Do you have a cell monitoring this important aspect regularly? Are any officers attending courses in the western world?

SO-in-C: Continuous training and unflinching endeavour to keep oneself abreast with current development is the only way to keep pace with the rapidly changing technologies in the field of information, communication and technology (ICT). We are thus seized of this challenge and are making multipronged efforts to keep pace with the changing technology. To this end, in our training institutions, viz., Military College of Telecommunication Engineering (MCTE) and Signal Training Centres (STCs), environmental scan, evaluation and syllabus upgradation are a continuous process. We also have our officers going to the IITs for doing post-graduate courses. We are also utilising the facilities of government institutes like the Bharat Ratna Bhim Rao Ambedkar Institute of Telecommunication Training (BRBRAITT) and National Institute of Technical Teachers Training and Research (NITTTR) to provide training to selected trainers. Moreover, implementation of various projects, offers an opportunity to our officers to be exposed to new technical options and upgrade themselves.

SP’s: What future role do you envisage for the information warriors of the Corps of Signals?

SO-in-C: In the future, we envision the Corps of Signals to be the cutting edge difference for the Indian Army by providing real time, state-of-the-art effective means of communication and decision-making in an evolved net-centric Indian Army. This shall help the Indian Army attain information superiority and ascendancy in the next generation wars.

SP’s: The information and communication field is very vast and the demand for qualified personnel is also high in the private industry? How do you ensure that qualified officers are motivated to stay on in the arm? What are the incentives, in your view, which will prevent the younger officers from leaving the Army?

SO-in-C: Here I take the view that the profession of arms is a ‘calling’, rather than being just a job. Therefore, the truly motivated will continue to serve in the right earnest. The sense of satisfaction and prestige derived from donning the uniform is much greater than any other monetary/positional aspect. The attraction of career opportunities in the private industry, however, is a live challenge. To address this, we are striving to increase the promotion avenues in our Corps, to meet the career aspirations of the officer cadre. For meritorious officers, who are non-empanelled, there exist lateral avenues to Directorate General of Quality Assurance (DGQA), Defence Research and Development Organisation (DRDO), National Disaster Management Agency (NDMA), etc on deputation. Also, irrespective of non-empanelment, depending on their proficiency and technical acumen, officers continue to be posted to high-tech appointments, dealing with important projects. Employment in domain expertise appointment also enables us in keeping our officers motivated.

SP’s: How are the women officers performing in the Corps of Signals?

SO-in-C: The Corps of Signals has been posted with women officers since 1993. Women officers have made valuable contributions to the organisation over the last 20 years. They are holding all positions in the Corps, such as tenanting high-tech appointment, instructors at institutes, staff officers in various headquarters, participation in adventure activities, implementing ICT projects in units/establishments, etc. As on date, the Corps has 189 women officers.