Target acquisition is the detection, identification and location of a target to such a degree that it can be effectively neutralised or destroyed 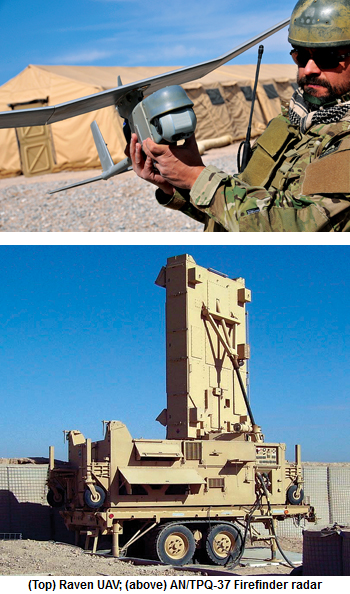 In its earlier years, artillery guns fired directly at the targets due to limited range thus acquisition and engagement of targets was easy but as the range of the guns increased, it was not possible to aim at the target from the gun end. Thus evolved the system of observation post officers (OPs) who deployed ahead of the guns to a position from where they could see the target, calculate its position from a map and pass the target data to the gun end through a radio or line or both. For obvious reasons the deployment had to be on own side of the border or at a safe distance. The ballistic data was then calculated for the target and the guns fired. OP officer then corrected the fall of shot, accuracy of which was effected by weather conditions, effect of gravity and zone of the gun. As the range of gun increased, it became more difficult to see the target by a ground OP which resulted in the employment of an airborne OP which was named Air OP. Earlier the platform was a small fixed-wing aircraft and currently they have rotary-wing aircraft. There were many developments to improve target acquisition at night by the use of night vision devices, use of UAVS for acquisition and assessment of damage of distant targets, technology to engage small targets and moving targets, automatic target recognition and technologies for precision engagement of targets. The advent of missiles including cruise missiles made target destruction, faster, and accurate in all-weather conditions. As usual the United States leads in all these technology developments.

This article pertains mainly to artillery RSTA and precision technologies.

Target acquisition is the detection, identification and location of a target to such a degree that it can be effective neutralised or destroyed. But before this process is initiated there is a requirement to carry out RSTA. The RSTA systems play an increasingly important role providing armed forces with situational awareness and target acquisition. Electro-optic infrared, radar and laser systems provide the army with exceptional battlefield capabilities. These systems are integral to the target acquisition and reconnaissance (ISTAR) capabilities of the modern military forces and seen as a critical force multiplier. These systems are mounted on vehicles to provide them mobility. The Defense Advanced Research Projects Agency’s (DARPA’s) contributions to RSTA and precision guided munitions (PGM) started in the 1960s working on an array of technologies including lasers, electro-optical sensors, microelectronics, data processors and radars which would eventually become critical components of the first precision systems. PGMs are ideal for surgical strikes. Some examples of a few developments in RSTA technologies by DARPA are:

Improving Position, Navigation, and Timing (PNT) Without GPS. PNT is an essential element for the warfighter but PNT depends upon satellite signals which is potential vulnerable. To overcome this, DARPA is developing a family of highly precise and accurate navigation and timing technologies that can function in case the GPS is jammed.

Advanced sensor and radar technology. The advancements in this field have made it possible to detect small targets, such as armoured vehicles in adverse weather conditions or under camouflage. DARPA’s Jigsaw programme has developed a 3D imaging laser radar able to detect vehicles masked by camouflage or foliage. Its foliage-penetrating RSTA and engagement radar enable unprecedented detection of targets concealed by obstacles.This would be ideal for India’s Anti-Maoist operations in the eastern region.

High-altitude LIDAR Operational Experiment (HALOE). This system provideds a very high quality high-resolution 3D data, at a very fast rate and from much longer ranges. This was employed in support of US forces in Afghanistan.

Night into Day. From the beginning of warfare, cover of darkness has always put the defence forces at a disadvantage. Starting with low-tech illuminating flares, the systems progressed to sophisticated image-intensification goggles that are able to amplify very small parts of ambient light. While other research entities have focused on image intensifiers that amplify small amounts of visible light, such as starlight, DARPA’s investments have focused primarily on thermal imaging, which enables vision under no-light conditions by detecting thermal wavelengths in or near the infrared range. Highly heat-sensitive imagers can detect adversaries who are in camouflage during the day or night, and can determine not just the presence of a vehicle but whether it has been operated recently by detecting residual engine heat. Significant investments in the field of cryogenically cooled, very-highperformance infrared imagers, which use chilled sensors to suppress background electromagnetic noise and increase sensitivity to low-energy signals. DARPA is also developing new processing technologies to fuse data from multiple sensors observing multiple objects, and to automate the detection of objects and activities of interest. To solve the problem of identification of threats, work is going on using advanced pattern analysis, discovery and prediction algorithms, which hold the promise of offering enhanced support for time-sensitive operations.

Thales was awarded contracts to design and build system by combining optronics sensor head and integrated C2 which offers discretion, protection, survivability and quick deployment. It is an all-weather system with a retractable telescope mast. The optronic head integrates compact thermal camera (CATHERINE) which provides high day/night performance. Thales’ ORS is meant for Artillery of UAE . It is an artillery forward observation and battlefield surveillance system, with multi-sensor capabilities (radar & optronics) mounted on a mast and fitted on M 113 vehicles.

Long-range Advanced Scout Surveillance System (LRAS3). The LRAS3 is a longrange multi-sensor system for the US Army scout, providing detection in real-time, recognise, identify and geo-locate distant targets. The LRAS3 gives 24-hour capability with the combination of: Forward-looking infrared (FLIR) sensor, GPS, Eyesafe laser rangefinder and Day TV camera. It can be mounted on any high mobility vehicle like the Stryker or a Humvee truck It can also be deployed dismounted.

Long-range Scout Surveillance System (eLRAS3). eLRAS3 is the next generation long range scout surveillance system with third-generation FLIR. eLRAS3 meets or exceeds all LRAS3 requirements, with a 55 per cent reduction in sensor weight and volume and is fully compatible with all existing LRAS3 platforms.

Weapon Locating Radars (WLR). Location of enemy’s and then carry out engagements to neutralise them is done by WLRs. India has AN/TPS-37 and for shorter ranges a BEL made WLR.

Thales Raytheon’s AN/TPQ-37 Radars. After the lifting of sanctions on India during 2001, the US sold 12 AN/TPQ-37 Radars to India under the FMS programme. The radars were integrated on a Tatra truck. The Firefinder (FF) AN/TPQ-37 is a mobile phased array radar which automatically locates single or multiple hostile artillery and rocket launched weapons. The system then directs effective counter fire against the hostile weapon. The radar uses a combination of radar techniques, computer controlled signal processing, and automatic height correction to detect, verify and track the projectiles in flight, and to automatically extrapolate both the firing position and the impact point. The AN/TPQ-37 is capable of first round detection at ranges of 3 to 50 km, dependent on weapon type.

BEL Weapon Locating Radar (WLR). This is also a mobile phased array radar developed by India. This counter-battery radar is designed to detect and track incoming artillery and rocket fire to determine the point of origin for counter-battery fire. The WLR has been jointly developed by the Defence Reseach and Development Organisation’s (DRDO) Bengaluru-based laboratory, LRDE and the Government owned Bharat Electronics Limited (BEL). It has a range for artillery 2-30 km, for rockets 4-40 km and mortars 2-20 km.

COBRA of Germany. The COBRA (counter battery radar) is also a phased array radar which can locate mortars, rocket launchers and artillery batteries and to provide information for countering them. Has a detection range of 40 km and is capable of locating and classifying up to 40 batteries in two minutes.

Size of UAVs depends upon whether it is employed at platoon/company/battalion or brigade level.

AeroVironment’s RQ11BRaven. This is a lightweight tactical UAV, weighing 1.9 kg, which provides aerial observation, by day or night, at line-of-sight ranges of 10 km or more and provides real-time colour or IR imagery to ground control and remote viewing stations, as well as IR laser illumination of ground targets.

AAI (an operating unit of Textron Systems) Shadow®. The Shadow® is designated as the RQ-7B in US and operates at brigade level. It has range up to 125 km. RQ-7B transmits imagery and telemetry data directly to the Joint Surveillance and Target Attack Radar System, Advanced Field Artillery Tactical Data System and other systems in near real time.

General Atomics Aeronautical Systems’ Gray Eagle™ UAV. Gray Eagle® is an extended range/multi-purpose which can carry out the role for persistent RSTA and attack operations. It has an endurance of 25 hours, speeds up to167 knots, can operate up to 29,000 feet and carries 488 kg of internal and external payload. The aircraft can carry multiple payloads aloft, including EO/IR with laser designation, SAR, communications relay and four Hellfire missiles.

Israel Aerospace Industries’ (IAI) Searcher UAV. Searcher is a multimission tactical UAV which can carry out the role of surveillance, reconnaissance, target acquisition, artillery adjustment of fire and damage assessment. Searcher has been constantly improved from Mk 1 to Mk II and Mk II. The Searcher Mk II has multiple operational configurations, SAR/GMTI (Ground Moving Target Indicator), SIGINT and EO/IR has a maximum altitude of 23,000 ft, and of endurance of 18 hours and mission radius is 350 km.

IAI Heron. Heron 2 is the largest mediumaltitude long-endurance UAV built in Israel with an operational altitude of 45,000 ft and is capable of missions of more than 36 hours duration. It provides deep-penetration, widearea, real-time intelligence to national agencies, theatre commanders and lower echelons with primary role being intelligence, surveillance and target acquisition.

A PGM (also called smart weapon, smart munition, smart bomb) is a guided munition designed to precisely hit a specific target and also to minimise collateral damage. Brief details are given below.

M982 Excalibur. This is a 155mm extended range guided artillery shell developed by Raytheon Missile Systems and BAE Systems AB. It is a GPS-guided munition, capable of being used for close support of within 75-150 m of friendly troops. It has a range of 40-57 km and circular error of probabality (CEP) of around 5-20 m. Excalibur was developed as a longer-ranged alternative to conventional artillery shells with GPS guidance for improved accuracy.

M712 Copperhead. This can be fired from a 155mm calibre, is fin-stabilised, terminally laser guided, explosive shell intended to engage hard point targets such as tanks, self-propelled howitzers or other high-value targets. It can be fired from many types of 155 calibre artillery guns like M777, M198, etc. The projectile has a minimum range of 3 km and a maximum range of 16 km. For Copperhead to function, the target must be illuminated with a laser designator. Once the laser signal is detected, the on-board guidance system will operate the steering vanes to manoeuvre the projectile to the target. Copperhead operates in two modes. With good visibility and high cloud ceiling, Ballistic mode is used. Glide mode is used with low visibility and low cloud ceiling.

M898 155mm Sense and Destroy Armour (SADARM) shell. SADARM can be fired from a normal 155mm artillery gun. SADARM shell has a nose-mounted M762/M767 fuse set to burst at 1,000 m above the target to release two SADARM submunitions. The submunition is ejected from the projectile with the help of two parachutes. Each sensor with the submunitions has a millimetre radiometer which scans an area of 150 m in diameter that tracks and guides the submunition onto the target.