In a rare media interaction with SP’s Land Forces, Ashok Kumar Gupta, Secretary, Defence Production, outlined his vision for defence manufacturing in India and addressed a wide range of subjects including ‘Make in India’, DPP 2016, defence offsets, role of DPSUs, investment in R&D, delays in procurement decisions, blacklisting and other related issues 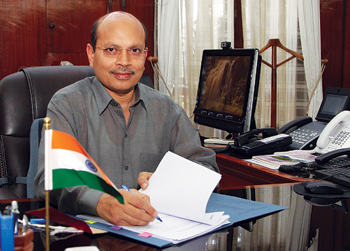 SP’s Land Forces (SP’s): In your opinion, what are the new key points of DPP 2016 for a foreign OEM looking at Indian market?

Secretary: India is in the midst of modernising its armed forces and it is estimated that $250 billion will be spent on capital procurement in the next 10 years. In the new Defence Procurement Procedure 2016, ‘Buy (Indian-IDDM)’, ‘Buy (Indian)’, ‘Buy & Make (Indian)’ are the most preferred categories which means that increasingly request for proposals (RFP) will be issued to the domestic industry. The only way for the foreign OEMs to leverage domestic demand is to tie up with domestic companies either for collaborative R&D followed by production or through transfer of technology for production through joint ventures or they can set up their own manufacturing base.

In addition, a number of potential ‘Make’ projects have been identified by the department; which are likely to follow ‘Make’ procedure for development-cum-procurement. The foreign OEMs can collaborate with the Indian vendor, the prime contractor, for development for defence equipment.

Provisions have also been introduced to allow foreign OEMs to select Indian production agency of its choice for transfer of technology for maintenance infrastructure.

Moreover, offset implementation process has been made flexible by allowing change of Indian offset partners (IOPs) and offset components, even in signed contracts. Foreign OEMs are now not required to indicate the details of IOPs and products at the time of signing of contracts.

Services as an avenue of offsets have been reinstated with certain conditionalities.

SP’s: How exactly are the ‘Make in India’ initiatives for aerospace and defence sector being promoted? What has been the reaction of foreign OEMs to it till date?

Secretary: ‘Make in India’ initiatives for aerospace and defence sector are being promoted though various policy initiatives and amendments in procurement procedures which would result in ease of doing business, encourage and facilitate Indian private sector to participate in defence manufacturing, nurturing R&D culture in defence.

Following initiatives have been taken by the Department of Defence Production to boost the ‘Make in India’ in defence sector:

Offset implementation process has been made flexible by allowing change of Indian offset partners (IOPs) and offset components, even in signed contracts. Foreign OEMs are now not required to indicate the details of IOPs and products at the time of signing of contracts.

The foreign OEMs have exhibited a lot of enthusiasm to participate in ‘Make in India’ initiative. Several OEMs have entered into or are in the process of tie-ups with Indian defence companies for supply of defence equipment categorised as ‘Buy and Make (Indian)’ and ‘Buy and Make’.

SP’s: India has a large inventory of ageing weapons and equipment. How do you see the ‘Make in India’ play out where upgrades are required?

Secretary: The revised ‘Make’ procedure would be a significant driver for taking up upgrades of existing inventory of weapons and equipment. Under this procedure, the government has made provisions for 90 per cent funding of development cost. There is also a provision to take up development without government funding in low-risk projects. In both the cases there is assurance of orders. The upgrade projects, being lowrisk/low-investment projects, the Indian industry will be encouraged to take up such projects on priority.

SP’s: There seems to be a lot of interest from big Indian corporates who want to invest in manufacturing in the defence sector. How are you going to ensure that quality and safety standards are met by these companies who are new entrants in this sector?

Secretary: Delivery of defence equipment to armed forces by any company is subject to trials/testing and other quality checks prescribed as per terms and conditions of the contract. This ensures the quality of the item.

SP’s: The defence offset policy has not led to any import of core technologies for the defence sector. Can you comment on this?

Secretary: Defence offset guidelines encourage vendors for investment in terms of technology in Indian enterprises. They also provide for acquisition of critical technology by DRDO.

The defence offset guidelines provide full freedom to the vendors in selection of avenues for offset discharge. The utilisation/exploitation of any avenue is totally at the discretion of the vendor.