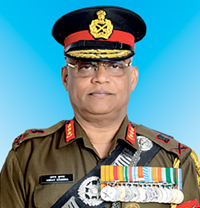 Lt Gen Abhay Krishna brings with him a great measure of professional competence and vast operational experience. A gallantry award winner in Counter Insurgency in Manipur, he commanded Rashtriya Rifles Battalion in the Kashmir valley. A thorough professional, he has served two tenures as UN observer, in Mozambique & Rawanda and another in Burundi.

He has served four tenures along the Line of Actual Control on the Northern Borders. He commanded an infantry battalion in Sikkim, was responsible for planning operations as BGS 3 Corps in the North East Sector and later commanded an infantry division and a Corps in the same area. After a stint in the South Western Command, he now assumes the responsibility of the Eastern Theatre.