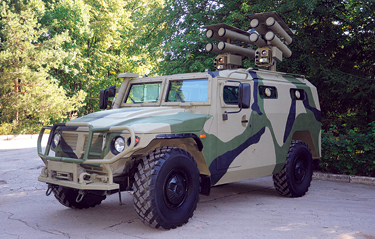 Main Performance Specifications of the System

Antita nk guided misile sys - tems (ATGM) have been developed and produced globally for already half a century. Since then they became the most popular and wanted type of high precision weapons (HPW) thanks to their usability and relatively low cost.

ATGM systems today are not just a specialized anti-tank weapon, they are also efficiently used to engage a wide range of other small dimension targets like lightly armoured and soft-skinned vehicles, various fortifications, manpower and elements of enemy’s infrastructure.

The IIIrd generation Kornet-E system developed by KBP and adopted in 1998 features a laser beam riding guidance system. It was the first ATGM system completely jamming proof and capable of firing on the move. As of today the Kornet-E ATGM system with a firing range of 5500 m is the most state-of-the-art specimen of multipurpose tactical short range weapon system which uses missiles with tandem shaped charge warheads for engagement of primarily heavily protected targets (tanks, pillboxes and the like) and missiles with high explosive warheads for engagement of a wide range of targets posing threat on a battlefield.

A future ATGM system must be a versatile defensive-offensive guided weapon, whose portable and combat vehicle transportable modifications ensure a wide range of applications in close range tactical zone in various combat environments.

The use of technical vision with automatic target tracker makes it possible to exclude an operator from missile guidance process and in fact implements the “fire-and-forget” principle without using expensive seekers in the missile. This gives a 5-times increase in accuracy of target tracking during real combat use and high hit probability at any system operating range which is twice higher than that of the Kornet-E ATGM system.

Engagement of targets in automatic mode reduces psychophysical stress to operators, requirements to their skills and duration of their training.

The block-modular principle of system design traditionally used for the Kornet family makes it possible to install both one and two automatic launchers onto a wide range of relatively inexpensive low load bearing capacity platforms of various origin (1 - 1.2 tons for single launcher version and 1.7 - 1.9 tons for double launcher version).

The combat vehicle with two launchers ensures simultaneous salvo firing against two targets, this significantly increasing the system’s firing rate and number of targets handled. Similar to Kornet-E, the Kornet-EM system retains salvo firing capability with two missiles in one beam against one target to get over active protection systems.

The system’s firing range was almost doubled – up to 10 km.

Efficient engagement of aerial targets by Kornet-EM system is ensured by combination of automatic high precision guidance system and guided missile with thermobaric WH with impact and proximity target sensor and flight range of up to 10 km.

The maximum flight range of the missile being equal to 10 km ensures Kornet-EM system’s advantage in fighting helicopters as it enables the system to fire from a stand-off distance.

Comparative analysis of the Kornet-EM system performance specifications with those of its foreign counterparts shows that in the aggregate the former 3.0 - 5.0 times exceeds the latter in terms of combat efficiency at the same time being simpler in use and maintenance and featuring 3 - 4 times cheaper ammunition which as an expendable component to great extent defines army operating costs.