Battlefield Management System for the Indian Army — A Review

Successful execution of fast moving operations, in the future, will require an accelerated decision-action cycle and an ability to conduct operations simultaneously within an all arms group 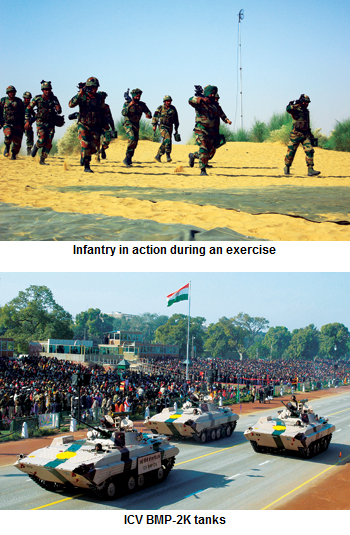 A Battlefield Management System (BMS) is vital in modern warfare as it enables faster decision by commanders at all echelons, better decision due to reliable operational information provided in real time and ability to quickly close the sensor to shooter loop. Situational awareness existing in the Indian Army is presently on ad hoc basis whereas the requirement is of an integrated network system. Future military operations will be combined and joint comprising of all arms and inter-service elements. These operations will require units and sub-units of other arms to operate subordinated or in cooperation with each other. Also, successful execution of fast moving operations will require an accelerated decision-action cycle and an ability to conduct operations simultaneously within an all arms group. The key to success will lie in effective command and control across the force, therefore, commanders at all levels, more so at the cutting-edge level require pertinent information in order to enhance their decision making and command capability. Harnessing information technology here will act as a force multiplier to enhance operational effectiveness of commanders and troops at all levels by enabling exchange, filtering and processing of ever increasing amounts of digital information presently available but not integrated. Most foreign armies including those that were deployed in operations abroad have situational awareness packages with the essential integration tool of various types — a Battlefield Management System.

Project BMS was envisaged by the Indian Army to enable a faster decision process by commanders at all echelons, enable better decision due to reliable operational information provided in real time and have the ability to quickly close the sensor to shooter loop by integrating all surveillance means to facilitate engagement through an automated decision support and command and control system, exploiting technology for mission accomplishment in the Tactical Battle Area (TBA) by rapid acquisition, processing and transfer of information, enhanced situational awareness, capability to react to information, sharpen ability to synchronise and direct fire, plus establish and maintain overwhelming operational tempo. The system customised to the specific army requirement, needs to be first integrated and tested in a controlled environment for which a test-bed laboratory will need to be established. After testing in the laboratory conditions, validation trials of the system will be carried out in field conditions.

After successful validation of the system in the field, the process for equipping will begin. The Army was late in conceiving this system, in that, planning for networkcentric warfare (NCW) capabilities below Brigade HQ level was not originally thought of along with other Operational Information Systems. The BMS will comprise a tactical hand-held computer with individual war-fighter and tactical computers at Battle Group HQ and combat vehicles enabling generation of common operational picture by integrating inputs from all relevant sources by integrated use of GIS and GPS with a high data rate. Phase I of Project BMS comprising test-bed laboratory and field trials at test-bed location of one Combat Group and three Infantry Battalion Groups by 2012 has been inordinately delayed, initially three years lost due to indecision within the Army concerning delimitation between the BMS and the Future Infantry Soldier as a System (F-INSAS) under development by the Infantry and concurrent fallout in re-ordering of the feasibility study. The Infantry insisted in handling Phase 3 of F-INSAS (Computer and Radio Sub-systems plus Software Integration) by themselves while DGIS was already developing the BMS including for Infantry. The BMS design caters for lightweight, ergonomics and long-range communication over portable SATCOM (Team/Troop Leader level), and sensor integration is integral to the project.

Project BMS was envisaged by the Indian Army to enable a faster decision process by commanders at all echelons, enable better decisions due to reliable operational information provided in real time and have the ability to quickly close the sensor to shooter loop by integrating all surveillance means

The BMS sought by the Army is to perform a variety of operational situational awareness and decision support functions at a battalion/combat group level. The lowest level to which the system will be connected is individual soldier/combat platform and the highest level will be the battalion/regiment commander integrating to the Tac C3I System through the CIDSS, enabling a common operational picture, integrating all sources through integrated use of GIS and GPS, will be a highly mobile and with high data rate. The communications should not interfere with the legacy communications; optimally utilise bandwidth available involving voice, data, imageries video streaming; scalable ensuring availability from being man-portable to being fitted in combat vehicles. For a BMS to be successful there is a need for a reliable, robust, resilient and efficient communication system that assures that the network is always functional. Net-centricity warrants a paradigm shift from voice centric to data centric systems and networks eventually enabling NCW capabilities.

For BMS communications the Indian Army would be looking for long ranges, high bandwidth data transmission (live streaming), facilitating messaging including voice mail, quickly deployable, self-configuring and self-healing networks, easy to customise, rolling coverage and interoperability. The focus will have to be on change in network topology, non-line of sight communications, spectrum management, network management systems, QoS (including latency, assured delivery, jitter), security of communications, networks and storage, robustness and authentication. Bandwidth requirements for the BMS need to be viewed keeping in mind the incremental requirements that would be required progressively over the years. A conservative approach by the Army at this stage, which is likely due to the limitations of legacy communication equipment, could limit exploitation of future technology.

Progress Over the Years

In end 2011, the Defence Acquisition Council (DAC) approved the BMS as a ‘Make India’ project, following which an Integrated Project Management Study (IPMT) was completed. The expression of interest (EoI) was prepared and the case for empanelment of industry to receive the EoI was pending with the Department of Defence Production (DoDP) and was expected to be issued to the industry by August-September 2013. Thereafter, it was envisaged to shortlist two Developing Agencies (DA) by about March 2014. Subsequently, design phase was expected to commence by July 2014, limited prototype tested in laboratory by end December 2015 and finally, prototypes developed and fielded for user evaluation by December 2016 (instead of earlier schedule of 2012). By then the cascading effect by then had already delayed completion of Phase 2 (Equipping) from initial plan of 2017 to 2021 and Phase 3 (Change Management and Upgradation of System) from 2022 to 2026 as per then status. This delayed schedule too was considered possible only if there were no further hurdles.

In February 2015, the EoI for BMS was finally issued to 14 domestic companies. However, only two consortiums, Tata Power SED-Larsen & Toubro, and Bharat Electronics-Rolta India, qualified the bids. In February 2016, the Ministry of Defence (MoD) signalled these two Indian consortia, one led by Tata Power (Strategic Engineering Division) and the other led by Bharat Electronics (BEL), to develop a BMS prototype for the Indian Army, which could eventually generate about Rs. 40,000-50,000 crore worth of procurement for the Army. As per media reports, MoD informed BEL and Tata Power SED in writing that the consortia they respectively lead had been selected out of four that had given proposals in response to the MoD’s tender. MoD has instructed both consortia, one consisting of BEL and Rolta India, and the other comprising of Tata Power SED and Larsen & Toubro (L&T), to register “special purpose companies” for this project. Each of these development agencies will separately develop a working BMS.

Each BMS prototype is to have four variants: one, for the infantry battalion group; two, for combat group (armour); three, for combat group (mechanised infantry); and, four, for Special Forces. Technologies to be included in each prototype include a geographical information system, multi-sensor data fusion system, rugged computing devices, and a software defined radio-based communication system for soldiers. Under ‘Make in India’, the government funds 80 per cent of the prototype development cost and the development agencies cover the rest. Prototype development is estimated at about $300 million, according to an executive of a domestic company participating in the consortium. Media quotes a senior executive from one of the consortia stating, “The challenge in developing a BMS is not on the hardware. With Indian vendors capable of manufacturing the latest state-of-the-art electronics, hardware will not be a challenge, but the challenge will be in deploying such a system. Considering the size of the Indian Army, an efficient command-andcontrol system is the heart of the system and the biggest stumbling block.”

The development agencies are free to choose overseas partners for technical assistance but the eventual tender will only be awarded to the domestic companies under the ‘Make in India’ category. The BMS prototypes will be developed and tested in the next 40 months; a final order of 600 plus such systems would then be placed for more than $5.8 billion. Once fully developed and proved, the BMS will be able to receive and transmit data, voice and images from multiple sources, including radar, cameras, laser range-finders and ground sensors, allowing the soldier on the battlefield access to real time information simultaneously with the commanders up the chain. It will be a critical element of the Army’s NCW capacity building as part of the Tac C3I. A project like the BMS is a multi-disciplinary process. It is, therefore, imperative that critical issues are addressed at the inception stage. For this, the test-bed must be in full, not truncated as has been the case in testing other operational information systems because of the void of the Tactical Communication System (TCS). A full test-bed would ensure that deficiencies do not crop up later at the fielding stage necessitating upgrades.

BMS for the Indian Army is an essential force multiplier that has been long overdue. It is good that this is being developed indigenously under ‘Make in India’, like the TCS. The biggest challenge naturally will be deployment on ground suiting every need of the Indian Army in varying terrain and environment conditions. Therefore, developing appropriate system would demand a great amount of flexibility without compromising on speed and security. The requirement no doubt will be colossal considering it will be fielded pan-Army at the battalion/regiment level, but similar system will eventually be required by the paramilitary forces (PMF) and even the Central Armed Police Forces (CAPF) and state police forces involved in anti-terrorist and counterinsurgency operations if we are to achieve national net-centricity to counter the increasing irregular threats from terrorists, non-state actors and state-sponsored nonstate actors.