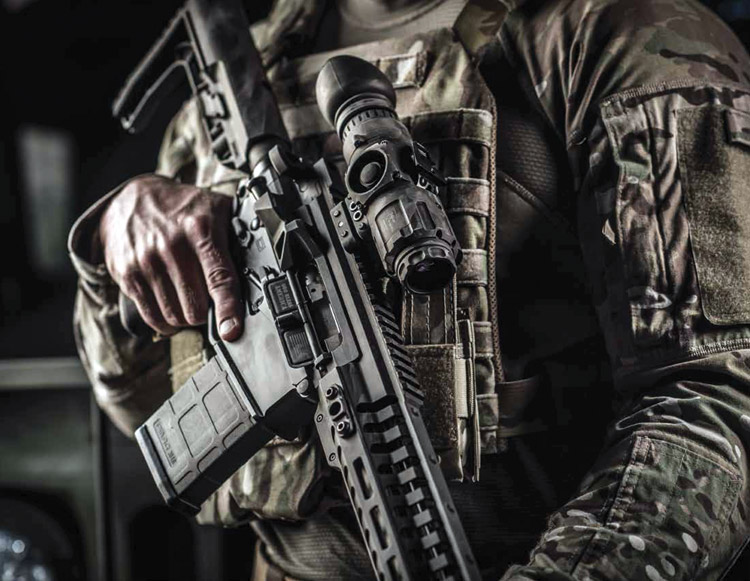 Electro–optical (EO) sighting and sensors systems have numerous applications for the Army to carry out surveillance, reconnaissance, target acquisition, target engagement and missile guidance. The system accesses information from emitted or reflected energy across the wavelengths of infrared, visible, and ultraviolet light, and thus can provide all weather, day and night fighting capabilities. The systems which operate on separate principle for thermal imaging and image enhancement. Thermal imaging functions in the upper region of the infra red spectrum whereas image enhancement works by accumulating and amplifying miniscule amounts of light including the lower end of the infra red spectrum so that it is possible to view the target. Normally it is the image enhancement product which are commonly called as Night Vision Devices (NVDs). The EO sighting systems will provide all weather surveillance and targeting sights for small arms, Armoured Fighting Vehicles (AFVs), artillery guns and missile systems. For AFVs first round hit probability is provided by Integrated Fire Control System which is a fully computerised fire control system, mainly consisting of stabilised day/night sighting system (s), laser range finder (LRF) with an integrated ballistic computer. This system facilitates acquiring, locking and engagement of moving targets by means of manual/automatic tracking, while own tank itself is on the move. The concept of first round hit capability is also applied to artillery systems by providing accurate target data by the forward observation post (FOP)officer through better electro-optical and geographic information system (GIS) systems.

Thermal Imager (TI) works on the principal that all objects emit a certain amount of radiation as a function of their temperature/ emissivity. Generally speaking, the higher an object’s temperature, the more IR radiation it emits. A TI can thus detect this radiation in a way similar to an ordinary camera does for visible light. It works even in total darkness because ambient light level does not matter. With the recent advancement and rapid development of IR detectors, it has become possible to carry out surveillance and target acquisition during night; similar to daylight hours. TIs have become the primary choice of defence forces for their weapon sights and surveillance equipment.

A TI camera mainly consists of an optical system, IR detector ,amplifier and signal processing electronics which can be seen on a display unit as the IR is converted into visible light. Most commonly used form of TI camera is Hand Held Thermal Imager (HHTI) which is normally based on cooled detectors and can see a group of persons at around 2.5 Km. Cooled TIs are also used as thermal sight for medium range weapons, Fire Control System (FCS) and surveillance system. TIs based on un-cooled detectors, which are generally cheaper, are used for short range applications. Gimbaled payloads with TI and other sensors have become very popular for various applications for UAVs, helicopters, AFVs etc as it provides stabilization for a moving platform.

Accurate range to the target is an essential parameter for engaging the target for which LRF has become an key device as it is very accurate. It works on the basic principle of emitting a laser beam which gets reflected from the target. A high speed clock then measures the time taken for the laser beam to reach the target and return to the emitter. This time is converted into range which can be seen accurately or directly fed into the ballistic computer. Thus LRFs have become an essential part of any FCS or to carry out artillery survey.

TOW ITAS. ITA S increases target detection, acquisition, recognition and engagement ranges; fires all versions of the TO W missile from both the M41 ground launcher and the M1121 high mobility multipurpose wheeled vehicle platform. It can also be integrated with future missiles systems. The ITA S includes a second-generation FLIR, an eye safe LRF and other digital components which increase detection and identification ranges by a factor of 2X, increasing the probability of hit over the existing TO W 2.

SAFRAN ELECTRONICS
Spider Artillery Fire Management System (FMS).
This is a sensor to shooter, fully integrated digital FMS which automates the entire firing chain starting from the Forward Observer who designates the target, down to the weapon platform, through the fire support’s assessment and coordination levels, which results in accurate firing, target effectiveness and short reaction time which is essential for artillery to be effective in battle.

TRIJICON
SNIPE-IR’s. It is clip-on thermal sight which is small and lightweight and designed to fit comfortably in front of the optical day sight for 24-hour weapon sighting applications. The SNIPE-IR’s NO-SHOT ZERO feature makes it simple to verify bore sight when attached. It offers easy sight-in integration for accurate calibrations with the 4x32 ACO G® and 3x and 4x day optics, as well as a large range of variable rifle sights.

Trijicon IR-PATROL®. For missions such as searching for a suspect or securing your position, the Trijicon IR-PATROL ® is the ideal multipurpose thermal imaging monocular. It’s compact, lightweight, rugged and offers some of the most advanced performance options on the market-such as MicroIR™ 640x480 12 Sensor and 640x480 digital OLED Display-for a clear, sharp image. The system can be handheld, helmet-mounted or rifle-mounted IR PATROL system.

INDIAN PERSPECTIVE
BEL Optronic Devices Limited. This is a subsidiary company of BEL. It has been established for conducting research, development and manufacture of Image Intensifier Tubes and associated high voltage Power Supply Units for use in military, security and commercial systems.

Alpha Design Technologies. Alpha Design Technologies Pvt Ltd., has been established with a view to put into action “MAKE IN INDIA” policy of the Government of India. ALPHA specialises in R&D, manufacture, assembly, testing, qualification, integration & installation of Defence Electronics, Avionics & Space Satellites systems. It has a Joint Venture with Elbit of Israel and has tied up with Adani Aero Defence Systems which is a part of the Gautam Adaniled group.