In last two months, India has re-started the process of replacing its arsenal of small arms, however going by past experience, replacemants on the ground seem distant 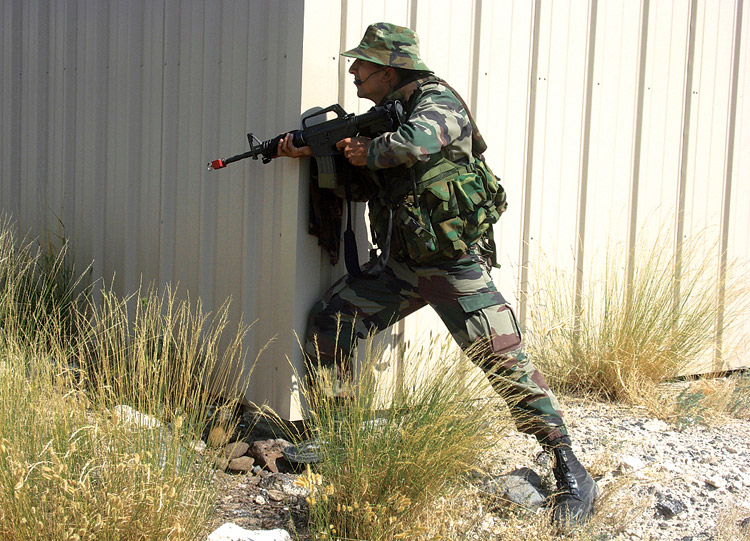 In previous two decades, multiple unsuccessful attempts were made to acquire these weapons. It is needless to say that it is high time that India replaces the older generation small arms which have become unfit for current operational needs.

All personal weapons that are part of the standard issue to any soldier which includes revolvers and self-loading pistols, rifles and carbines, assault rifles, submachine guns and light machine guns are defined as small arms. The former two are standard issues to the soldiery while the LMGs are “Section” (three sections in a platoon, and three platoons in a company) weapons issued in a fixed number to army units. Carbines, used in close quarter battles, are issued to commanders at various levels. Generally, people confuse small arms with light weapons which according to Small Arms Survey (1997 UN Panel of Governmental Expert report) are two different set of weapons.

Why do we need new weapons?

The battlefield requirements and military technology are interlinked. They keep evolving with respect to each other. To keep pace with the change in requirements, weapons evolve and armies are compelled to acquire new solutions to meet new challenges.

The battle field requirements have changed. The likelihood of conventional battles are few and far between and if at all we fight a conventional war it is more likely to be on the pattern of a border war/ skirmish, limited in time and space, such as the Kargil war 1999. But the more prevalent challenge in front of all militaries of the world are the fourth-generation hybrid warfare and counterinsurgency/counterterrorism (CI/CT) operations which includes fighting non-state actors in the urban, semiurban and jungle terrain. The requirements of this kind of sub-conventional war are better equipped soldiers capable of operating in all terrain and in all weather conditions in smaller groups and teams.

On February 28, Defence Acquisition Council (DAC ), chaired by Defence Minister Nirmala Sitharaman, accorded approval for procurement of 41,000 LMGs and over 3.5 Lakh Close Quarter Battle Carbines under Buy and Make (Indian) category. Out of total quantities envisaged, 75 per cent will be through Indian Industry under ‘Buy & Make (Indian)’ category and balance through OFB. The total cost for procurement of Carbines and LMGs for the soldiers of the three Services is 4607 crore and 3000 crore respectively.

Earlier in the month, on February 13, DAC approved procurement of essential quantity of LMGs for the three Services through the Fast Track Procedure at an estimated cost of over 1,819 crore. This will be over and above the decision of February 28. DAC also approved the much-anticipated procurement of 7.4 lakh Assault Rifles for the three Services. These Rifles will be ‘Made in India’ under the categorisation of ‘Buy and Make (Indian)’, through both Ordnance Factory Board and Private Industry at an estimated cost of 12,280 crore.

In another decision, it approved the purchase of 5,719 Sniper Rifles for the Indian Army and Indian Air Force at an estimated cost of 982 crore.

For the immediate requirement of the troops deployed on the borders, MoD, on January 16, gave its nod for the procurement of 72,400 assault rifles and 93,895 carbines on fast track basis for 3,547 crore.

Assault Rifle are expected to maintain a high degree of accuracy even in automatic firing mode. Some of the other features of ARs are robustness, dexterity – operational from both hands, flexibility to take add-on equipment and maintainability.

More than a million soldiers of Indian Army need replacement of indigenous INSAS (Indian Small Arms System) rifles designed and developed by DRDO and manufactured by Ordnance Factory, which have been found operationally inadequate. Thus the requirement of more modern and reliable rifles. In addition to the AR, the army also needs more accurate close quarter battle carbines. Currently, India is using Russian AK-47/56 for anti-terror operations in Jammu and Kashmir and North East.

There has been rethinking within the army over the AR’s calibre after using the INSAS with 5.56x45 mm. The army has now decided to go for bigger calibre rifles of 7.6x51 mm for more effective firepower.

In his annual press conference, on January 12, Army Chief Bipin Rawat had said that the Army will have two kinds of ARs. “The hi-tech rifles, for instance, will be only for infantry battalions deployed on the front. The bulk of the weapons will have to come through the indigenous route, the ordnance factories or the private industry.”

Militaries of the world want to arm their soldiers with personal weapons that are light, small, dexterous, automatic with a high rate of fire, which can be fitted with various kinds of sight and aiming devices and detachable under barrel grenade launchers for ARs. These also need to be easy to maintain and resistant to weather extremities.

These are primarily issued for the personal defence of commanders at various levels. Pistols are selected for their ease of pulling out, accuracy and lethality at short ranges and if required it should fire in both semiautomatic and single shot mode.

The basic weapon of any soldier is the AR which is a selective-fire rifle which can fire 1,000 rounds per minute, in automatic mode, at a distance of over 300 metres. These are also capable of semi-automatic and single shot firing. These are very effective in all kinds of engagements. ARs are expected to maintain a high degree of accuracy even in automatic firing mode. Some of the other features of ARs are robustness, dexterity – operational from both hands, flexibility to take add-on equipment and maintainability. Modern assault rifles come with Picatinny rail to add-on different kinds of accessories like sight and targeting devices.

These are basically short barrel rifles which fire pistol calibre bullets, like the famous MP-5. But with new demands of the CI/CT operations armed forces across the world are going in for medium calibre (5.56 mm) carbines. These are expected to be easy to handle with a high rate of fire to engage the enemy in all types of terrain including confined places like a building etc. Like AR, the modern carbines come with Picatinny rail.

Modern small arms are expected to be modular, easy to maintain and should allow add-on of accessories. A modern soldier is a system in itself

These are long barrel automatic guns with over 800 m range and also capable of the sustained rate of fire of over 600 rounds/ minutes. These are used for suppressive fire to pin down an enemy or to eliminate them at long distances. The defining characteristics of these guns are accuracy, high rate of fire, weight, robustness, ease of handling and maintainability.

Some of the major aspects of small arms are described below

In the late 1970s, the western armies began to arm their soldiers with smaller calibre (internal diameter of the barrel of a gun) rifles as the objective was to injure a soldier who would require two or more men to take him out of battle, which would take three to four men out of the fight. Within next decade most armies moved from 7.62mm guns to 5.56 x 4 mm (NATO ).

But today, when armies are fighting nonstate actors (terrorists/militants/Jihadis), who are trained, motivated and equipped to fight till death and hence continue to fight even after injury with the aim of inflicting maximum causalities on the opponent there is a need to stop this individual before he can do more damage and therefore the forces are moving back to higher calibers such as 7.62mm.

Modern infantry’s battle load is in excess of around 40 kg which includes personal weapons, ammunition, food, water, communication devices, batteries etc. All armies prefer lighter guns which are easy to carry along with battle load and are effortless to handle. INSAS which weighs around 4.2 kgs (without magazine) is around 500 gm heavier than AK-47. Modern assault rifle like Tavor -21, Tavor-7 and SCAR -H weighs slightly over three kg. The lighter weapon gives less recoil and is easy to fire in burst mode.

AK-47, most used firearm in the world, with its all qualities is not considered very accurate in engaging targets at longer range. Today, forces look for a gun which is capable of the high rate of fire but it should also be accurate enough to engage targets at 300 to 400 metres range. This is where modern small arms come into picture. Most of the latest rifles can effectively and accurately engage targets at this range. Similarly, for LMG, the range with accuracy is around 800 metres.

A gun cannot be a fragile thing. It has to be robust enough to survive shocks and hits that it may face during the conduct of exercises in peacetime and during conflicts. A gun has to be tough but on other hand it should also be light and compact.

To fire heavy calibre bullets, guns need longer barrel, but this restricts effective target acquisition in close quarters. This is where carbine comes handy as they give firepower through smaller barrel. Bullpup design merges the two kinds of guns. It retains the barrel length of an AR by placing the trigger in front of the action and magazine. This reduces the effective length of the gun. Hence, it merges the accuracy and firepower of AR with the handiness of carbines.

Modern small arms are expected to be modular, easy to maintain and should allow add-on of accessories. A modern soldier is a system in itself. He should be capable of operating in all condition and weather through both day and night. This is achieved through use of various kinds of gadgets.

Some of these equipment are reflex sights – to aim with open eyes; flashlight; laser target designator; rangefinder; telescopic sights and different kinds of infrared/night vision devices. To integrate these accessories, modern weapons must come with Picatinny rail.

The modern small arms are evolving into a standardized system and are being developed keeping in mind the need for add-on accessories. In comparison to the previous generation of weapons, these new entrant gives soldiers reprieve from tackling many of the problems associated with managing weapons. This brings vital relief to a soldier who is pre-occupied with the larger operational issues and does not want to think about things as fundamental as the functioning of his rifle/carbine.