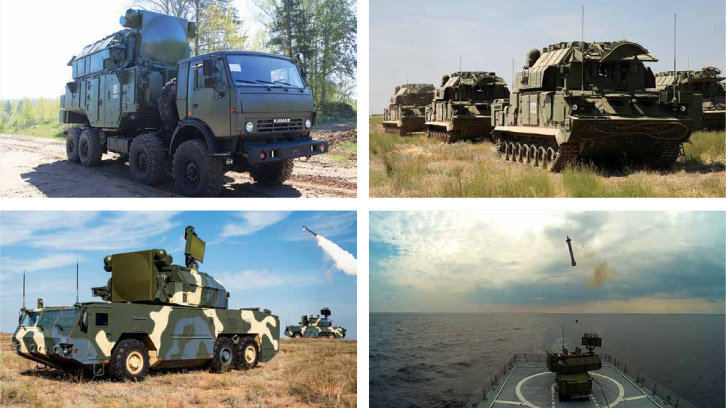 Russia’s military authorities had always recognized unification of land- and sea-based weapons as one of the most important challenges for building Armed Forces’ effective structure. Back in the end of the XIX-th Century there was a pretty successful attempt made to create a 10-inch long-range gun unified for ships and land fortresses. In the second half of the XX-th Century missiles and rockets became the main weapon of the Army and Navy, but even then there was an intention to have them unified. Especially in areas where weapons enabled completion of similar tasks like in air defense. In fact, the first Soviet sea-based anti-aircraft missile systems were based on land-based air defense systems. These were Volkhov-M M-2 AD system based on C-75 AD system of AD land forces and Volna M-1 AD system – a sea-based version of C-125. But the Navy authorities were not quite satisfied with “marinization” of land AD systems. Next-generation systems – Osa-M ADS – were initially designed and manufactured to meet requirements of the Navy, but with a task to make them unified with land-based Osa AD system. Sadly, the level of military and technical development didn’t make it possible to complete this task at that time. Special features of sea-based AD systems were supposed to ensure firing on the move – a destroyer or cruiser must not stop to counter an air attack. Anyway, such features require stabilization of all radar antennas in three dimensions and powerful computer systems, comparing to at-halt firing. This would increase the system weight. Heavy weight of an AD system is not a problem for heavy and medium displacement ships – their weapons’ weight of hundreds and thousands tons would be added only couple tens of tons. Such increase in weight would turn out to be critical for land AD systems – Osa AD system had only target acquisition radar antennas stabilized, missiles had to be guided at halt. As a result, only 9M33 surface-to-air missile was unified. The same happened during development of next-generation short-range AD system – land-based Tor and sea-based Kynzhal. Once again, using the same missile the systems were significantly different in arrangement and performance. To understand the difference in requirements to land and sea AD systems these systems need to be compared. The Tor AD system had 1 target channel, and the Kynzhal AD system, accepted for service in the same year, had already 4 channels. On the one hand, a combat ship is a much more attractive target comparing to a tank or a multiple rocket launcher and must have more features to counter mass air attacks, on the other hand, cruisers and destroyers of the Navy could carry heavier systems, comparing to those installed on land-based chassis: whereas total weight of the Tor system was 32 tons, just the Kynzhal launcher took 42 tons of its carrier’s displacement. The truth is that in the USSR Navy effective AD systems were installed on heavy and medium displacement ships only because of the Kynzhal systems heavy weight, and small-size forces of the Navy had to use just artillery AD units or sea editions of MANPADS.

However, within 30-45 years from the date of put of the first Osa and Tor systems into service, the situation changed greatly. On the one side, amount of combat ships in the Navy became less, but their capabilities increased significantly. One cannot compare patrol ships of the 159A project and their torpedo-artillery weapons to small missilelaunching ships of the 21631 project, carrying the Caliber systems, – that much is the difference of their attack capabilities, after all, the latter have two times less displacement. Therefore, the value of each specific combat unit of the Navy has increased much. And leaving even small ships undefended against air attacks wouldn’t be wise. On the other side, up-to-date industry is quite capable of providing the Navy with space-effective AD systems suitable not only for cruisers and destroyers but for low displacement ships as well.

Present-day Tor-family systems, starting with Tor-M2U, have 4 target channels. New surface-to-air missiles 9M338K were adopted. The diameter of them is 35% smaller than the diameter of SAMs 9M330-2 used for Kynzhal AD system. That enables to increase ammunition load twice. Finally, development of radio-electronic components makes short-range AD systems capable to fire on the move. Thus, in 2015 Tor-M2U AD system destroyed airborne targets while moving at the speed of 25 km/h, and in 2016 the system performed successful training firings while moving at the speed of 45 km/h. Let us remind about a necessary requirement to a sea AD system capability to perform firing on the move.

To clear up performance of the Torfamily systems in the Navy there were Tor-M2U firing carried out in 2015 from a shoreline at targets flying over water. The Tors destroyed targets properly that simulated modern air attack means. In September 2016 Tor-M2KM AD system carried out successful firing from the Admiral Grigorovych frigate, moving in the open sea at the speed of 8 knots, at targets of different type, including targets simulated an anti-ship missile. Applicability of the Tor-family system by the Navy has been proved.

Victor Visner, deputy general director for technical development of the Izhevsk Electromechanical Plant (IEMP) Kupol, points out that “making unified weapons for operation in different conditions – important task. The solution would greatly decrease cost of production and operation due to batch production enlargement, as well as to manipulate production facilities more effectively. Today we are already capable to perform major efforts in making sea and land short-range AD systems unified. Still, there will be some differences because of different operating conditions, but great options provided in the Tor system makes it possible to manufacture nearly all the equipment unified, i.e. the differences would only be in matching the AD system with the ship and computer systems algorithms”.

So, it is fair to say that domestic industry today is a footstep away to provide the Navy with effective, space saving and fairly lowcost air defense system. Soviet admirals’ dream is close to become true.