No other country in any part of the world has evinced any interest in the same so far for numerous reasons including major shortcomings like limited armour protection, accuracy and subsequent maintenance and sustenance. 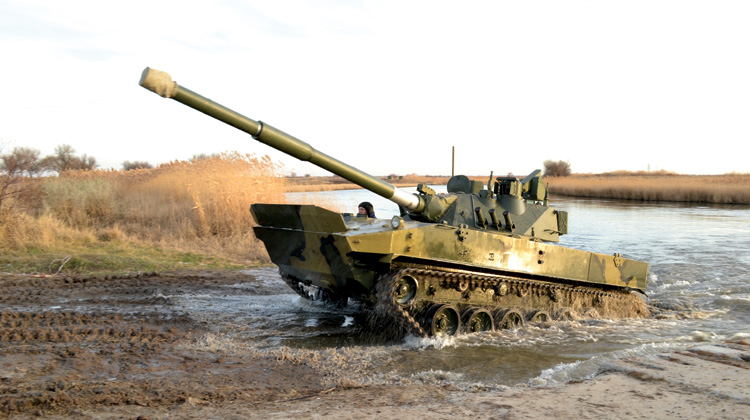 An article in the Eurasian Times of November 02, 2020, Why India Desperately Needs the Russian Aquatic Tank Killer  The SPRUT against China clearly appears to be an implant by people/organisations with vested interests of keeping India away from its goal of self reliant in indigenous defence capability and production and in achieving the larger goal of Atma Nirbhar Bharat given as a clarion call by the Prime Minister.

On July 28, 2020, in the same columns, it was the media reports mentioning of Indian Armys decision to pick up 2S25M SPRUT-SDM1 Tank Destroyer (light tank) under the emergency purchases clause, as the same is already in service with the Russians Army for sometime. However, it failed to mention that the misquoted light tank is limited in numbers and only airborne division is equipped with the same. Currently Russia is the only country to operate this fighting vehicle with merely 24 numbers in service. No other country in any part of the world has evinced any interest in the same so far for numerous reasons including major shortcomings like limited armour protection, accuracy and subsequent maintenance and sustenance.

The justification in the above mentioned article in the Eurasian Times for Indian Armys desperate need for SPRUT-SDM1 is the deployment by the Chinese PLA of the VT-4 main battle tank. Also known as the MBT 3000 previously, VT 4 is a third generation Main Battle Tank. It is also the latest tank model from T-90 II A series and compares a shade better than T-99. The article does not bring out, how SPRUT will be able to fight the mechanised manoeuvre battle in the cold deserts implying an amateur attempt to justify the unjustifiable.

Even a remote suggestion to have SPRUT-SDM1, a vintage technology BMP Chassis based system with unstable 125 mm turret against the VT-4 can only be the brain wave of the most non military mind with no knowledge of mechanised warfare. No sane military thinker would ever even consider the same because firstly, an Infantry Combat Vehicle chassis can never be a stable platform for 125 mm Gun with a trunnion pull of 102 to 105 tons which would hugely affect the efficacy to fire accurately even when static from an 18 ton platform. And secondly, to think that Sprut-SDM1 would be the panacea for tank versus tank operation against VT-4 (T-99) main battle tank on the Line of Actual Control, which does not even have STANAG 2 protection, is even a bigger folly.

The requirement of mechanised forces in Ladakh is not a new discovery by Indian Army. The same were inducted for the first time for the Battle of Zoji-La in 1948. Western Ladakh, particularly the areas South of Pangong Tso (lake) is an ideal terrain for limited mechanised operations. Since the Battle of Rezang-la, providentially fought during the same period (18 Nov 1962), some mechanised elements always remained in Ladakh, though fewer in numbers. In 1988 a Mechanised Infantry battalion based on BMP II configuration was inducted followed by a Regiment of T-72 tanks. The numbers only increased over the years with the raising of an Armoured Brigade in 2016. Post the build up by the PLA, a Regiment of T-90 tanks with 125 mm main gun and capable of firing INVAR Anti Tank Guided missile along with one more battalion of Mechanised Infantry have been inducted. These, when moved in to the operational area against the VT-4 of Chinese, halted the further advance by the PLA immediately. The deployment of BMP II in increased numbers in Daulat Beg Oldie-Gapshan-Chongtash (Sub-Sector North) Area and on the Southern Banks of Pangong Tso (Lake) further enhances the anti tank defence. The BMP has the Konkurs missile which can engage and destroy any tank up to 4000 meters and the Combat Vehicle is far more versatile in its present configuration. The induction of SPRUT-SDM1 does not in any way enhances the defensive capability but may create a false sense of protection and also logistic nightmare.

Induction of only 24 pieces of SPRUT SDM1 in the Russian Army ever, since its inception and first of production in 1983, speaks for itself of the confidence in the equipment of the manufacturing country. Is this an endeavour to offload an old and failed product to a friend in need and further saddle with complex issues ranging from delivery schedule, as the equipment is not even in regular production to quality control, life cycle support and future upgrades as well.

The crying need of the hour in Ladakh is rather a Light Tank with a reckoned fire power, adequate armour protection and good power to weight ratio to ensure agility and survivability

The crying need of the hour in Ladakh is rather a Light Tank with a reckoned fire power, adequate armour protection and good power to weight ratio to ensure agility and survivability, the two non negotiable characteristics of any Armour Fighting Vehicle (AFV). Further, because of the difficulties in induction through surface means, it would facilitate air transportation with the existing transport fleet, i.e. C-17 Globemaster III and IL 76, available with the Indian Air Force to ensure year round induction despite the construction of tunnels and alternate roads. Hence, what Indian Army should be looking at is not a SPRUT SDM1 but a 30-35 Ton light tank with 105 mm Gun, 1000 HP engine and STANAG IV level protection. The Indian Army now already has an indigenously designed and developed world class tank, ARJUN, with another upgrade, ARJUN Mark 1A also fully developed. As the indigenous capacity and capability to Design and Develop an Armoured Fighting Vehicles exists and is proven with the roll out of two successful models already in service, it is time that Ministry of Defence in India and Indian Army think about having its own Light Tank. This tank with variants can then be the main stay of Mechanised operations in the cold deserts of Ladakh or the plains of Sikkim Plateau. This would also fulfil the age-old requirement of the Reconnaissance Regiments.