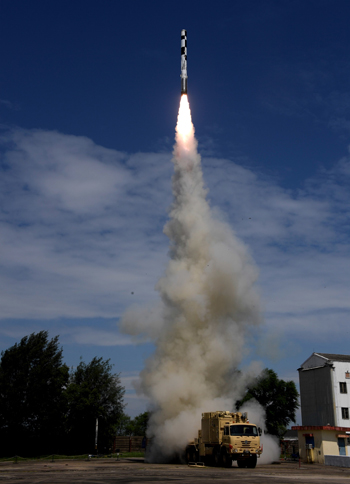 BrahMos missile is one of its own kind supersonic missile having a maximum speed of 2.8 Mach (around 3,450 kmph or 2,148 mph) which is difficult to intercept by surface-to-air missiles including because of its immense ability to evade various radars. Being a joint venture (JV) between Indias Defence Research and Development Organisation (DRDO) and Russias NPO Mashinostroyeniya, its name is derived from the combination of Indias Brahmaputra River and Russias Moskva River.

BrahMos is a two-stage missile, with a solid propellant booster engine that kicks in the first stage and brings the missile to supersonic speed before separating. Following this, the liquid ramjet comes into action, and takes the missile to the Mach 2.8 cruise phase. It operates on a fire and forget principle without the need to be constantly monitored during its path to hit the target. The missiles cruising altitude can be up to 15 km, and the lowest it can fly is 10 metres above the surface. The nine metre long missile is capable of carrying a conventional warhead (non-nuclear) weighing 200-300 kg.

Since February 12, 1998, when BrahMos Aerospace was established as a JV through an Inter-Governmental Agreement, BrahMos has made giant leaps. India has already deployed a sizeable number of the original BrahMos missiles and other key assets in several strategic locations along the Line of Actual Control (LAC) with China in Ladakh and Arunachal Pradesh to deter the enemy. The IAF is also integrating BrahMos supersonic cruise missile with over 40 Sukhoi fighter jets for bolstering its overall combat capability. In January this year, IAF had commissioned the 222 Tiger Sharks squadron in Thanjavur, home to the first lot of Su-30 MKIs equipped with the BrahMos.

With China surrounding India with what is termed as the string of pearls; arming and drawing Indias immediate neighbours into its strategic sphere to wean them away from India, the need to do the same to China has been felt for a long time. Export of BrahMos to countries facing common threat by China especially in immediate neighbourhood of China is an important step in this. Right from 2015 when Prime Minister Narendra Modi announced the Act East Policy (AEP) in May 2015, there has been speculation of India supplying BrahMos missiles to Vietnam. However, this has not materialised to-date. Perhaps the export of BrahMos requires concurrence of both the JV partners and Russia may not have wanted to antagonise China?

BrahMos from a Sukhoi-30MKI fighter

However, on November 12, Roman Babushkin, Deputy Chief of Mission at the Embassy of Russia in New Delhi told media in an online briefing that India and Russia are planning to export the BrahMos supersonic cruise missile to the Philippines and several other countries. BrahMos missile can be launched from submarines, ships, aircraft or from land platforms. According to media, India is likely to ink an agreement with the Philippines early next year to supply a batch of BrahMos missiles. A number of countries including in the Gulf region have showed interests in procuring the BrahMos missiles. All this is good news because it is high time the BrahMos went global.

The export version of BrahMos will possibly be the original BrahMos missile with range of 290 km (range of new version is 400 km) and speed of 2.8 Mach carrying a conventional warhead (non-nuclear) weighing 200-300 kg, which is permissible under the Missile Technology Control Regime (MTCR). India joined the MTCR on June 27, 2016, membership of which has grown to 35 nations already. The MTCR was established in order to curb the spread of unmanned delivery systems for nuclear weapons, specifically delivery systems that could carry a payload of 500 kg for a distance of 300 km. All MTCR members must adhere to the MTCR guidelines.

The 400-km range BrahMos was successfully tested in September 2020 and as per DRDO sources, talks are on with the three Services to extend the range of the missiles within a scheduled time period. Significantly, one BrahMos missile tested in September featured indigenous Booster and Airframe Section along with many other Made in India sub-systems, which was successfully flight tested from designated range ITR, Balasore in Odisha. 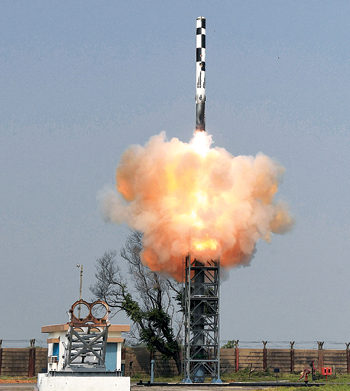 In recent weeks, India has conducted a series of tests on the BrahMos missiles that began on November 24 with multiple operational firings conducted by the three services. The Army conducted live firing of BrahMos at the Trak island in the Andaman and Nicobar archipelago, while naval warships tested the anti-ship variant on the high seas and the IAF too conducted live firing of BrahMos in the Indian Ocean Region. Media quoting a source of the Ministry of Defence (MoD) said that requisite advance warnings to aircraft and ships in the Arabian Sea and Bay of Bengal had been issued.

BrahMos has emerged as a very important strike weapon for the Armed Forces over the years, with contracts worth over 36,000 crore already inked till now. The Army presently has three BrahMos regiments, with another two on the way. Ten frontline warships are also equipped with the BrahMos vertical launch systems, while another two are currently being fitted with them. As mentioned earlier, 40 Sukhoi fighter jets are being fitted with BrahMos missiles.

India and Russia are already working on a hypersonic version of the BrahMos missile that can fly at over 5 Mach speed. According to sources an 800-km range BrahMos with speed over 5 Mach is likely to be tested in 2021. The team is also working on a 1,500-km range BrahMos missile which initially will be a land-based version but once the system is proven, will only need few modifications to fire it from the air and water.

In context of exporting BrahMos missiles, Russia needs to take Indias strategic interests into consideration. Export of BrahMos to countries like Vietnam should be given priority.