FRCV - Aimed to Shock and Awe

The Indian Army has a mixed inventory of tanks to include T-72M1 (Ajeya) acquired in 1981, T-90 (Bhishma) acquired in 2001 and the home grown Arjun tank acquired in 2004. Out of these T-72 is the oldest which started service in India with 7 Cavalry Regiment in 1981. There are about 1700 T-72 tanks in service with the Indian Army. The initial lot of T-72 was imported from Russia and the remaining were manufactured by Heavy Vehicle Factory (HVF) Avadi, under license from Russia. Their upgradation started around 2004 but they are still about 40 years old and thus the process of their replacement has been initiated by the issue of an RFI in the first week of June 2021. Subsequently the FRCV will replace other tanks also. This RFI supersedes a previously issued RFI during 2017.

As the process of defence acquisition in Indian is very slow, the first tank may just role out of the factory in about 10-15 years thus the vintage of T-72 will be around 50 plus years although the time frame for induction is 2025-27 which is rather ambitious. For example the planning for the Future Infantry Combat Vehicle (FICV) started in 2005 to replace the Russian origin BMP-II (Sarath) series which were inducted in 1980. It was approved in 2008 but after some twists and turns, the Government during December 2019 announced in the Parliament about the closure of the project. The process for FICV has yet to be reinitiated.

T-72 is the oldest tank in service with the Indian Army. There are about 1700 T-72 tanks in service that will be replaced with the FRCV.

The RFI states that the Indian Army requires state-of-the-art Main Battle Tank namely Future Ready Combat Vehicle (FRCV) to replace the existing tank fleet. The FRCV would be required to operate across developed /semi-desert/desert terrain and in high altitude areas across the entire spectrum of conflict. It will be a technologically enabled futuristic tank to cater for current and future operational requirements beyond 2050. The FRCV being the fore runner will pave the way subsequently for a family of supporting platforms, based on a modular approach and base platform standardisation. The last line implies that the platforms design should be such that other variants like trawl version for mine clearance, a self propelled artillery gun version for fire support and a bridge layer version could be based on the basic platform. Other aspects of the FRCV are as follows:-

Mobility. It should be of medium weight class (45-50 Tons), have High Power (HP) to Weight Ratio and Low Nominal Ground Pressure (NGP) with a high operating range. Arjun MBT has a bigger track-print hence its NGP is only 0.84 kg/cm2 and HP to Weight Ratio is 23.9 which compares well with other MBTs of the world . T-90 has a HP to weight ratio of 21.5 and NGP is 0.94. The FRCV should be able to operate in all types of terrain and weather as available in Indias security environment. It should have fording capability, should be air and rail transportable with the in-service aircraft and rail infrastructure. It should also be able to move over existing bridges.

Firepower. The main gun should be capable of firing a variety of ammunition, including Anti-tank Guided Missiles (ATGMs). The secondary weapon system(s) should be capable of handling other threats from ground and air. The gun and ammunition combined should have a high first round hit probability and high lethality under dynamic battle conditions. The fire control system should be state-of-the-art, capable of providing rapid ballistic solution on a moving tank to enable first shot kill capability. It should be able to automatically track multiple targets with the concept of hunter killer in a fully integrated system with data fusion, which could operate effectively by day as well as night. The commanders sight should have a 360 panoramic view. The Integrated Fire Detection and Suppression System (IFDSS) should incorporate technologies to enable high survivability, including passive, active, reactive and ballistic protection and stealth/signature management for countering the multiple threat scenarios. 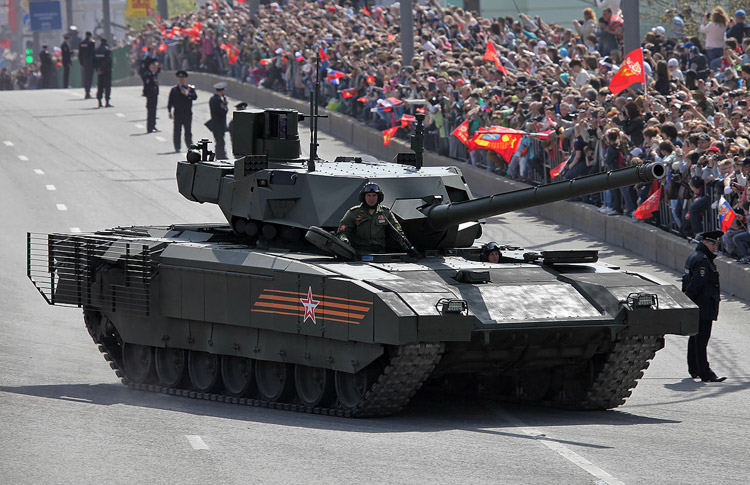 Comparison of fire power with the latest T-14 Armata Tank from Russia. T-14 is chosen here as India has a legacy of using Russian tanks like T-55, T-72 and T-90.The main armament of the T-14 Armata is the 2A82-1M 125 mm smoothbore cannon; its muzzle velocity is understood to be greater than that of the 120 mm gun of Rheinmetall mounted on German Leopard II and its rate of fire is 10 12 rounds per minute. The 2A82-1M 125 mm cannon can fire a wide range of ammunition, including armour-piercing fin-stabilized discarding sabot (APFSDS) projectiles, guided missiles, air-burst HE-Frag (fragment) shells and other types of rounds. The gun is also capable of firing ATGMs like the 9M119M1 Invar-M which has an effective range of 5 km and can engage low-flying air targets such as helicopters. The secondary armament consists of a 12.7×108mm Kord (GRAU index 6P49) machine gun with 300 rounds and a 7.62×54mm R Pecheneg PKP (GRAU Index: 6P41) or a PKTM (6P7?) machine gun with 1,000 rounds. All guns are remotely controlled.

The FRCV should be able to integrate with in-service secure Software Defined Radio (SDR); in-service Navigation System and in-service BMS (Battlefield Management System) which enables the integrated IFDSS platform to operate in a network centric environment.

The FRCV should have the capability to operate in a CBRN and EW environment.

The FRCV should be ergonomically designed for all weather conditions and 24 x 7 operations without crew relief for 72 to 96 hours. It should be of Modular design and have Built-in Test Equipment (BITE) to minimise equipment down time. Also required is the maintenance and training package as well as performance based logistics and engineering support packages.

The Indian Army has plans to acquire 1,700 FRCVs.

ToT is a mandatory requirement.

The FRCV is proposed to be developed as per Chapter III, Make-I procedure under provisions of DPP-2016. The FRCV development will be Service HQ driven with enabled state-of-theart and futuristic technology. MakeI procedure implies that 90% of the development cost will be funded by the Government and there is a provision for mobilising advance.

The Indian Army is seeking development of futuristic combat vehicle for induction by 2025-27.

RFI issued for the FRCV includes these companies

OEMs in the Competition. It is understood that the RFI has been sent to the following companies:

Time frame to respond to the RFI

The companies are expected to respond by mid-September 2021.

The issue of the RFI for FRCV under Make  I procedure under which 90% of the development cost will be funded by the Government is a very positive step in the development of indigenous defence platforms and should yield very good results.