On November 2, 2022, India successfully tested its new interceptor missile for Phase-II of its indigenous BMD system, which is capable of intercepting incoming long-range nuclear missiles as well as slow-moving aircraft

Indias BMD programme to counter ballistic missile threat from China and Pakistan was launched in the aftermath of the Kargil Conflict with Pakistan in 1999, testing for which commenced in 2000. It is a double-tiered system consisting of two land and sea-based interceptor missiles:

The two-tiered shield is expected to intercept incoming missile launched from 5,000 km away.

Development of Phase-I of the two-tier BMD, which is designed to track and destroy nuclear missiles both inside (Endo) and outside (Exo) the earth's atmosphere at altitudes from 15-25 km to 80-100 km for a higher kill probability involved around 40 public and private companies for developing the systems. The PAD was tested in November 2006 and it was then reported that India having successfully developed a BMD system, became the fourth country in the world after the US, Russia and Israel. The system has undergone several tests since then but is yet to be officially commissioned.

According to sources, the government has not sanctioned full-scale operational deployment of PAD at any vital location. The reason for this, according to unnamed sources, is attributed to the high costs involved. Another speculation is that it may provoke Pakistan to go in for a larger nuclear arsenal and countermeasures to defeat our BMD system; but Pakistan already has a bigger nuclear arsenal than India and China is expanding its nuclear missile deployments full throttle.

The government has not sanctioned full-scale operational deployment of Prithvi Air Defence (PAD) at any vital location. The reason for this is attributed to the high costs involved 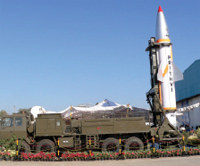 The DRDO continues to develop requisite technologies for a full-fledged BMD system. As per the original plan, Phase-I of the BMD system, with interceptors flying at 4.5 Mach supersonic speeds to intercept enemy missiles, was meant to tackle hostile missiles with a 2,000-km strike range. The Phase-II, in turn, is supposed to take on the 5,000-km range class of missiles. Initial testing for the BMD Phase II (AAD) had begun in 2007.

On November 2, 2022, India successfully tested its new interceptor missile for Phase-II of its indigenous BMD system, which is capable of intercepting incoming long-range nuclear missiles as well as slow-moving aircraft. The new interceptor missile (AD-1) was tested against an electronic target from the A.P.J. Abdul Kalam Island off the Odisha coast with elements of the BMD system placed at different geographical locations.

Defence Minister Rajnath Singh has said that AD-1 is a unique type of interceptor with advanced technologies available with only a very few nations in the world, while expressing confidence that it will further strengthen the countrys BMD capability and take it to the next level. Concurrently, DRDO Chairman Samir V. Kamat, said the AD-1 interceptor will provide great operational flexibility to the users and has the capability to engage many different types of targets.

Propelled by a two-stage solid motor, the AD-1 is equipped with indigenously-developed advanced control systems, navigation and guidance algorithms to precisely guide the vehicle to the target. A statement by the Ministry of Defence (MoD) read, The AD-1 is a long-range interceptor missile designed for both low exo-atmospheric and endo-atmospheric interception of long-range ballistic missiles as well as aircraft (like AEW&C or airborne warning and control systems).

As per media reports that emerged in January 2020, the first phase of BMD programme was complete but is awaiting government approval. The report also said that missile shield around the national capital itself will take three to four years time for installation after the government approval. There is no indication of the government according this approval in the near future and even if so, what areas will it cover other than the national capital?

India has begun inducting the Russian S-400 Triumf surface-to-air missile systems that can detect, track and destroy incoming strategic bombers, jets, spy planes, drones and even some intermediate-range ballistic missiles. However, what parts of India these systems would cover or leave uncovered remains ambiguous.

There is no doubt that the US, Russia, India, France, Israel, Italy, UK, China and Iran have all developed BMD systems, but in our case, deployment of even PAD to provide effective cover to important locations appears many years away. The implications for this can hardly be ignored given the mounting threats to our national security. Strategic developments in the Indo-Pacific with the US hell bent on engaging China in combat through another country (like using Ukraine against Russia) makes it even more important.

It is pretty evident that presently we do not have requisite BMD cover and any amount of rhetoric cannot cover this up. A holistic analysis is needed encompassing the following:

The mounting threat in the immediate and part mid-term need to be weighed against the pace of indigenisation and the time taken for actual fielding of these systems in required numbers. Make in India is good and percentage of indigenous components do get mentioned but within that percentage what are the critical items is what is important. The bottom line is that in order to get an effective BMD shield, we may have to continue with a mix of imports, indigenous and Make in India; which maybe the only way to address this criticality.