On June 28, 2021, India successfully carried out test-firing of the Agni Prime missile off the coast of Odisha at 10.55 am. It is a medium range ballistic missile developed by the Defence Research and Development Organisation (DRDO) as successor to Agni-I and Agni-II held by the Strategic Forces Command with significant upgrades in the form of composite motor casing, maneuverable re-entry vehicle (MaRV) along with improved propellants, navigation and guidance systems. It is the sixth missile in the Agni series.

Agni Prime is the first of the new class of Agni missile to be launched by DRDO. The ballistic missile weighs 50 per cent less than Agni-3 and has new guidance and a new generation of propulsion. Since the missile is cannisterised, it can be launched from rail and road and stored for a longer period and transported all across the country as per operational requirements. After the successful test firing, the DRDO said that the cannisterised" Agni-Prime, which is made up of composite material, is capable of carrying nuclear weapons and has a range between 1,000 and 2,000 km. The surface to surface missile can carry a payload of around 1,000 kg or a nuclear warhead. The double stage missile is lighter and much sleeker than its predecessor Agni-1.

Agni Prime is the first of the new class of Agni missile to be launched by DRDO. The ballistic missile weighs 50 per cent less than Agni-3 and has new guidance and a new generation of propulsion.

Defence Minister Rajnath Singh tweeted on June 28 saying, Congratulations to DRDO for the maiden successful flight test of Agni P, advanced variant of Agni class of missiles. I compliment the efforts of the team behind this mission. Many advanced technologies including Composites, Propulsion Systems, innovative Guidance and Control mechanisms and state-of-the-art navigation systems have been introduced. The Agni P would further strengthen Indias Credible Deterrence capability. 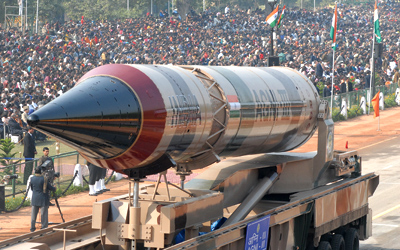 The Agni-P is being viewed as a counterforce weapon because of Indias no first use (NFU) policy. It is also being seen as part of the work in progress towards an advance anti-ship ballistic missile (ASBM) development for enhancing future sea denial capability against the Chinese Navy. Chinese media reacted to Indias Agni Prime missile test by saying Agni-P will need more testing to prove its anti-ship role like the DF-21D or DF-26B which have already proven their capabilities in military exercise during 2020 by destroying targets in South China Sea (SCS) although Agni-P does increases the accuracy, quick reaction time and precision strike capability of Indian Armed Forces against tactical targets in China and Pakistan.

With a range of 1,000-2,000 kilometers, the Agni Prime missile is capable of covering vital targets all across Pakistan. The missile was made using the same technology used in the longer-range Agni 4 and Agni 5 missiles albeit it is the lightest and smallest of the Agni series because of technological advancements. The cannisterised system means that the movement and launch options increase for the Strategic Forces Command. Most significantly, the missile can even be manoeuvred at one point if need be; a feature that usually is not available in a ballistic missile, making it more difficult to intercept.

Agni-P does increases the accuracy, quick reaction time and precision strike capability of Indian Armed Forces against tactical targets in China and Pakistan

In terms of number of vessels, China is already the largest navy in the world having surpassed the US Navy. Chinese strategists have been talking of deploying at least two Carrier Battle Groups (CBGs) each in the SCS and the Indian Ocean plus holding one or two CBGs as reserves to protect Chinas maritime interests. To support the CBGs to be deployed in the Indian Ocean, China is already focused on developing oversea logistics bases in Gwadar (Pakistan), Hambantota (Sri Lanka) and Kyaukpu in Myanmar.

China's DF-21D missiles to attack aircraft carriers up to 1,800 km distance with conventional warheads is to offset American naval capacity to dominate the Indo-Pacific region and exercise sea control. China has also inducted the DF-26B nuclear capable missile which with its 5,000 km range can strike the US military base of Guam in the Pacific. The Agni Prime too can effectively strike Chinese CBGs in waters of the Indian Ocean. The Agni Prime is part of a much larger arsenal (submarines included) that India wants to deploy in the Indo-Pacific region to effectively deter China in the maritime domain.

India has already tested the 3,500 km range K4 submarine launched ballistic missile (SLBM) which can be launched from Arihant class nuclear submarines of which INS Arighat is a part. This enables a new dimension to India's second-strike capability; ability to carry out a retaliatory nuclear attack after absorbing an initial attack by an atomic weapon. The 3,500 km reach of K4 missiles, which can cover the entire Pakistan and the industrial heartland of China, helps in providing assured deterrence in the region, which includes the 10-nation Association of South-East Asian Nations (ASEAN) and other territories in the Western Pacific.