Austins stop in India is a continuation to the Biden-Harris administration's outreach to revitalise ties with partners and allies. 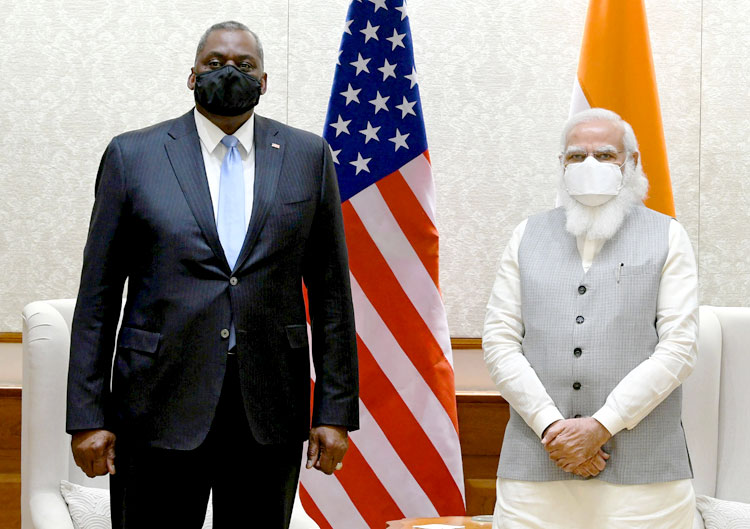 The United States of Americas Secretary of Defence Lloyd J. Austin III with India's Prime Minister Narendra Modi on the first day of the formers visit to India

The two sides reaffirmed their commitment to promote a free and open regional order and exchanged perspectives on shared challenges confronting the region and committed to further strengthen their broad ranging and robust defence cooperation.

Thrilled to be here in India. The breadth of cooperation between our two nations reflects the significance of our major defense partnership, as we work together to address the most pressing challenges facing the Indo-Pacific region. pic.twitter.com/0wA88ERrDn

On the first day of his visit to India, Secretary Austin met with Prime Minister Modi during a stop in New Delhi as well as the National Security Advisor Doval.

Austin commended the Indian leaders on their growing roles in the Indo-Pacific region and the growing engagement they have with like-minded partners across the region to promote shared goals.

The purpose of this stop in India is consistent with the themes of Austins overall trip, which are focused on building United States (U.S.) partnerships across the region and operationalising the defence partnership the U.S. has with India, a senior U.S. official said.

Great meeting with National Security Advisor Doval last night. The breadth of collaboration between our two nations reflects the significance of our Major Defense Partnership as we work together to address the most pressing challenges facing the Indo-Pacific region. pic.twitter.com/DoMZiJDiF1

The defence partnership between the two countries has witnessed significant growth over the years. In 2008, there was no defence trade between the United States of America (USA) and India. However, last year, India bought $20 billion in defence capabilities from the U.S., the official statement from the U.S. Department of Defence (DOD) stated.

Austin commended the Indian leaders on their growing roles in the Indo-Pacific region and the growing engagement they have with like-minded partners across the region to promote shared goals.

The partnership is based on a convergence of strategic interests that the U.S. has with India. "We're increasingly looking at how we can build on the U.S.-India partnership with other like-minded partners.Its how we can network and build our partnerships with India and with other partners, whether it's in the Indian Ocean or in the Pacific Ocean, said a U.S. official.

Adding that the multinational actions are key to this, the official said, "The secretary is looking to reinforce the partnership that we have with India and to encourage India's leading role in security across the Indo-Pacific region."

DOD also wants to advance interoperability with Indian forces and look for ways to work together. The convergence of ideas includes freedom of navigation, freedom of commerce and the peaceful resolution of disputes. These converging strategic interests are the basis for cooperation.

Prime Minister Modi welcomed the warm and close relationship between the two countries, which he highlighted is rooted in shared values of democracy, pluralism and commitment to a rules-based order.

Pleasure to meet U.S. @SecDef Lloyd Austin today. Conveyed my best wishes to @POTUS @JoeBiden. India and US are committed to our strategic partnership that is a force for global good. pic.twitter.com/Z1AoGJlzFX

Modi outlined his vision for the strategic partnership between the two countries and emphasised the important role of bilateral defence cooperation in India-U.S. ties.

Prime Minister Modi outlined his vision for the strategic partnership between the two countries and emphasised the important role of bilateral defence cooperation in India-U.S. ties.

Productive meeting today with @DrSJaishankar. Grateful for the opportunity to discuss opportunities to strengthen the U.S.-India strategic partnership & expand our cooperation with other regional partners to uphold peace & prosperity in the Indo-Pacific and Western Indian Ocean. pic.twitter.com/VtSW4fBFes

The Secretary reiterated U.S. Governments continued commitment towards strengthening the bilateral defence relations between the two countries. He expressed U.S.s strong desire to further enhance the strategic partnership for peace, stability and prosperity in the Indo-Pacific region and beyond.

It is a great honour and pleasure to receive U.S. Secretary of Defence in his first official visit abroad and to India. I spoke with Secretary Austin immediately after he assumed charge. We had an excellent conversation during which I invited him to visit India at his earliest convenience. His visit to India despite the COVID-19 global pandemic, shows the abiding commitment of the United States to our bilateral relationship, said Defence Minister Singh.

Had an excellent meeting in New Delhi today with my US counterpart, @SecDef Mr. Lloyd J. Austin on ways to strengthen India-US defence partnership.

He underlined that a comprehensive and fruitful discussion was held with Secretary Austin and his delegation and the nations are keen to work together to realise the full potential of the India-U.S. Comprehensive Global Strategic Partnership.

We also plan to optimize the LEMOA, COMCASA and BECA Agreements and achieve their full potential to contribute to our security and prosperity: RM Shri @rajnathsingh

DOD highlighted that India is open to cooperating with the United States and others. India recently participated in the Malabar exercises with Japan, Australia and the U.S., and they have participated in the Rim of the Pacific exercises. "So whether it's information-sharing on maritime domain awareness in the Indian Ocean region or looking at maritime security or potentially even building partner-capacity across the Indo-Pacific region, the nations are open to network, and build together by pooling in resources and distributing them, said a DOD official.

Defence Minister Singh also spoke about the multilateral exercise and mentioned, We reviewed the wide gamut of bilateral and multilateral exercises and agreed to pursue enhanced cooperation with the US Indo-Pacific Command, Central Command and Africa Command. Acknowledging that we have in place the foundational agreements, LEMOA, COMCASAand BECA, we discussed steps to be taken to realise their full potential for mutual benefit.

Singh further appreciated Secretary Austin for participation of U.S. in Aero India 2021 along with a business delegation.

In October 2020, India and the United States had signed the Basic Exchange and Cooperation Agreement (BECA), which, along with the two agreements signed earlier  the Logistics Exchange Memorandum of Agreement (LEMOA) and the Communications Compatibility and Security Agreement (COMCASA)  completes a troika of foundational pacts for deep military cooperation between the two countries. The LEMOA was the first of the three pacts to be signed in August 2016, while COMCASA was signed in September 2018.

BECA is aimed at assiting India in receiving real-time access to American geospatial intelligence in order to enhance the accuracy of automated systems and weapons like missiles and armed drones. With LEMOA the militaries of the U.S. and India can better replenish from each others bases, and access supplies, spare parts and services from each others land facilities, air bases, and ports, which can then be reimbursed. This is believed to be significantly helpful for India-U.S. Navy-to-Navy cooperation. As for the COMCASA pact, it allows the US to provide India with its encrypted communications equipment and systems.

We both agreed that there are opportunities for collaboration in defence industry. The recent and first Leaders' Summit of India, USA, Japan and Australia has emphasized our resolve to maintain a free, open and inclusive Indo-Pacific.

Defence Minister Singh further appreciated Secretary Austin for participation of U.S. in Aero India 2021 along with a business delegation. I invited U.S. industry to take advantage of Indias liberalised foreign direct investment (FDI) policies in the defence sector. We both agreed that there are opportunities for collaboration in defence industry.

Showcasing its strong commitment to strengthen the military partnership between the two nations, the US Embassy had organised the U.S. India Defence Partnership Seminar during the hybrid Aero India 2021. The seminar witnessed addresses from multiple speakers representing the different industries from both the countries, talking about the current and future of the bilateral defence partnership.

Busy first day @AeroIndiashow! It was an honor to meet @DefenceMinIndia @rajnathsingh and wonderful to see so many U.S. companies offering high quality and innovative technology. #PartnersInDefense #USIndiaBusiness pic.twitter.com/JB8g2R3k2V

— Chargé DAffaires of the United States in India (@USAmbIndia) February 3, 2021

The Defence Minister also mentioned about the recent Leaders Summit of India, USA, Japan and Australia under the Quad framework emphasised our resolve to maintain a free, open and inclusive Indo-Pacific region. We discussed the need for enhanced capacity building to address some of the non-traditional challenges such as oil spills and environment disasters, drug trafficking, Illegal, Unreported, Unregulated (IUU) fishing, etc. India is committed to further consolidate our robust defence partnership with the United States. I look forward to working with you closely to make the India-U.S. relationship one of the defining partnerships of 21st century, he said.

As the Quad works towards a free, open, secure, inclusive and prosperous Indo-Pacific, @POTUS @JoeBiden, PM @ScottMorrisonMP, PM @sugawitter and I write about our shared vision. https://t.co/S4so5NWtC9

We also reaffirmed that closer India-U.S. cooperation in partnership with countries keen to uphold rules-based order, can promote security and prosperity in the Indo-Pacific region and beyond as this is consistent with India's policy of 'SAGAR', highlighted Singh.

The Secretary also stated, Despite todays challenging security environment, the partnership between the United States and India - the worlds two largest democracies...remains resilient and strong and we will seek every opportunity to build upon this major partnership.

India, in particular, is an increasingly important partner amid todays rapidly shifting international dynamics. I reaffirmed our commitment to a comprehensive and forward-looking defense partnership with India as a central pillar of our approach to the region. pic.twitter.com/PuEu0GNHm2

Austins stop in India is a continuation to the Biden-Harris administration's outreach to revitalise ties with partners and allies. United States has constantly highlighted how India for them is a "major defence partner"  a unique designation. India is the third country Austin has visited on his first overseas trip. Before reaching India, he met with Japanese officials March 15-16 and South Korean leaders March 17-18.

We hope to make India-US relationship as one of the defining partnerships of 211t century for bringing peace and prosperity to both the countries and to our region: RM Shri @rajnathsingh

The Obama-Biden Administration had named India a 'Major Defence Partner' that made it easier to share advanced and critical technology to India to strengthen defence ties. Before taking the office, Austin had also stated about his overarching objective for our defence relationship with India adding that he will operationalise India's "Major Defence Partner" status and build upon the existing strong defence cooperation between the two countries to ensure the US and Indian militaries can collaborate to address shared interests.

Secretary Austin also paid his respects at the national memorial to the brave soldiers who, for India, made the ultimate sacrifice.

Today, @SecDef honored and paid his respects to the the brave soldiers who, for India, made the ultimate sacrifice. What a tremendous memorial to remember Indias heroes. @salute2soldier pic.twitter.com/9jcyoiGr4V

Some highlights from U.S. Defence Secretary's visit to India: