This will be the first such acquisition order under the Strategic Partnership model, which will give a big boost to Make in India 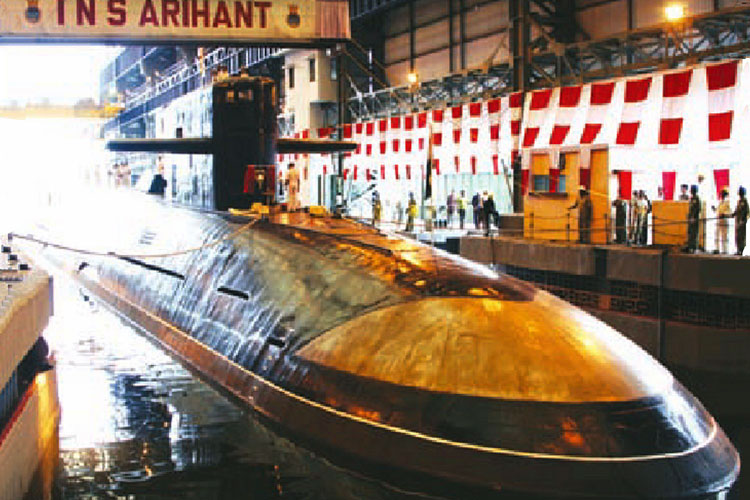 India now has only one indigenous nuclear submarine INS Arihant

Finally, the long overdue decision has been taken for acquisition of six new attack submarines for the Indian Navy. The Ministry of Defence has cleared the decks for last leg of the acquisition process. This decision will be a big relief to the Indian Navy in view of its fast depleting underwater war fighting capabilities. Significantly the Defence Acquisition Council has given green signal for six submarines on a day when the Nuclear powered Submarine INS Chakra, leased for ten years, was seen in Singapore on its way back to Russia, on completion of its tenure. India now has only the remaining indigenous nuclear submarine INS Arihant with INS Arighat, the next nuclear ballistic missile submarine in line, likely to be commissioned soon. Presently India has only 16 conventional and one nuclear powered submarine. Significantly most of the diesel submarines are over two and half decades old.

Presently India has only 16 conventional and one nuclear powered submarine. Significantly most of the diesel submarines are over two and half decades old.

Defence Minister Rajnath Singh, who heads the Defence Acquisition Council, put his final signatures on June 04, on the 43,000 crores project to be implemented in an Indian shipyard, the first where a private sector shipyard has also been asked to compete with public sector shipyard to bag the mega order. The indigenous submarine building program called P-75-I, envisaged more than two decades ago is expected to take another year or two to finally give the go-ahead for laying of the keel of the first submarine, which has been targeted to be completed by 2030. This indigenous Submarine building project of great strategic significance, was urgently required to be given green signal in the backdrop of emerging challenges from China in the Indian Ocean. Since India has joined the four nation Quadrilateral Group to tackle the Chinese threat, India needed to augment its ocean patrolling capabilities. Though much belated, the decision was urgently awaited in Indian strategic circles and also among QUAD partners who consider India as a linchpin of QUAD maritime prowess.

According to Defence Ministry, this project envisages indigenous construction of six conventional submarines equipped with the state-of-the-art Air-Independent Propulsion (AIP) system. The AIP system equipped submarines will, to a great extent, fill the void in Indian nuclear Submarine capabilities. 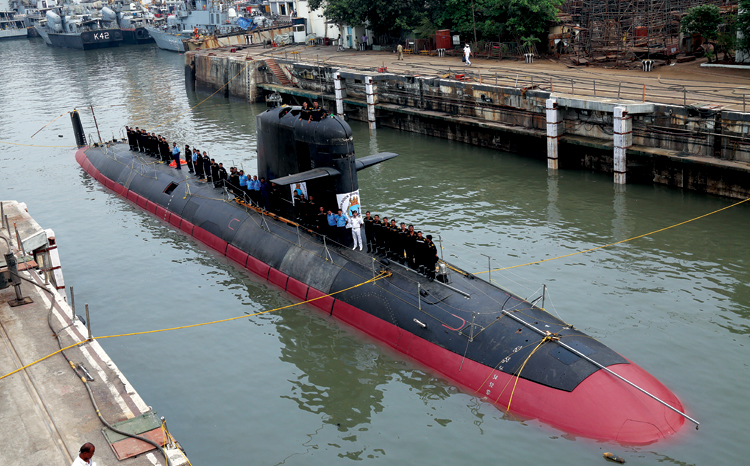 INS Kalvari (S-21), was the first of the six Scorpene class submarines built under Project 75 (Kalvari Class) for the Indian Navy

This will be the first such acquisition order under the Strategic Partnership model, which will give a big boost to Make in India. According to sources, another likely project for fighter aircrafts for Indian Air Force, is also being thought of under the Strategic Partnership model, though the ministry is presently keeping mum over the plan. Under the Strategic Partnership model, the Indian manufacturer has to come forward with an Overseas Equipment Manufacturer, a joint production plan, in which the OEM will transfer the systems and knowhow to manufacture the submarines in the Indian shipyard. In the latest first ever submarine tender, the Public Sector Mazagaon Dock Shipbuilders Limited (MDL) and the Private Sector behemoth Larsen and Toubro has been asked to present proposals in collaboration with one of the five OEMs which are in race. The OEMs are- Rosoboronexport (ROE) of Russia, ThyssenKrupp of Germany, Naval Group of France, Navantia of Spain and Daewoo Shipbuilding & Marine Engineering of South Korea. An empowered committee constituted by the Ministry of Defence had shortlisted above companies last year.

This indigenous Submarine building project of great strategic significance, was urgently required to be given green signal in the backdrop of emerging challenges from China in the Indian Ocean

The program to acquire six more submarines after the present six (Scorpenes which were selected in 2006) was conceived in 2000. The project was approved in 2007 after finalising the Scorpene selection decision. However the MOD started taking serious look only in early 2019 when the government sanctioned the Acceptance of Necessity proposal. The Ministry of Defence described the RFP decision as landmark approval, being the first case processed under the Strategic Partnership model. This would be one of the largest Make in India projects and will serve to facilitate faster and more significant absorption of technology and create a tiered industrial ecosystem for submarine construction in India. The MOD official explained that from a strategic perspective, this will help reduce current dependence on imports and gradually ensure greater self-reliance and dependability of supplies from indigenous sources. An official of MOD said that with the accord of the approval of issue of RFP for six attack submarines the country will be able to achieve its 30 year submarine construction programme, as envisioned by the Ministry of Defence two decades ago. In June 1999, the Cabinet Committee on Security had sanctioned 30 year submarine building plan which included two dozen conventional submarines by 2030. 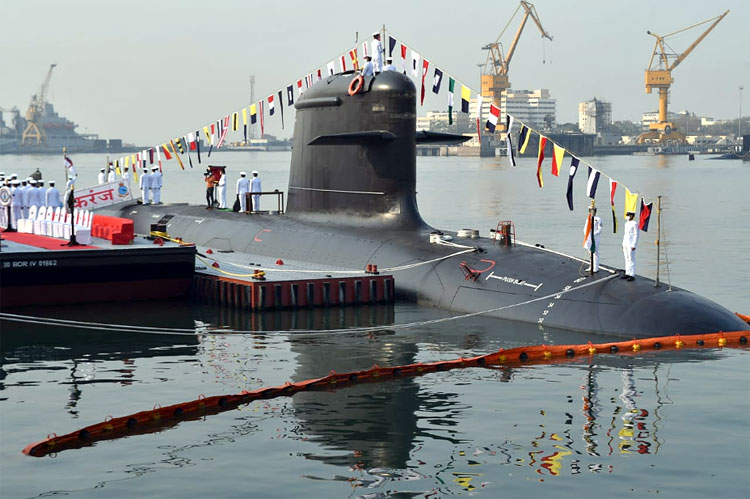 Though much delayed, the latest approval will help in acquiring national competence in submarine construction and for the Indian industry to independently design and construct submarines in India. The availability of new technologies and advanced manufacturing capabilities to the industry will be an important step towards enhancing the nations quest for self-reliance in modern conventional submarine construction and sustainment activities, whilst creating direct and indirect job opportunities in India.

According to ministry sources under the RFP, each Indian strategic partner can choose one OEM and present a joint proposal which will first be technically evaluated and then a commercial bid will be invited.

The approval under Strategic Partnership model will provide for an unique long-term opportunity and planning activity for the industry to invest and support submarine construction. It will also infuse the latest technology and weaponry for submarines in India through strategic tie-up between Indian Industry and leading foreign OEMs. The new submarines will be designed to carry 18 land attack cruise missiles.

Prior to approval of six new submarines under P-75-I, Indian Shipyard MDL, has already started delivering Kalvari class submarines with French collaboration under P-75 project. Under this programme the third submarine INS Karanj was commissioned in March this year. 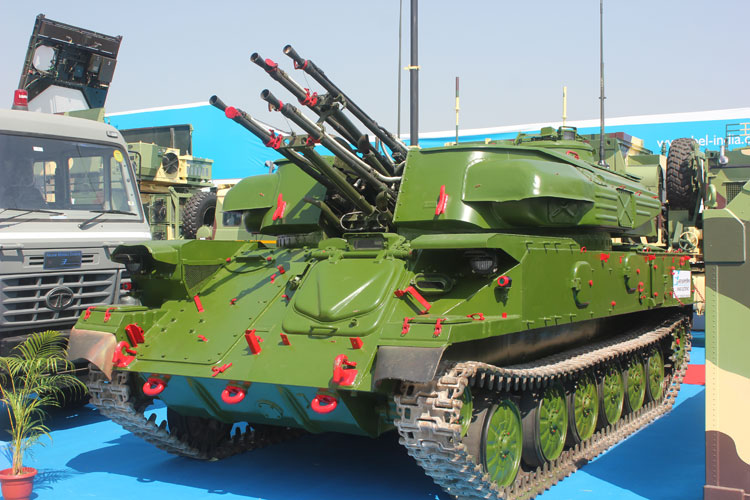 Along with the green signal to issue RFP for six submarines, the Defence Acquisition Council also cleared the long pending demand of the Indian Army for modernisation of its Air Defence Guns at an estimated cost of 6,000 crores under the Buy and Make (Indian) category. The MOD has claimed that this decision will give a big boost to AtmaNirbhar Bharat and Make in India program of the government. According to a ministry official an enthusiastic response from about a dozen Indian companies was received. All of them had expressed willingness and commitment to manufacture this complex Gun system and associated equipment by ensuring technology assimilation in India.

The Defence Acquisition Council also cleared the long pending demand of the Indian Army for modernisation of its Air Defence Guns at an estimated cost of 6,000 crores under the Buy and Make (Indian) category

The MOD spokesperson also stated that in addition to this, to better equip the Armed Forces to meet the operational challenges and facilitate faster induction of required arms and ammunition, the DAC extended the timelines for progressing urgent Capital Acquisitions under the delegated powers to the Armed Forces up to August 31, 2021. This will enable the Armed Forces to complete their emergent and critical acquisitions.