India-US: Partnership of the century 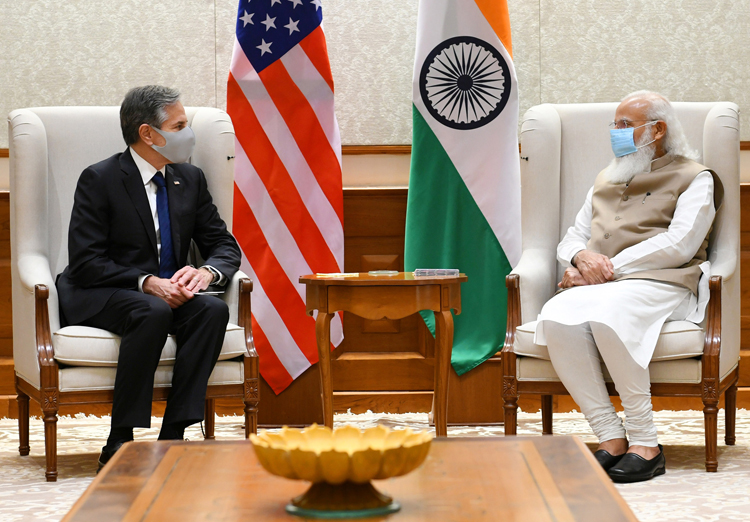 US SECRETARY OF STATE, ANTONY BLINKEN CALLING ON THE PRIME MINISTER NARENDRA MODI, IN NEW DELHI ON JULY 28, 2021.

Considering the deepening strategic relationship between India and US and the realisation in Foggy Bottom that India must be on US side to counter the threatening rise and challenge of China to US predominance in the world, the visit of the seven months old Biden administration's Secretary of State was long overdue. This visit, happening four months after the US Defence Secretary Austins tour to New Delhi, can be termed as the highest level visit from the new US administration, which took over in late January this year, after the Donald Trump regime was overthrown by the American people. Although four months ago US Defence Secretary General Austin had visited India to kick-start new phase of Indo-US strategic partnership under President Bidens administration, Secretary Blinkens visit was much awaited. Though the previous Republican President Donald Trump had given a big push and new meaning to Indo-US strategic relationship in the evolving geo-political scenario, present Democratic President Joe Biden is determined to continue with Trumps agenda and give this relationship a new dimension.

Ever since the end of Cold War, in the early nineties, US recognised Indias strategic significance and despatched its Pacific Command Chief General Kicklighter to New Delhi to launch an entirely new era of Indo-US security and defence cooperation by proposing first ever Indo-US joint maritime exercise nicknamed Malabar. With a brief interregnum in the aftermath of Indias Pokhran nuclear tests, in May 1998, the relationship has seen newer heights with the successive US administrations.

The US Secretary of State Antony Blinken had a special message from the new Biden administration that, US remains committed and ever ready to contribute to rise of Indias stature on global platforms. US strategists have realised that Indias hands must be strengthened to help its emergence on world forums so as to be able to counter Chinas growing ambitions to dominate the world by unilaterally and unethically changing the rules of the game.

In this backdrop, Secretary Blinken discussed Indias role and participation in the newly formed four nation grouping called QUAD or Quadrilateral . Though Blinken has flatly rejected the notion of QUAD as a kind of military alliance, he has emphasised the relevance of QUAD in the changed world power game. The first summit of QUAD was held in March, this year though in virtual format. The kind of seriousness President Biden is attaching to QUAD and Indias participation in this powerful group is evident from the fact that President Biden is hosting the next in-person summit later this year in Washington. It is rare in international relations that two summit level meetings are held in one calendar year. Secretary Blinken had personally handed over the invitation of President Biden to Prime Minister Narendra Modi during his July 28 meeting, to visit Washington DC to attend the QUAD summit and later have a bilateral summit in White House. 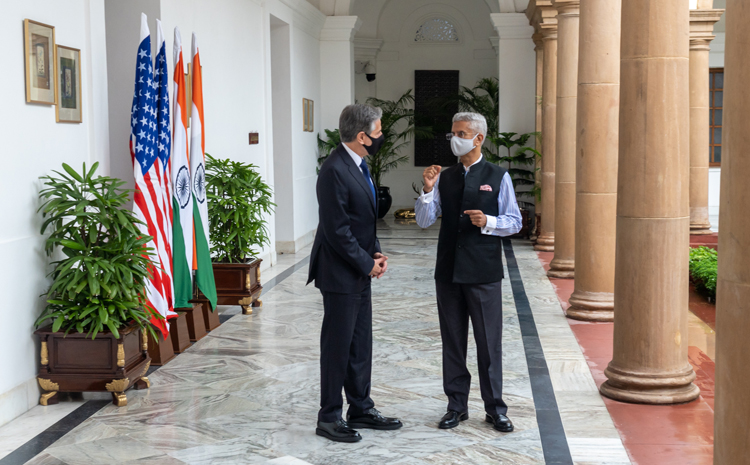 These two highest level interactions promise to catapult India-US strategic partnership to a new level, in the changed geo-political scenario in the post Covid world. There is a realisation in the strategic circles that Chinas wicked behaviour must be countered collectively by like-minded democracies, which have come together on a common platform. As a strongest and oldest democracy the US has a role to play in bringing the largest democracy of India along with democratic Japan and Australia to a common platform to play a collective role to ensure peace, stability and rule of law in various world arena.

Though India US strategic partnership has a special relevance for India, the increasing depth and warmth in bilateral relationship from economic to security and climate change to health, education, science and technology, space and deep seas intends to add to the US clout in world power politics. Since the QUAD partners have come together on a common platform, they would like India to present itself as a shining example of democracy. Hence, Secretary Antony Blinken, during an interaction with the civil society, indirectly advised India to understand the need for promoting a vibrant civilsociety,which is inclusive and democratic.

Since Biden administration has been raising the flag of democracy and human rights all around the world, from China to Africa and Latin America, it was very natural that Blinken specifically made this issue as part of his agenda, but was cautious enough that his first ever India visit was not marred by this controversial issue, as Indian external affairs minister very sternly countered American approach to civil liberties.

Another contentious lingering issue of supply of Russian S-400 anti-missile systems to India has also not been resolved and it would not be wrong to say that CAATSA sword is still hanging over India. Secretary Blinken didnt mince his words and said if such transfer happens, US law will apply. Defence Secretary Austin was also evasive on the S-400 issue. However, it is well assumed in diplomatic circles that US which needs India in advancing its geopolitical strategy would not go so far to apply CAATSA related sanctions on India. The issue is not strictly within the domain of Pentagon, but have wider ramifications and US administration would have to deal with this dilemma sooner or later.

Though Secretary Blinkens visit was meant to strengthen and propel bilateral relations to a new height, the visit was significant more in geo-political context. Burning issues like Afghanistan, China and Pakistan were discussed at length along with the evolving Quad group, which Antony Blinken made it very clear that it will not be converted into a military alliance. Neither India would allow itself to be co-opted as a military ally of USA. 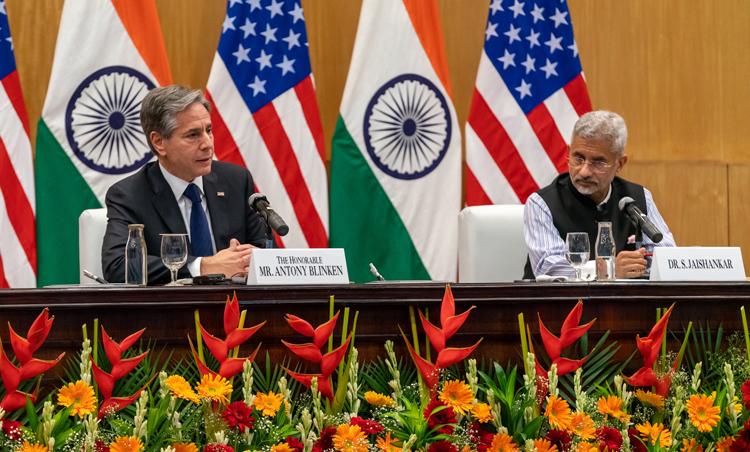 However, both the democracies are strengthening their military cooperation no less like an allied partner, from extending moral and invisible military support to India against on going military standoff with China, US has been supplying military systems and technology unimaginable a decade ago. Strategic relations have transformed beyond imagination in recent years with comprehensive list of cooperation between armed forces, which is drawing attention of the world. Yet, India would not be willing to promote this relation beyond a point when it will start impacting and hurting bilateral relations with Russia.

In this backdrop, Secretary Blinken and External Affairs Minister Dr S. Jaishankar discussed in great length every issue touching India- US bilateral relations. As Ex-PresidentBarrack Obama described India US relations as the defining partnership of the 21st century, the next President Donald Trump worked vigorously on these directions and present President Biden has already shown his commitment to take this relationship to newer heights. India is also reciprocating the US sentiments. So, South Block mandarins of RaisinaHills would have to prepare for Prime Minister Narendra Modi visit to Washington DC later this year not only for bilateral summit with President Joe Biden but also attend first ever in-person QUAD summit of India-Australia-US and Japan.

Besides meeting with Jaishankar, the US top diplomat also had in-depth discussion with Indias National Security Advisor Ajit Doval on specific issues like ways and means to counter Chinas aggressive behaviour all around the world, Pakistans role in fomenting troubles in the region, evolving situation in Afghanistan and its impact on regional security before leaving for his home country after paying a courtesy call to Prime Minister Narendra Modi.

While meeting Blinken, Prime Minister Modi said that Indo-US strategic partnership would be of even greater global significance in the coming years, in the context of the challenges posed by Covid-19 global economic recovery and climate change. While jointly addressing media with External Affairs minister Jaishankar, Secretary Blinken said that over last couple of decades this relationship has grown stronger and deeper across multiple administrations in both of our countries and President Bidens determination is to continue in exactly that direction, to grow it even stronger and even deeper.

In fact the new China challenge both to India and US acts as a glue to further bind the two great democracies. While talking to media, Secretary Blinken said,for the United States, in a way as for India, its both one of the most consequential and most complicated relationship that we have. 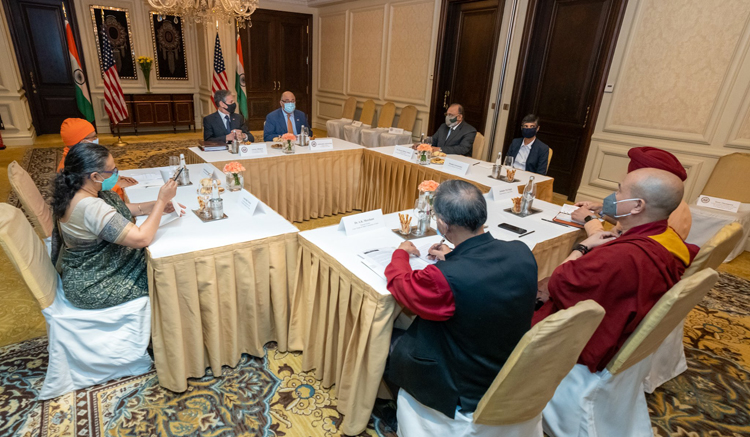 In fact before Secretary Blinkens arrival to New Delhi, the US State Department, in its statement, said that United States and India have a strong strategic partnership founded on shared values and a commitment to a free and open Indo-Pacific region. The United States supports Indias emergence as a leading global power and vital partner in efforts to ensure that the Indo-Pacific is a region of peace, stability and growing prosperity and economic inclusion. The United States and India cooperate on a wide range of diplomatic, economic and security issues, including defence, non-proliferation, regional cooperation in the Indo-Pacific, shared democratic values, counter terrorism, climate change, health, energy, trade and investment, peacekeeping etc.

US-India defence cooperation is reaching new heights, including through information sharing, liaison officers, increasingly complex exercises like Malabar and defence enabling agreements such as the secure communications agreement COMCASA. As of 2020, the United States has authorized over US $ 20 billion defence sales to India. Through the United States India Defence Technology and Trade initiative both the countries work together onco-production and co-development of defence equipment.

These cooperative ventures along with high level visits will continue to add new vigour and strength to India-US strategic partnership, which is disturbing Chinas strategic planners, as it is likely to emerge as the most important partnership of the 21st century. Secretary Blinkens July 27-28, 2021 visit to India has laid the groundwork for future directions of this partnership.