India-Russia: Defence to get boost

The Putin-Modi hug in New Delhi, displayed the bonhomie that continue to exist between Indian and Russian leadership despite vastly changed geo-political equations. 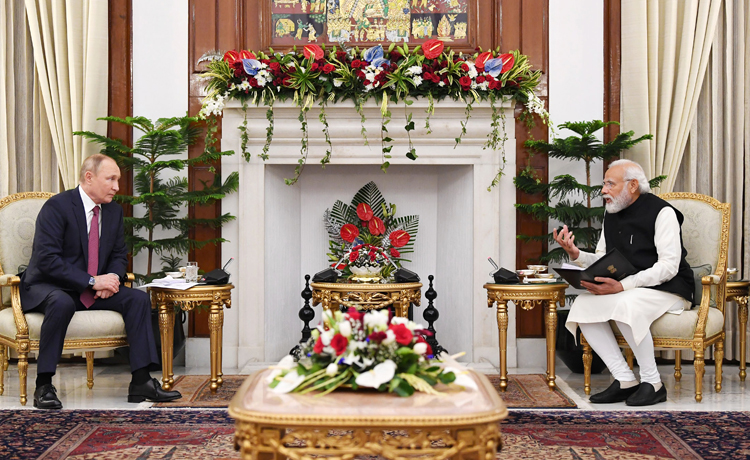 With the beginning of the delivery of worlds most advanced S-400 anti-aircraft missile systems just on the eve of President Vladimir Putins visit to India for annual summit rendezvous, India - Russia defence partnership can be said to have reached its pinnacle. In fact defence is the only sector where IndiaRussia relations can be said to be booming as evident from the joint statement released after the December 6 talks in New Delhi, preceded by first ever 2+2 ministerial talks.

In spite of differences over many international issues of mutual concerns, Russia still continues to be major supplier of most sensitive of defence systems to India. From assisting India in developing Nuclear Submarine Arihant, to partnering India in joint development and production of Supersonic Cruise missile Brahmos, Russia has emerged as credible supplier of most advanced defence technology and systems to India.

Welcome to India my friend President Putin. Our meeting today will strengthen our Special and Privileged Strategic Partnership. The initiatives that we take today will further increase the scope of our cooperation to new areas. @KremlinRussia pic.twitter.com/v699GK4BEM

In fact, the Putin-Modi hug in New Delhi, displayed the bonhomie that continue to exist between Indian and Russian leadership despite vastly changed geo-political equations. As President Putins second international visit, since the onset of the Covid-19 pandemic, happened to be India reflects the priority, the Russian leadership attaches to diplomatic and political relations with New Delhi in the quick changingdiplomatic relations in the international arena. With India getting closer to US and European powers and Russia hugging China to counter US and Europe, there was scepticism in strategic circles about the depth of this relationship getting eroded. In spite of India joining QUAD and an active proponent of Indo-pacific construct and Russia expressing its resentment over Indias eagerness to be a serious participant, Vladimir Putin has committed to further embolden Special and Privileged Strategic partnership with India by jointly inking 28 bilateral agreements and an exhaustive 99 paragraph joint statement encompassing all aspects of bilateral relations, from space to energy and defence to counter terrorism, along with international issues of mutual interests.

In spite of differences over many international issues of mutual concerns, Russia still continues to be major supplier of most sensitive of defence systems to India

That Vladimir Putin chose to make his second stop outside Russia during the continuing international crisis posed by the covid pandemic very well indicates the significance he attaches to relations with India. To further strengthen this he approved the first ever 2+2 foreign and defence ministers dialogue and promoted a fresh 10-year pact on military and technical cooperation as well giving a final go ahead for a contract for the manufacture of AK-203 Kalashnikov rifles in India.One disappointment was the lack of consensus on various issues related to logistics agreement between two armed forces, which was on the pattern of agreements signed with US and few other countries.

The 10-year agreement was okayed after the 20th meeting of India Russia inter-governmental commission on Military and Military technical collaboration (IRIGC- M&MTC ) was held between the ministerial delegations led by Rajnath Singh and his counterpart General Sergei Shoigu . The agreement signed in this meeting  the10 year Defence Cooperation Program, outlines the ongoing defence cooperation and future possible cooperation between the two countries. Such agreements are being signed since 1994.The new agreement has come into effect this year and will last till 2031. Another agreement signed formally relates to Rupees 5,124 crore contract for acquiring over six lakhs AK-203 assault rifles. This contract will be implemented through the joint venture called Indo-Russia Rifles Private limited. Both the countries are also discussing procurement of IGLA-S very short range air defence missile systems (VSHORADS). The deal will facilitate manufacture of the shoulder fired anti-aircraft missile systems by technology transfer to Bharat Dynamics. Initially this $1.5 billion deal will also involve off-the-shelf purchase.

Military and military-technical cooperation has traditionally been the strongestpillar of Special and Privileged Strategic Partnership between India and Russia. Responding to Indias quest for self-sufficiency, the partnership is reorienting presently to joint research and development, co-development and joint production of advanced defence technology and systems.

With India getting closer to US and European powers and Russia hugging China to counter US and Europe, there was scepticism in strategic circles about the depth of this relationship getting eroded

Both Sides agreed to take forward ongoing engagements to encourage joint manufacturing in India of spare parts, components, aggregates and other products for maintenance of Russian origin Arms and defence equipment under Make-in-India program through transfer of technology and setting up of joint ventures for meeting the needs of the Indian Armed Forces as well as for subsequent export to mutually friendly third countries. 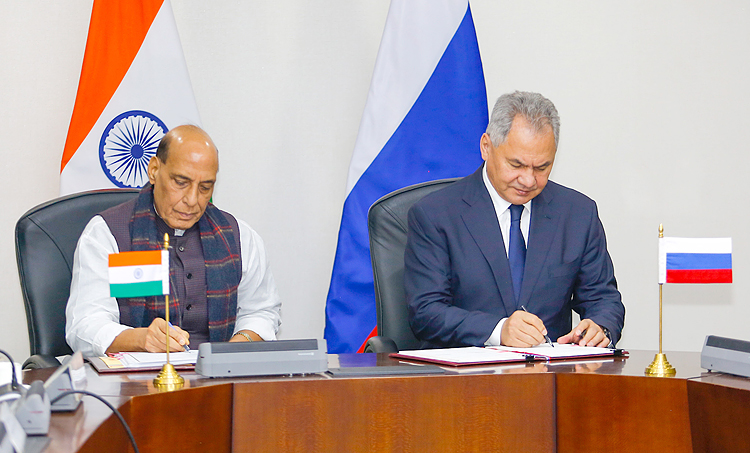 Emphasising the importance of joint research in science, technology and innovation, Putin and Modi welcomed the signing of Roadmap for Science, Technology & Innovation Cooperation and expressed satisfaction with respect to launching joint calls in priority areas as stated in the Roadmap.The two leaders expressed satisfaction on launching of India-Russia Technology Assessment and Accelerated Commercialisation Program by the Department of Science & Technology, Government of India and Russian Foundation for Assistance to Small Industrial Enterprises (FASIE), which provides opportunities to Start-ups and SMES of the two countries to address societal challenges through innovative technologies.

Attended the 2+2 Ministerial Dialogue with Russia in New Delhi.

It was a great pleasure to discuss and exchange opinion on certain significant issues of common interest.

We look forward to the Summit meeting to be held later in the evening. pic.twitter.com/KvLCyPFFld

Both sides also agreed to facilitate collaboration between government and private sector organisations to find ways of joint development of software products, platforms and services as well as in the area of electronics manufacturing. The two sides confirmed their interest in further developing cooperation in the sphere of digital technologies, including those related to information protection, security of critical infrastructure and law enforcement.

Thus, the joint statement reveals that both countries have resolved to further strengthen defence partnership. If we ignore Russias policy of neutrality on India-China border wrangling, India-Russia defence relations can be said to be at its best, considering the fact that Russia has met its commitment to supply S-400 and other advanced defence systems which the Indian armed forces will mainly be using against its enemies like China and Pakistan,countries who are getting closer to Russia. 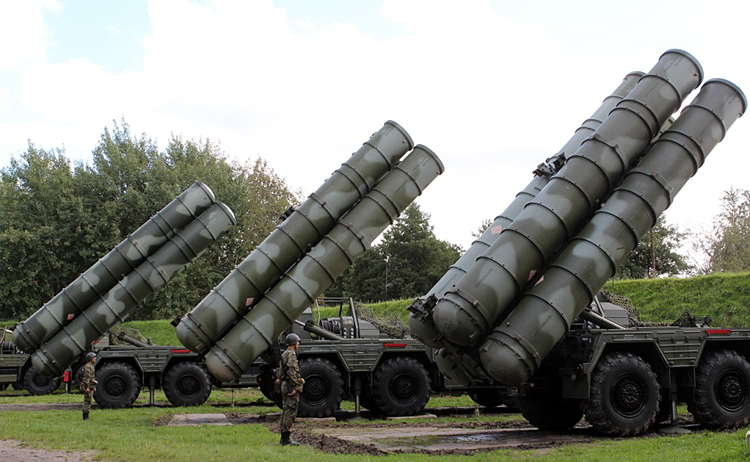 Infact, the recent drift in bilateral ties have happened mostly because of China, Pakistan, Taliban, Indo-Pacific and QUAD. India has been sensitive to Russias tantrums in Ukraine and refrained from making any comment that would irk Russia, while Russia has been vocal about India getting closer to US and QUAD in the Indo-Pacific region.

Amidst on going Sino-Indian border tensions, Vladimir Putin setting his feet on Indian soil does convey a message to Indias adversaries

However, amidst on going Sino-Indian border tensions, Vladimir Putin setting his feet on Indian soil does convey a message to Indias adversaries. However there is a realisation in Indian and Russian strategic circles that for special privileged bilateral strategic partnership to grow, we need more solid pillars like economy and trade to emerge and flourish. Economy and trade continue to be the weak link in India-Russia strategic partnership. The bilateral trade between two giants still hovers around $10 billion whereas China-Russia trade is over $100 billion. This is why President Putin and Prime Minister Modi have set a modest $30 billion bilateral trade target by 2025 and bilateral investment to reach $50 billion.

Both India and Russia need to recalibrate their bilateral relations which can fuel the Special and Privileged strategic partnership. A strong India-Russia relations will send an important message to China and Pakistan that Russia is indeed a friend in need for India, which has honoured its commitment to supply S-400 and other defence systems well in time for India to tackle China challenge.