In view of the continuously evolving geo-politics particularly in the Indo-Pacific, Catherine Colonna and Jaishankar reaffirmed their shared commitment to deepen the India-France strategic partnership 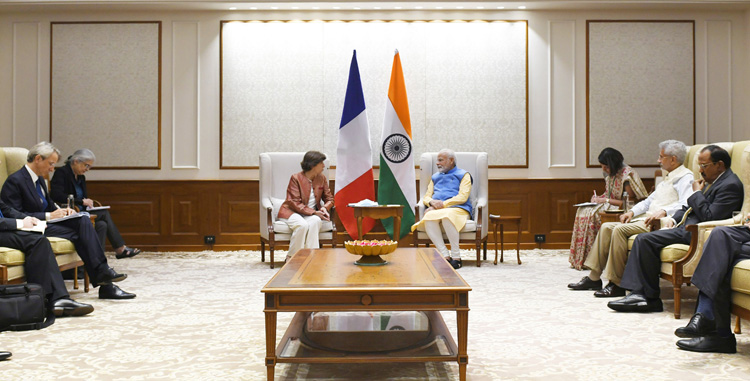 As India and France celebrate silver jubilee of their strategic partnership next year, the new French foreign minister Catherine Colonna, under the second term presidency of Emmanuel Macron, took stock of deepening strategic relations with India during her maiden visit (September 13-15) to New Delhi. After an extensive in-depth discussion with External Affairs Minister S. Jaishankar on bilateral, regional and international developments, displayed an uncanny similarity of views on China's behaviour and pledged to together counter the aggressive and expansionist designs of the Dragon nation. With this aim the two countries are already cooperating at the bilateral and multilateral forums. Like India, France has a deep interest in keeping the sea lanes of trade open for international shipping in the Indo-Pacific region.

The two countries find themselves extensively cooperating on world forums, especially in the UNSC, and now exploring new domains of cooperation in the Blue Economy and Ocean Governance

To give thrust to the strategic partnership, the two countries had adopted a bilateral roadmap in February this year. Even before the full implementation of this ambitious roadmap, the two countries find themselves extensively cooperating on world forums, especially in the UNSC, and now exploring new domains of cooperation in the Blue Economy and Ocean Governance.

France, an European nation, which also considers itself as a resident Indo-Pacific power, plans to expand its cooperation with India in the maritime areas. Sharing her concern, Catherine Colonna said that many challenges have emerged because of China and " we want to make sure there is no imbalance in the region. We know the role Chinese are playing." In view of the continuously evolving geo-politics particularly in the Indo-Pacific, Colonna and Jaishankar reaffirmed their shared commitment to deepen the India- France strategic partnership. 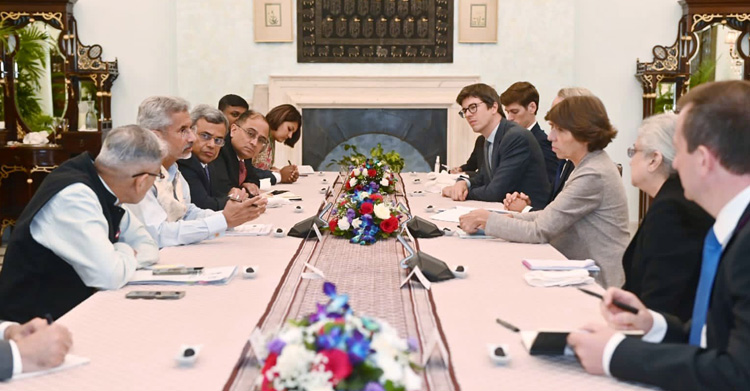 From defence to diplomacy France has an impressive track record of protecting and promoting India's interests. After France stood with India in the wake of international opprobrium after May 1998 Pokharan nuclear explosions, both the countries signed the strategic partnership agreement, which has helped both the nations cement their relations in defence, space and nuclear sector among others. After the bilateral talks, Catherine Colonna told a TV Channel, "we aim to give an additional dimension to the strategic partnership. We had a long lasting fruitful partnership. We are reliable partners, and we forged it in 1998."

As the French defence companies are eyeing mega Indian arms deals like the 120 multi-role fighters for Indian Air Force and six diesel submarines for Indian Navy, the two foreign ministers reviewed the ongoing defence industry cooperation and expressed satisfaction over the progress and especially welcomed the decision of the French arms giant Safran Group's decision to set up their largest and first aircraft engine MRO (maintenance, repair and overhaul ) facility in Hyderabad. The facility will be set up with an investment of 1200 crore ($150 million) and is expected to create about 1,000 jobs in Telangana. Colonna is also reported to have enquired about the Indian armed forces urgent requirement to acquire new fighters and submarines. France is seriously bidding for these multi-billion dollar platforms and has offered India the latest AIP version Scorpene submarines which will be an extension of Six Scorpenes under final phase of construction in Mazagon Dock yard in Mumbai. Similarly, France also wants to expand the Rafale fighter program to another 120 fighters under the Make in India program.

The armed forces of two countries are already interacting at the headquarters level and the soldiers of two forces are regularly exercising together so as to be ready to protect each other's economic and security interests in the Indo-Pacific region. Regular muscle flexing by navies of both the countries in each other's waters has generated concerns in Chinese strategic circles. Significantly, the two nations are not only cooperating bilaterally for mutual benefit but also forming trilateral alliances to use their clout for expanding regional footprint. The trilateral partnerships include the India-France-UAE trilateral framework and an India-France-Australia trilateral mechanism besides an Indo-Pacific trilateral cooperation fund.

During her interaction with Jaishankar, Catherine Colonna urged the officials of both the countries to prepare an agreed roadmap for cooperation in the India-UAE-France trilateral forum. Observers say that this will increase the footprints of both the nations in the gulf region. Also, the decision to revive the India-France-Australia trilateral is also very significant for Indo-Pacific region. The inaugural meeting of this grouping will be held in New York on the side lines of on-going UN General Assembly session. As part of their cooperation in the Indo-Pacific, both ministers have given the go-ahead for setting up an Indo-Pacific Trilateral Development Cooperation for support to India based innovators and Start-ups in taking their innovations to third countries, particularly in the Indo-Pacific region and explore opportunities to undertake development projects under the framework of International Solar Alliance, which has been jointly promoted by India, which has proved to be a very successful international joint initiative of the two countries.

In a very significant assurance, the French foreign minister said that developments in Ukraine will not overshadow France's commitment to the Indo-Pacific region. Colonna discussed with Jaishankar the recent developments in the region. Similar assurances have come from US administration also. From US to Europe, India is considered a vital node in the Indo-Pacific region without which counter China mission could flounder.

As strategic partnership flourishes on the strength of strong foundations of economic and trade relations both the countries welcomed the resumption of India-EU trade and investment agreements. India and France have agreed to give access to the respective labour markets to young professionals who are willing to contribute to the deepening of the economic, scientific and technological and cultural ties between the two countries. To deepen the strategic partnership, India has also invited France to join the Raisina Forum for Future of Diplomacy which aims to build a network of diplomats engaged with political and economic developments with the capacity to analyse emerging and complex global issues.

To give new dimension to the India France strategic partnership, as said by Colonna, both the countries are expanding their high-level cooperation in the Nuclear and Space sectors also. France is expecting India to accelerate the work on the proposed French nuclear power plants in Maharashtra's Jaitapur, which is pending since last one decade. Catherine Colonna is reported to have raised this issue with Jaishankar.

Catherine Colonna's visit to India has paved the way for the early visit of the French President during which the two nations are expected to significantly raise the level of strategic partnerships and express firm resolve to counter the challenges posed by international terrorism and China together.