Carl-Gustaf M4 to be 'Made in India'

Carl- Gustaf has a successful history since 1948 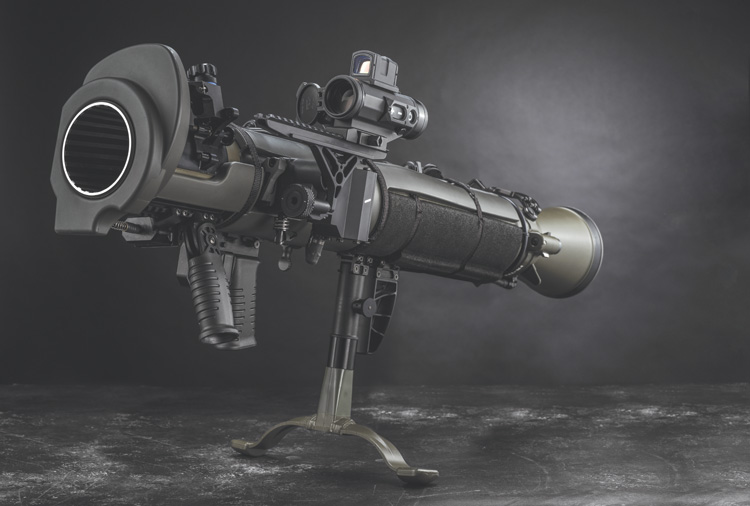 The new company Saab FFV India, will make the latest generation of state-of-the-art weapons in India

The Carl-Gustaf weapon system is designed to give troops the tactical advantage in any combat scenario, including neutralising armoured tanks, enemy troops in defilade, clearing obstacles and engaging enemies in buildings. The M4 is shorter than one meter and weighs less than seven kilos, so troops can react faster while remaining agile. The Carl-Gustaf M4 can be fitted with a wide range of sights to ensure maximum effect in any tactical situation and flexibility for the user. The system is attached with a standard clip-on telescopic sight, with additional options of open sight, red dot sight and advanced fire control devices.

The new company Saab FFV India, will make the latest generation of state-of-the-art weapons in India. Saab will partner with Indian sub-suppliers, keeping a view of the 'Make in India'. Saab FFV India plans to deploy complex technologies including the latest sighting technology and apply advanced manufacturing techniques like carbon fibre winding for the Carl-Gustaf, 1,500 meters range M4 weapon. The production of the shoulder-fired weapons will start in 2024, said Görgen Johansson, Senior Vice President and Head of Business Area Dynamics at Saab.

The shoulder fired Carl-Gustaf M4 is shorter than one meter, weighs less than seven kilos and has a range of 1,500 meters

"It is a natural step to set up a production facility for Carl-Gustaf M4 in India given the long and close association we have with the Indian Army as one of the foremost users of the system. We are glad to be able to contribute to the Government of India's goals of developing a world-class defence industry and proud to offer the Indian Armed Forces our Carl-Gustaf M4 made in India," Görgen Johansson added.

Responding to Jayant Baranwal, Editor-in-Chief, SP Guide Publications, Bo Thorn, President of FFV Ordnance AB, elaborated that, "the manufacturing facility in India will be a state-of-the-art facility. The Saab FFV India facility will be superior to the existing facility in Sweden and will be a complete manufacturing unit". Thorn will be the Chairman of this new facility, which will commence production in 2024.

The company has evaluated several sites for production facilities in India and in due course, will announce the site and names of the Indian Partners for the venture

Addressing a question on foreign direct investment (FDI), Johansson said that Saab is vying for a 100 per cent FDI, but if it doesn't materialise, then the company would go ahead with a 74 per cent FDI. The company has evaluated several sites for production facilities in India. In due course, they will announce the site and names of the Indian Partners for the venture. Johansson responded on the exports to the world, from the Indian production facility saying, "the weapon system will first go to Sweden and then it could be sent to various export markets. The ammunition for the system will continue to be manufactured in Sweden".

The Carl-Gustaf system has been in service with the Indian Army since the first cooperation agreement for production in India was signed in 1976. Over the years, Saab has partnered with Indian companies to make parts or components for its products on the global market. Saab will continue its partnership with Munitions India Limited (MIL) and Advanced Weapons and Equipment India Limited (AWEIL), the companies formed from the erstwhile OFB to manufacture the Carl-Gustaf weapon (M3) and its ammunition.