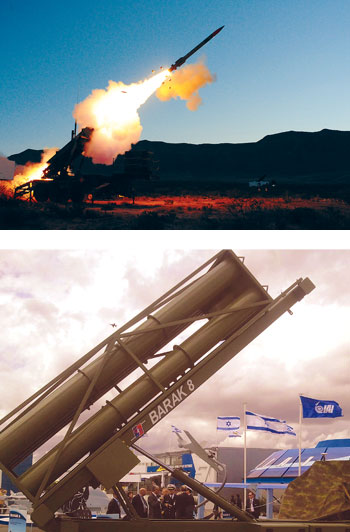 Air defence has evolved due to the rise of air power which initially started with fighter/bomber aircraft. Over a period of time attack helicopters, unmanned aerial vehicles, cruise and ballistic missiles became part of the air threat.

Army Air Defence (AAD) is a system which includes surveillance sensors, fire control devises, kill weapons like guns, missiles and directed energy weapons, and a battle management system to integrate all these subsystems. Air defence has evolved due to the rise of air power which initially started with fighter/bomber aircraft. Over a period of time attack helicopters, unmanned aerial vehicles (UAVs), cruise and ballistic missiles became part of the air threat. Thus the race between ‘air threat’ and ‘counter-to-air threat’ continues with both dimensions exploring new technologies to outdo each other. The overlay of unconventional warfare has added to the complexity of solutions.

All this results in multi-platform, silent and standoff threat.

Conventional Guns: Guns including machine guns were first used to counter air threat. These weapons were not designed for air defence role. During World War II, air defence guns started getting evolved. The most popular gun used by the Allies was 40mmL/60 of Sweden origin which was a purely mechanical gun with high rate of fire. This gun was succeeded by 40mmL/70 which was radar controlled. This gun is still in service in India for almost 50 years. Other countries produced many types of air defence guns with varying ranges, calibre and fire control system. Errors in firing due to a moving target in all three dimensions simultaneously like the fighter aircraft, gravity and effect of atmospheric conditions was made up by providing better fire control systems and a high rate of fire. High rate of fire limited the calibre of the gun or else the gun would become very heavy and thus impeding mobility. Conventional guns have reached a plateau in development, thus the focus for development is on fire control systems and ammunition. Some future trends are:

Electro-magnetic (EM) gun: The muzzle velocity is provided by EM forces and not by the expansion of propellant guns. EM gun can propel a three kg projectile at speed of more than 3000m/s. It is still under development.

Directed energy weapons (DEW): These weapons are right out of Star Wars. DEW weapons use their energy to disable/destroy targets and have a high requirement of power. They can be based on high power microwave, charge particle beam or laser. DEW weapons are under development in many countries including India. They are the classic PGMs.

Air defence guns have a limitation of calibre (normally maximum of 40mm) and so the shell is very small. The result was that it was difficult to fit an airburst or a proximity fuse in the nose. The calibre also limited the high explosive content of the shell. This has been overcome with developments in electronics and kill content. Airburst or proximity fuse bursts close to the target, and thus increases the kill zone. Some examples are:

Advanced Hit Efficiency and Destruction (AHEAD): This is produced by Rheinmetall. AHEAD has a cone of 100-150 tungsten alloy pellets as the kill content. The muzzle velocity is calculated for each round and time to the target is fed in the precision fuse resulting in the shell exploding at optimum range to create a sub projectile cloud. The pellets are hurled at great speed to destroy the target.

Penetrator with Enhanced Lateral Effect (PELE): PELE is also manufactured by Rheinmetall. This is a very unique concept where fragmentation of the shell is caused without explosive and fuse but has high penetrative power and lethality. The outer shell and its inner filling are made of material with different densities which cause rise in pressure on impact and fragmentation.

Driven Ammunition Reduced Time of Flight (DART): DART projectile is guided by a beam, has canard control with a range of five-km and a proximity fuse which bursts between 5 metres and 10 metres.

SAM systems were developed to overcome the shortcomings of the air defence guns like limited range and accuracy. Serious attempts to develop SAM systems started during World War II but none were made operational. During the Cold Warera, known systems deployed were the US’s Nike Ajax and the Soviet Union’s S-75 Dvina. Dvina was very popular and was deployed in many countries. The Indian Air Force was the first service to deploy missiles in India. Later on, both the Army and the Navy acquired SAMs. There were a large variety of SAMs developed world over ranging from radar controlled larger systems like HAWK of the US and Kvadrat of Russia. Ranges also varied from long-range to mediumand short-range. There were many configurations from static platforms to mobile platforms and man-portable air defence systems (Manpads). A guided missile has a propellant engine, guidance system, steering system and a warhead to destroy the target. Guidance systems can be radar or many other systems like radio-controlled, infrared, laser and using millimetre radar. The current developments are providing hyper velocity, better warhead and active seeker for a guidance system. The SAMs must cater for multiple long-range threat to very short-range threat with a very short reaction time. The missile should have twoway data link with high capacity and independent of the radar for very short reaction time and accuracy.

The Army needs highly mobile systems to deploy and redeploy very fast with a very short reaction time. It should also take care of short-range ballistic missiles (SRBMs), attack helicopters, cruise missiles and UAVs. Current systems like Patriot Advance Capability 3 (PAC 3) and latest version of Barak 8 claim to have all these attributes. PAC 3 warhead is a unique “hit-to-kill” (kinetic kill vehicle) capability that completely eliminates the need for a proximity-fused warhead. However, the missile has lethality enhancer (a small explosive directional warhead) which launches a stream of lowspeed steel fragments in the direction of the target in order to make the missile crosssection greater to enhance the kill probability. Barak 8 is a short- to long-range, providing point and area defence on land and sea. The missile is based on advanced missile state-of-the-art phased array, multimission radar, multi-layers communication and flexible command and control system. There are many more advanced systems being developed including for Manpads. The aim is to counter multiple air threat with a single missile system with speed and accuracy, in all-weather conditions.

Phase Array Technology: It uses active electronically switched array (AESA) in which transmitter and receiver functions are composed of numerous small solid-state transmit/receive modules (TRMs) which emit separate radio beams that interfere constructively to produce a beam. It is possible to change the operating frequency with every pulse. AESA radar can also produce multiple beams for multiple target tracking. India has indigenous AESA radar with its Akash SAM system.

Varied Band Spectrum: Operating in VHF band is difficult to jam and can detect targets with low radar cross section.

Over the Horizon Radar (OTH): The OTH uses bounce effect of HF waves with a detection capability of thousands of kilometres. It is primarily used for surveillance and anti-stealth.

Multi-band Spectrum: It functions simultaneously in multiple frequency bands with the help of AESA. Search and tracking is carried out in different bands. It has very effective electronic counter countermeasure (ECM) system.