The Philippine Army has a proud history. However, it is now entering one of the most important periods of its history as it seeks to modernise to meet the challenges of today and tomorrow. 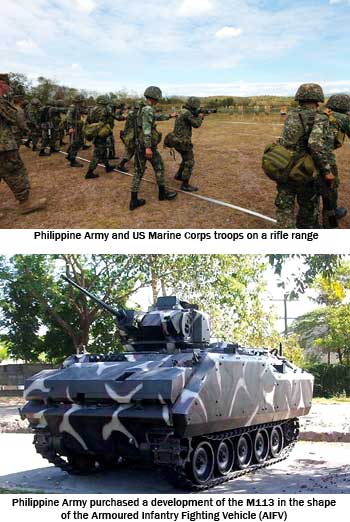 By the early 1930s the US had started the process under which they would grant independence to the Philippines, this would see the establishment of the Philippine Commonwealth on November 15, 1935, with full independence to be achieved on July 4, 1946. The Philippine Commonwealth passed the National Defence Act in December 1935, one of its first pieces of legislation, and this was to create the foundations for a new national army. The President of the Philippines Manuel Quezon then asked General Douglas MacArthur, the former Chief of Staff of the US Army, to oversee the development of the new Philippine Army with the rank of Field Marshal.

Philippine troops would go on to fight in Korea (1951-53) and would participate in Vietnam in the civil affairs role. The main challenge for the Philippine military would be domestic though, with campaigns against Communist insurgents and secessionists taking place from the 1940s through to the present day. 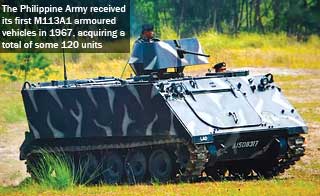 Mobility Developments in the Philippine Army

Over the years the Philippine Army has acquired a somewhat diverse selection of armoured vehicles. Now as a part of its modernisation efforts it is looking to bring into service new capabilities, while rationalising its legacy vehicle fleet as far as possible.

The US ‘Excess Defense Articles (EDA)’ programme allowed the Philippine Army to acquire 114 M113A2 vehicles from US stocks with deliveries from 2012 onwards. Another acquisition saw the Philippine Army acquire 28 more M113A2 vehicles, which Elbit will upgrade under the terms of a $19.7 million contract. This will result in 14 Fire Support Vehicles (FSV) that will be equipped with a Scorpion tank turret mounting a 76mm gun. Four of the M113A2 will be equipped a 25 mm cannon mounted in an Elbit Remote Control Weapon Station (RC WS), six will have an RC WS mounting a 12.7mm machine gun and four will be configured as armoured recovery vehicles (ARV). All 142 of these M113A2 vehicles will be taken into service with the Mechanised Infantry Division of the Philippine Army.

Legacy armour assets include the survivors of the 120 M113A1 vehicles acquired from 1967 onwards. In the late 1970s a derivative of the M113 in the form of 51 FMC AIFV was acquired, 32 of these vehicles had a turret-mounted 25mm cannon, 13 had a cupolamounted 12.7mm machine gun and six were ARV variants. More recently in 2010 Turkish company FNSS delivered six ACV-300 APCs (with a cupola-mount 12.7mm machine gun) and an ACV-300 ARV, the ACV-300 is itself a development of the FMC AIFV design.

In terms of wheeled armoured vehicles, the GKN Simba, Cadillac Gage V-150/V-150S Commando and the Bravia Chaimite were all acquired in reasonable numbers, but many have been lost in operations and eventually new generation of wheeled armour will be required. Armoured versions of AM General HMWV are also in service in the M1025 and M1114 versions. Finally we should mention the fact that the Philippines acquitted some 45 Scorpion light tanks in the late 1970s, many of these were lost in combat. Others had their turrets removed to create M113 FSV systems, the Elbit contract is not the first time that the Philippine Army has acquired FSVs in this manner.

The Philippine Army has a proud history. However, it is now entering one of the most important periods of its history as it seeks to modernise to meet the challenges of today and tomorrow. Years of operations against insurgent and secessionist forces took their toll on the Philippine Army, furthermore the Philippine Army and the rest of the AFP had suffered from years of underfunding. By the 1990s it was obvious to the military leadership and the politicians that something had to be done. This resulted in a piece of legislation known as the AFP Modernisation Act (Republic Act 7898), the aim here was to provide a legal framework for a 15-year defence modernisation programme. Although the act came into force in February 1995, it never achieved its objectives due to lack of available funding.

In 2010 a new government came to power in the Philippines under President Benigno Aquino II. The need to take urgent action on defence modernisation was understood, and a revised version of the AFP Modernisation Act (Republic Act 10349) came into effect on December 11, 2012. As before this is a 15-year defence modernisation programme, but unlike before sustained economic growth under the Aquino government is providing the funding necessary to have a real modernisation programme. Additionally an effective and transparent procurement structure is in place to guarantee that programmes deliver what is required.

The Philippine Army had developed its own modernisation strategy known as the Army Transformation Roadmap 2028 (ATR2028), this was an 18-year duration programme that came into effect in 2010. The purpose of ATR2028 is to make the Philippine Army a ‘world-class army’ by 2028. Both the Philippine Navy and the Philippine Air Force have their own longterm strategies as well, but they all work in parallel with the overall policy direction imposed by the AFP Modernisation Act.

The objective of the AFP Modernisation Act is to allow the AFP to provide a ‘Minimum Credible Defence Posture,’ with this being achieved through the joint creation of a joint force structure that combines land, air and naval forces. To meet this goal, by the time that the third-phase of the 15-year AFP Modernisation Act is completed in 2027, the Philippine Army will have evolved into what is described as a “Joint Force Land that can perform a wide spectrum of capabilities from peacetime development, to low intensity conflict and to limited conventional war.”

The task of modernising the Philippine Army should not be underestimated, simply because there is so much that needs to be done. On top of that, the Philippine Army finds itself being given missions that in other countries might fall to the air force and the navy, for example the programme to acquire a Shore-Based Missile System, of which more information is given below.

It should be noted that in the first phase of AFP Modernisation Act funding, running through to 2017, that the other services have received far more resources than the Philippine Army. The main Army programmes were the Shore-Based Missile System, the acquisition of communications equipment (VHF 2-5 W handheld radios and HF 50 W vehiclemounted radios), the Rocket Launcher Light and the Night Fighting System (night vision goggles and weapon sights).

In total some $145 million has been allocated for the Shore-Based Missile System, a land-based anti-ship missile system with 12 launcher systems and associated equipment being required. This procurement has high priority and the aim is to complete the acquisition process as quickly as possible, hence only a limited number of bidders will be considered. BrahMos Aerospace of India is seen as a significant contender for this programme, although there is also interest in coastal defence options currently in service in the Scandinavian countries.

The Rocket Launcher Light programme will replace some 186 M18 57mm and M67 90mm recoilless rifles and Airtronic USA has been selected to supply 400 units of its version of the RPG-7 system. However, other infantry weapons procurements are also taking place. Remington Arms of the US has received a contract to supply 63,000 M4 5.56mm rifles (originally the contract was for 50,629 rifles). A total of 100 Serbian M69B 81mm mortars have been acquired via Israel, along with supplies of mortar ammunition. Other infantry weapons activity is focused on the refurbishment of existing weapons by the Government Arsenal, such as the M16A1 rifle (many of which were manufactured under licence in the Philippines). Over 22,000 smoke and fragmentation grenades have also been acquired, while new body armour is being introduced as well.

Turning to artillery, in early March the 155mm Towed Howitzer Acquisition programme got underway, the aim was to acquire 12 guns, 240 HE rounds and an integrated logistics support package. Programme timetable had the decision to be announced at the end of March with the equipment to be delivered one year later. Eventually there were only two bidders involved Elbit Land & C4I Systems (Elbit having previously purchased Israeli artillery and mortar specialist Soltam) and BNT Tvornica based in Novi Tvarnik Bosnia Herzegovina. Elbit were awarded the contract, which had a value of $8.43 million, yet another successful win in the Philippines for the Israeli company. BNT might have other options in the Philippines in connection with a future Multiple Launch Rocket System (MLRS) requirement and they also make a version off the M69B 81mm mortar as used by the Philippines. Currently the Philippine Army has a limited number of Soltam M-71 155mm howitzers and five M114 155mm howitzers in service.

One significant weakness for the Philippine Army, and indeed for the AFP as a whole, is the lack of a viable air defence capability. To resolve this issue a number of air defence programmes are under investigation, including the acquisition of a Manportable Air Defence System (MANPADS) capability. Moving up the scale the AFP is looking at a medium-range air defence capability and has shown interest in the Rafael Spyder system and in the acquisition of the Raytheon HAWK system. At this point both the AFP and the Philippine Army have yet to really define their air defence goals or allocate a procurement budget for this category of weapon system.

The Philippine Army has also moved to upgrade its support vehicle fleet in recent years. KIA of the Republic of Korea has made significant sales of KM-250/KM-450 and KM-500/503 series vehicles. The Philippine Army has also used its access to the US ‘Excess Defense Articles (EDA)’ system to acquire trucks, quantities of M35 2.5 tonne trucks were acquired in 2011 and 2013 to add to the existing fleet, with M939 5 ton trucks being delivered in 2010 and 2013. In addition they are a major operator of the AM General HMWV vehicle with many hundreds in service in many different variants, including the M997A2 ambulance version, 23 of which were purchased by the AFP and delivered in November 2011, 19 of which are in service with the Philippine Army.