India’s conventional advantage stands faced with a stalemate brought about by introduction of Hatf IX or Nasr (missile) by Pakistan. This implies that India must also have limited nuclear options up its sleeve. 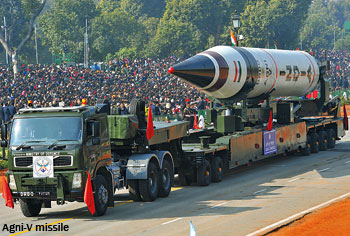 Pakistan by introducing tactical nuclear weapons into its armoury has attempted to checkmate India’s conventional war doctrine of proactive offensive from a ‘cold start’. Since India’s military has been preparing to fight in a nuclear environment since its Exercise Total Victory in 2001, it is not at the conventional level that India is seeking an answer to Pakistan’s nuclear challenge. From the recent flurry in strategic circles brought on by BJP’s reference to nuclear doctrine in its manifesto has emerged contending views on what India must do, firstly to deter Pakistan and secondly, to respond effectively.

Nuclear orthodoxy would lie in believing that ensuring the credibility of ‘massive’ retaliation assures deterrence. Faced by credible Indian actions to ensure follow through with its doctrine will stay Pakistan’s nuclear hand. India by not recognising any distinction between tactical and strategic nuclear weapons and believing that limited nuclear war is a contradiction in terms will appear implacable to Pakistan. Pakistan will then desist from nuclear first use.

Given the magnitude of such a strike, it can plausibly be argued that Pakistan would be ‘finished’. But would the war end at that? Pakistan has taken care to get into the lower three digits in terms of warhead numbers. These it has been cautious enough to spread across six to ten or more sites. Therefore, it has potential for counter strike, or a second strike capability. It is unlikely that India’s missile defences, currently in infancy and likely to be of limited credibility when mature, would be able to ward off the counter strike entirely. Even if such a counter is broken-backed, it would be considerably damaging and likely of ‘unacceptable damage’ levels if not more. India would then, as part of its ‘massive’ strike, have to ensure a counter force attack to set back this residual ability of counter strike of Pakistan.

A counter force attack targeting Pakistan’s nuclear assets would of necessity have to be considerably large. India would be faced with a large target set and widely spread with Pakistan’s ‘crown jewels’ being with the strategic forces commands of all three services across Pakistan and indeed if on diesel submarines, also at sea. Some would be postured forward to give credibility to the low nuclear threshold it projects. Some may be held back as reserve in order to provide for a second strike capability.

India can decrease the nuclear ordnance used by ensuring degradation through conventional means as also by selective targeting, such as of Pakistan’s command and control systems. At places even Special Forces could be employed. It can make the nuclear degradation task easier by relying on intelligence, both technological and human and on foreign sources of support on this score, including perhaps Israel and at a pinch even the US.

A degraded arsenal would imply reduction by about a third, which means taking out about 40 warheads. Even if conventional attacks take care of a fourth of this amount, there are still 30 remaining. To take out 30 weapons that are militarily ready to use, would require at least an equivalent number to be launched. More likely, a nuclear degradation strike would involve a minimum 50 nuclear explosions in Pakistan.

As mentioned if Pakistan was to launch a bedraggled counter strike, comprising, say, a sixth of its numbers left, this number increases to 60 explosions. Even if India takes care to configure most of its retaliatory strike to ensure against fallout, Pakistan is unlikely to be so inclined. Therefore, there can be expected to be at least 30 mushroom clouds formed by about 60 explosions across the subcontinent.

Pakistan with its ten nuclear bombs lobbed cannot be expected to take out more than perhaps three cities. Even if we are to here assume that Mumbai and Delhi are not among these and India can cope with three cities less, visualising 30 fallout hotspots, including urban centres, may give a better idea of the post-nuclear exchange environment for the region. A report late last year by the Physicians for Social Responsibility and the International Physicians for the Prevention of Nuclear War, ‘Nuclear Famine: Two Billion People at Risk?’, is on effects on climate and in turn impact on agricultural production. Its hypothetical scenario is of a limited nuclear war between India and Pakistan involving 100 detonations. Since in our scenario only 60 weapons have been used, it would imply that these figures can be reduced by about a third. Even so, they are bad enough.

Surely then, such a possibility should deter Pakistan from nuclear first use. Therefore, at first blush, ‘massive’ seems to be a plausible doctrine. However, the problem is that since the major portion of the nuclear winter would be brought on by India’s doing - its going ‘massive’ - India too would be self-deterred. This would increase Pakistan’s propensity for nuclear first use, especially in a low-threshold, early-use mode comprising low opprobrium levels of attack with limited nuclear ordnance.

If first use possibility is heightened for want of credibility of the ‘massive’ formulation, anticipating the nature of Pakistani nuclear first use and having an appropriate response is in order. This owes to India wanting to work its conventional advantage in case necessary. The conventional advantage stands faced with a stalemate brought about by introduction of Nasr by Pakistan. This implies that India must also have limited nuclear options up its sleeve.

It is also evident that neither country can possibly think of taking further step up the nuclear ladder than the very lower rungs. Receiving ‘unacceptable damage’ from Pakistan may set India back with respect to its main long-term challenge on the eastern front. It is here that a ‘flexible’ nuclear retaliation doctrine makes more sense than ‘massive’. The apprehension among advocates of ‘massive’ is that in case ‘massive’ is abandoned in favour of ‘flexible’ then there is a threat of going down the Cold War nuclear war waging doctrinal route of hyper alertness, abandonment of ‘minimum’ in the doctrine and an operational readiness enabling the military greater say at the strategic and operational levels. There is also the need to think about escalation control and war termination.

This debate between ‘massive’ and ‘flexible’ currently ongoing means a ‘third model’ is necessary. The third model has not found mention in the recent debate though it has been around since the early 1990s in the writings of General Sundarji. His conventional war thinking, recently revised by the move towards Cold Start, eclipsed his nuclear doctrinal recommendation. His sage advice of the early 1990s can help pull India out of its strategic cul de sac.

The Sundarji doctrine has it that adversarial nuclear states must work out a modus vivendi to end a nuclear confrontation at the lowest threshold of nuclear use, if necessary by mutual political and diplomatic concessions. The sense in the Sundarji doctrine is that it eliminates ‘massive’ as option and caters for the shortfalls of ‘flexible’ doctrine.

It is predicated on the cooperation possible between both nuclear belligerents mutually interested to avoid a worse outcome. This would entail creating the necessary nuclear risk reduction measures prior and working these with the help of the international community in case conventional push comes to nuclear shove. The opportunity for a review can help bring Sundarji’s nuclear sense back to the subcontinent.

Contours of the Doctrine Review

It is possible that this is already present in ample measure in that even as India maintains the ‘massive’ declaratory doctrine for deterrence; it may well have an operational doctrine that envisages limited nuclear operations for the contingency of breakdown of deterrence. Therefore the operational nuclear doctrine may already be different and predicated on ‘flexible’ doctrine. In this case, the impending doctrine review provides India an opportunity to, firstly, to match the declaratory and operational nuclear doctrines, and, secondly, cater for escalation control through nuclear risk reduction measures.

That a convergence between declaratory and operational nuclear doctrines is necessary stems from the need for credibility. A nuclear state must say what it means and means what it says. The fear may be that admitting to ‘flexible’ doctrine involving limited nuclear operations may be to admit incredibility of the ‘massive’ formulation. It may be thought to reduce India’s status as a responsible and mature nuclear power that abstains from nuclear war-fighting thinking, believing that nuclear weapons are a class apart as weapons. Also, there may be skepticism on Pakistan’s credibility as an cooperative interlocutor in a nuclear risk reduction mechanism such as a nuclear risk reduction centre.

However, a convergence between the two – declaratory and operational—would enable limiting nuclear war in case it does break out. Given that potential triggers remain active; this is not a non-trivial consideration, especially when both states continue to be proactive on the subconventional and conventional levels respectively.

But more importantly, any such shift must not degrade deterrence. While it is self-evident that ‘massive’ is incredible, it is arguable that ‘flexible’, with escalation controls of the ‘third model’, does not degrade deterrence. Therefore, while a shift is incumbent to make to ‘flexible’, can it involve a move all the way to the ‘third (Sundarji) model’ is the question.

Since ‘flexible’ does not answer to the critique of the ‘massive’ votaries that escalation is ‘inexorable’, the third model can be used to supplement the ‘flexible’ model to enable escalation control and conflict termination. Clearly, war being an act of politics, limiting nuclear war is a must and only conducting limited nuclear operations aimed at exchange(s) termination and conflict termination can bring this about.

Therefore, thinking on how the combined political-diplomatic-information-military-nuclear operations will work out is what the doctrine review must strive towards. This is ever more so if indeed limited nuclear operations are what the Strategic Forces Command is already seized with. It cannot be solely a military exercise nor be military led. Doctrinal clarity towards this end will bring about the ‘all of government approach’ necessary to limit nuclear war.

The writer is author of India’s Doctrine Puzzle: Limiting War in South Asia (Routledge). He blogs at: www.ali-writings.blogspot.in.