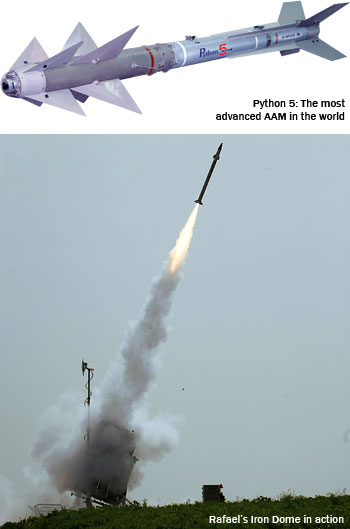 A blog of Israel’s Defence Forces (IDF) mentions how Israelis are regularly threatened by rocket fire from the Gaza Strip. Hamas and other terrorist organisations launch mortars, rockets and missiles towards Israelis cities. Since 2001, more than 15,200 rockets and mortars, an average of over 3 rocket attacks every single day, have targeted Israel. Hamas, the ruling entity of the Gaza Strip, is responsible for most of the rocket fire on Israeli population centres. The organisation – which is recognized by the US, UK, EU and Israel as a terrorist group – has been increasing the size and capabilities of its rocket arsenal, the blog mentions.

Twice since 2005, the IDF has been forced to launch major operations in response to heavy rocket fire on Israel’s civilians. The most recent, Operation Protective Edge, began after continual and relentless rocket attacks on Israeli cities since the beginning of 2014.

On July 7, 2014, the IDF launched Operation Protective Edge in order to restore quiet to the region and stop Hamas terrorism. The single goal of the operation is to stop Hamas incessant rocket attacks against Israel’s civilians. Since the start of the operation, over 1,000 rockets have been launched at Israel. Of those, 754 have hit Israel and approximately 201 were intercepted by the Iron Dome Missile defence system, states the blog.

In this article, we feature how Israel has used technology to thwart attacks on the country. In 2004, the idea for Iron Dome gained momentum with the installation of Brig. General Daniel Gold as the head of the research and development bureau of the Israel Defense Forces (IDF). In February 2007, Defense Minister Amir Peretz selected Iron Dome as Israel’s defensive solution to this short-range rocket threat. Since then, the $210 million system has been developed by Rafael Advanced Defense Systems working jointly with the IDF.

Iron Dome is the only dual mission counter rocket, artillery and mortar (C-RAM) and very short-range air defence (VSHORAD) system. Iron Dome is an affordable, effective and innovative defence solution (CR&AM Class) to the asymmetric threats of short-range rockets, (up to and over 70 km), and mortars as well as VSHORAD Missiles System (up to 10 km) against traditional Air Defense targets.

It has been selected by the Israeli Defense Ministry to provide the lowest layer of Israel multi-layered air & missiles defence umbrella. The system was chosen as the best system, offering the most comprehensive defence solution from a range of threats, in relatively short development cycle and low cost-per-kill.

Iron Dome is an advanced defence system, designed for quick detection, discrimination and interception of rockets & mortar threats with ranges of up to and over 70 km and against aircraft, helicopters, UAVs and PGMs. The system is effective in all weather conditions, including low clouds, rain, dust storms or fog.

It provides robust, yet selective defence. Its ability to discriminate between threats headed towards the defended area and those that will fall into the sea or open fields reduces costs and limits unnecessary interceptor launches. A single launcher can protect against a medium-size city. Iron Dome uses a unique interceptor with a special warhead that detonates the targets in the air within seconds. The system can handle multiple threats simultaneously and efficiently.

The ELM-2026B VSHORAD can be deployed as a local air defence system providing early warning and target track to surface-to-air weapon systems.

The ELM-2106 ATAR can be deployed as a local air defence system providing warning and target designation to surface-to-AIR weapon systems including MANPADS. The system can also be deployed as gap filters for supporting C3I centres for AIR Traffic Control (ATC). THE ELM-2106 ATAR has been field proven, operating in noisy and high-clutter environments.

This 3D portable radar detects a wide variety of flying platforms including low level high-speed fighter aircraft, hovering helicopters, low ultra-light aircraft and UAVs. The radar provides accurate range, azimuth and elevation angle measurements for each target, differentiating between aircraft and helicopters and classifying the helicopter type according to its blades returns.

ELL-8388 is a modern advanced 3-D ESM/ELINT surveillance system for tactical and strategic intelligence collection and air defence support. This integrated system has the unique capability of creating a 3-dimensional situation picture by providing location and dynamic tracking of airborne, shipborne, and mobile/fixed ground-based emitters.

The long-range, high performance, multi-sensor AEW introduces a new level of performance to airborne early warning, tactical surveillance of airborne and surface targets, and the gathering of signal intelligence. The ELW-2085’s four sensors are: Radar, IFF, ESM/ELINT and CSM/COMINT. A unique fusion technique continuously cross-correlates data generated by all sensors: this data is combined with an automatically initiated active search by one sensor for specific targets detected by other sensors.

A supplier of advanced artillery systems for over 25 years, Elbit Systems Land and C4I has proven experience with large variety of artillery guns, launchers and mortar types, advanced integration capabilities with various types of radios and artillery sensors, and a deep understanding artillery processes, ballistic computing and battlefield management.