Thermal Imaging (TI) detects objects based on heat emitted by them. A variety of advanced thermal imaging riflescopes are being used in military roles like patrolling, engaging targets and for use with snipers. 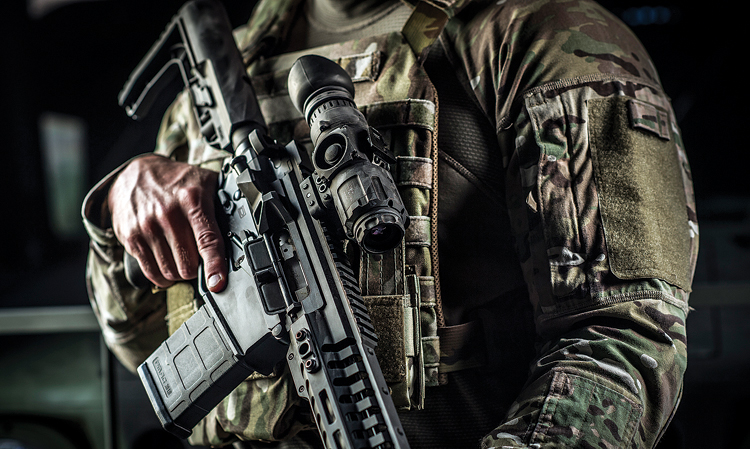 In the early history of warfare, armies were meant to rest at night as the soldiers could not see in the dark. But there was a continuous effort to use the darkness to achieve surprise. Use of moonlight for aiming and use of stars for navigation are some examples. Simple gadgets like the prismatic compass and other navigation aids combined with detailed day time reconnaissance were employed for operations at night. But modern technology like image intensifier and thermal imaging has enabled the military to fight during the night, almost as it was day.

Working of a Thermal Imaging – A Snap Shot

Thermal Imaging (TI) detects objects based on heat emitted by them. The warmer the object, the more infrared long-wave light it radiates and the more detectable it is. However it does not have high resolution of the image as compared to an image intensifier of the similar field of view. A special lens focuses the infrared light emitted by all of the objects in view which is scanned by infrared-detector elements which in turn form a detailed temperature pattern called a thermogram. The detector array works very fast and obtains the temperature information in about one-thirtieth of a second to make the thermogram. The thermogram is translated into electric impulses which are then converted into display data where it appears as various colors depending on the intensity of the infrared emission. There are two common types of thermal-imaging devices that is Un-cooled and Cryogenically cooled. Un-cooled is the most common TI device which can operate at room temperature, is completely quiet and activates immediately. However there have been critical developments in uncooled thermal imagers with the use of vanadium oxide and amorphous silicon which have made them suitable for head-mounted applications. Cryogenically cooled is more expensive but has an incredible resolution and sensitivity that result from cooling the elements. Cryogenicallycooled systems can discern a difference as small as 0.1 C from more than 300m away, which is enough to tell if a person is holding a gun at that distance. The critical considerations for any thermal imager include field of view (target size and distance), type of surface being measured (emissivity considerations), spectral response (for atmospheric effects or transmission through surfaces), temperature range and mounting (handheld portable or fixed mount). Other considerations include response time, environment, viewing port or window applications and desired signal processing. Fusing image intensification technology with thermal imagery brings out the best in both sensors. Some examples of thermal imagers being used by military are given below:

Enhanced Night Vision Goggle-Binocular (ENVG-B) Programme
To operate more effectively at night, US Army has given $391.8 million three-year contract to L-3 Insight during May, 2018 for the ENVG-B. The ENVG family represents helmet-mounted night-vision goggles that blend image intensification and long wave infrared sensors for combat at night, in bad weather, and in smoke and dust. Harris and L-3 Insight are building ENVG II, while BAE Systems and DRS are building ENVG III. ENVG III weapon sights also has an improved resolution and a wider field of view which enables rapid target acquisition.

Combination of ENVG III and Family of Weapons Sights-Individual (FWS-I) technology
The FWS-I, when mounted on a soldier’s weapon, will transmit its sight picture through radio to the ENVG III, which is mounted on a soldier’s helmet. The FWS-I is designed for the M4 and M16 rifles, and can mount on those rifles in front of day sights that have already been bore-sighted. The ENVG will combine thermal imaging with image intensification technology. A variety of modes will allow soldiers to see in their goggles only the image from the ENVG III itself, only the image from the FWS-I, or a combination of the two. Using a ‘picture-in-picture’ mode, the image from the FWS-I is displayed at the bottom right of the image that is coming from the goggle. This combines the rapid target acquisition technology and can be effectively be used for surveillance, aiming weapons during daylight, darkness, adverse weather and dirty battlefield conditions. This system should be with the U.S. Army by the first quarter of 2019.

L-3’s AN/PSQ-20B ENVG L-3 Insight. AN/PSQ-20B ENVG is a helmet-mounted dual waveband monocular which enables the user to view images through one eye, but not through two eyes as a binocular device can. The AN/PSQ-20B ENVG provides improved targeting and identification by fusing image intensification technology with thermal imagery to bring out the best in both sensors.

Trijicon is one of the leading companies for developing and marketing ‘no-light aiming systems’. It offers a large variety of advanced thermal imaging riflescopes for use in military role like patrolling, engaging targets and for use with snipers. There are 12 models to choose including five for hunting. Many thermal systems offer 17 micron technology and upscale or downscale their imagery, which creates a significant loss of detail. Trijicon®thermal optics utilises a MicrolR™thermal core that features a 12 micron detector LWIR (Long Wave Infra- Red) Uncooled Technology to deliver high performance, clean 640x480 imagery at an outstanding 60 Hz frame rate. 12 Micron 60 Hz High-Speed Frame Rate with VOx (Vanadium Oxide) which responses very well for infra red. Most thermal sights give you only one choice for black hot/white hot, which are commonly referred to as polarity. Trijicon®thermal optics come with MaxPol technology for maximum multi-polarity control. This feature gives you three modes of white hot and three modes of black hot so you can identify your targets in most of the condition. Trijicon also offers EDGE DETECT Mode, which is an entirely new way to view your target with more precision. It is a fraction of the brightness of other modes, so your eyes are not as prone to night blindness from the screen. Their thermal system is built rugged, tough and with MIL-STD-810G standards (which are US Military standards). Trijicon aims to ‘Take on the Night’ with their thermal imagers. Some examples are:

Trijicon IR-PATROL
The models include handheld, helmet-mounted or weapon-mounted systems. And if you already have a day optic sighted in, the IR-PATROL can be placed in front and used as a clip-on device for 24-hour tactical usage. All the models have a sensor resolution of 640x480.

M300W Rifle-Mounted Model. The IR-PATROL™M300W is a mini rifle-mountable system that works as a dedicated or clip-on thermal rifle sight. When not in use, the optional Wilcox®Side Flip mount conveniently flips the IR-PATROL M300W out of the way for zero obstruction. It has fully Adjustable Reticle System, Clip-On Mode Included, Optional Wilcox®Side Flip Mount, Mini Thermal Sight and Objective Lens Cap. The kit which comes along with is IR-PATROL™640x480 Thermal Monocular, Reticle System (with Clip-On mode), Wilcox Interface Shoe, Wilcox Flip Mount Rifle Base, 60 Hz High-Speed Frame-Rate Download/Video Cable. Field of View is 22°, Magnification E-Zoom is 1x Optical/8x Digit, Display Type Digital organic lightemitting diode (OLED is a light-emitting diode display which works without a backlight because it emits visible light). It uses a CR123 Lithium Battery with a life of 1.5 hr. @ 60 Hz. Also has EDGE DETECT mode.

Trijicon SNIPE-IR™. It comes with a 640x480 12 micron VOx sensor and OLED digital micro display that gives you clear, brilliant imagery at a fast 60 Hz frame-rate system—even through pitch-black darkness, has a advanced VisRelay collimating optic eliminates parallax. The Trijicon SNIPE-IR is optimized for use with a 4x day optic. NOSHOT ZERO Sight-In Easy sight-in integration for accurate calibrations and can be used in Clip-On, Hybrid and Stand-Alone Modes. Batteries 2 x CR123 with life of 3.5 Hours @ 60 Hz. The company advises to combine their Trijicon ACOG®combat optic with the clip-on SNIPE-IR™thermal sight for having a lethal 24-hour advanced weapons platform for maintaining maximum situational awareness and engaging targets.

Bharat Electronics Limited Optronic Devices Ltd (BELOP) Image Intensifier Tube manufacturing facility
BELOP (formerly BEL DELFT) is an fully owned subsidiary of BEL which started manufacturing Gen2 Image Intensifiers in collaboration with and as a Joint Venture with BV DELFT Netherlands in 1994. The plant is presently being upgraded to XR-5 grade with a capacity to produce more than 30,000 Image Intensifier Tubes per year. BEL also has plans to produce Micro Channel Plate (MCP) indigenously with ToT from PHOTONIS once the XR-5 is fully established.

Tata Advanced Systems Limited (TASL)
Night Vision Devices is one of the areas of strategic interest for Tata Advanced Systems Limited (TASL). TASL has entered into a partnership with Exelis Inc., the world leader in Gen 3 Image Intensification based NVDs, to manufacture and supply these systems to Indian Defence market. As part of the drive towards achieving indigenisation, TASL has set up a production facility in India, for assembly and manufacture of sub-assemblies and complete systems.