The secure environment provided by the Army, ensuring the path to prosperity and development for the country as a whole, is only a part of the larger and ubiquitous role played by the Indian Army in nation building 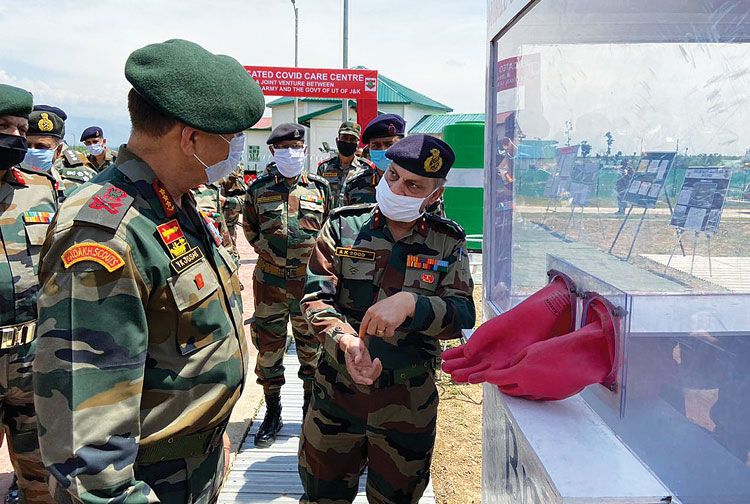 The Indian Army is a much respected and loved organisation. War anniversaries bring it into focus for the citizenry and any perfidy by inimical neighbours on the borders suddenly energises a nationwide interest in this very fine organisation. Beyond that, its role and understanding remains hazy or unknown. In fact, there are often critical voices raised about the drain of the defence budget on the national exchequer. There is a definite need for an understanding of the larger and ubiquitous role played by the army in nation building.

First and foremost, it is the secure environment provided by the army as a guarantor of national and territorial integrity that ensures the path to prosperity and development for the country as a whole. Today the dimensions of conflict are manifold and not restricted to the border areas alone. Once again, it is this organisation which is combating the scourge of violence and terrorism unleashed by secessionist elements, aided and abetted by adversarial powers. As a vital organ of the state it is the army, the ultimate arbiter of national safety and security which ensures a safe environment for internal progress and prosperity. Post COVID-19 pandemic, the Indian economy is set for a northward trajectory and the stress by the government is on inclusive development. All this is not feasible without an adequate assurance of a safe and secure nation and the armed forces represent this insurance policy.

The Army is a great reservoir of trained, skilled and disciplined manpower, readily available. Development of Human Resource has always been a hallmark of the Indian Army.

Another area where the army periodically occupies centre stage is humanitarian assistance and disaster relief. The Navy has played a stellar role in providing critical help on foreign shores and also evacuation of Indian citizens in distant lands during times of natural as well as human crisis. The Air Force is vital during such disasters due to its speed and reach with both rotary and fixed wing air efforts. However, it is the army with its pan-India presence, especially in the far-flung areas of our country, which is omnipresent during any disaster relief efforts. Ideally, the various organs of state and central governments should come into play before the resources of the army are tapped for such eventualities. But invariably it ends up being not only the most potent responder but also the first responder due to its ingrained capabilities, equipment and disciplined application. In recent years, the National Disaster Relief Force (NDRF) has been playing a pivotal role during natural calamities but it is still not large enough to cater for the continental dimensions of India. Therefore, behind the bright orange overalls the army camouflage uniforms are clearly visible in large numbers during any relief operations. The army’s network of field hospitals, its transportation assets, engineer plant equipment and reconnaissance and communication resources with its nationwide reach, has saved countless lives and provided succour to the people of India, during any natural calamity. The army and organisations like the NSG which are populated by army personnel on deputation have the core competencies in areas vital for crisis management and resolution. These include aspects such as hostage rescue, bomb disposal, search and rescue missions, heli-borne extraction and even rescue operations from blind wells.

The Indian army is possibly the leading force for inclusive development. The road and track infrastructure in the remotest areas over inhospitable terrain, has ensured outreach and connectivity with Indian citizens who inhabit these far-flung parts of the country. Combined with this the army has always taken the lead in building and running schools, medical facilities and habitat enhancing infrastructure in distant border areas. Interestingly, it has also been playing a key role in ecological sustenance through the various territorial army units.

The flavour of the season and the pointer to future economic prosperity is ‘Make in India’. Once again, it’s the Indian army which is a major stakeholder in the success of the ‘Make in India’ pursuit. Being the largest single service, the matrix of numbers related to its equipment and wherewithal are of a very large dimension. Manufacture of military equipment not only gives a boost to the defence industry, it also builds up a dual use ecosystem of many smaller items and sub-items which in turn encourages entrepreneurship, generates employment and multiple other benefits. Success of ‘Make in India’ for defence equipment will lead to an enhancement of defence exports, accrue forex earnings and contribute significantly to the GDP. It also needs to be emphatically emphasised that rather than being a drain, the defence budget should be seen as an engine for economic growth.

In the international arena military diplomacy in its various forms is a key element in engaging with other nations. The army has adequately leveraged its capacity of putting boots on ground by being the largest contributor to worldwide UN missions. It also provides invaluable support in terms of capacity building and capability development to various friendly foreign armies. Its training institutions have a sizeable presence of officers from such nations.

Within the country the army has provided key support to the central armed police forces in terms of training, equipment and crossattachment of personnel for absorbing best practices. Outside its own organisation the army has been a great facilitator in human resource development. The training and interaction imparted by its personnel to the youth of India, through the medium of the National Cadet Corps, is a stellar example. In fact, the NCC is widely regarded as an arena of discipline, duty and patriotism and many young spirits vie to don its khaki uniform. The army is also a great reservoir of trained, skilled and disciplined manpower, readily available for lateral absorption in other government organisations as well as the private sector. In that sense development of human resource has always been a hallmark of the Indian army.

The nation expects the army to perform, whether in war, internal strife, disaster relief or any other contingency beyond other organs of governance and the army can proudly claim that it never ever fails on this count. In fact, it goes far beyond this and will always remain a key element in nation building.