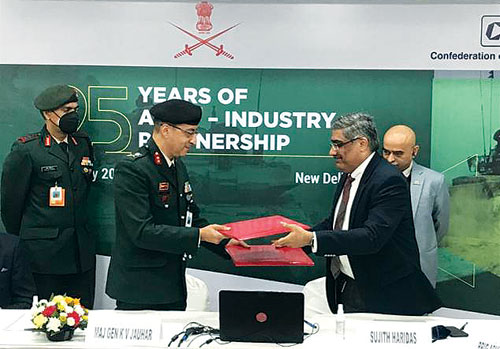 An MoU between the Indian Army and Society of Indian Defence Manufacturers (SIDM) was signed on January 21, 2021 to provide further impetus to indigenisation under the Prime Minister’s vision of ‘Atmanirbhar Bharat’. This MoU was signed on the occasion of 25 Years of Army-Industry Partnership with Confederation of Indian Industry (CII). Collaboration between the Indian Army and industry started in 1995 with the indigenisation of spares and has progressed to major defence platforms and a wide range of weapons and equipment. The Army has reorganised itself by aligning both the revenue and capital routes of procurement under Deputy Chief of Army Staff (Capability Development & Sustenance). Army Design Bureau (ADB) has been established to act as a direct facilitator with the industry and thereby connect the defence manufacturers directly with the user.