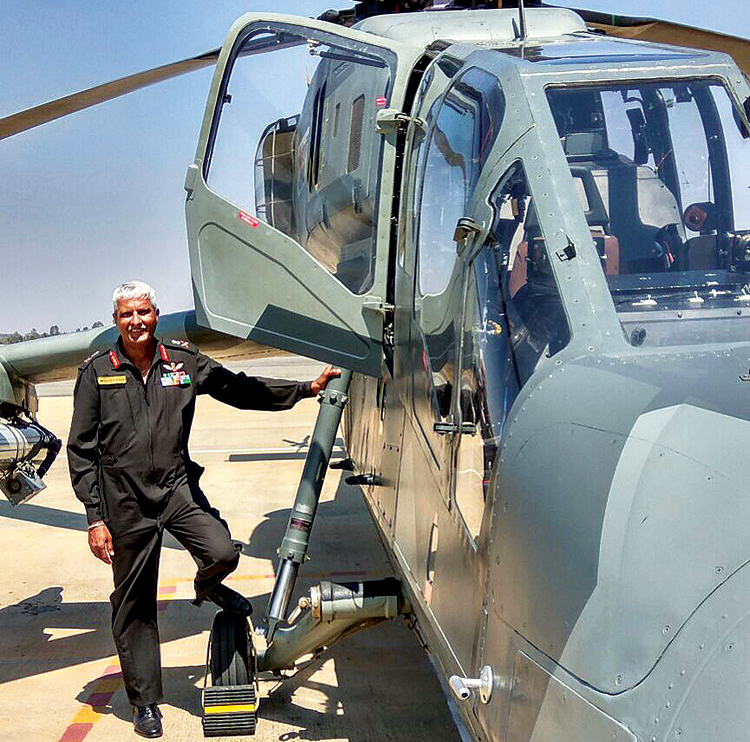 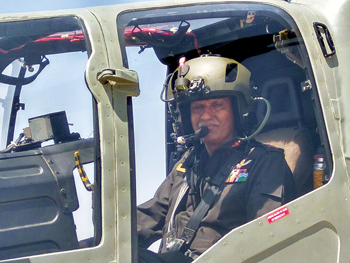 DG in the cockpit of LCH

SP’s Land Forces (SP’s): What is the vision for the development of the Army Aviation Corps in line with the Long Term Perspective Planning?

Director General of Army Aviation (DGAA): In the future battle space, major asymmetry against enemy combat forces can be achieved by integrated employment of third dimensional capability. Accordingly, the ongoing capability development of Army Aviation is aimed at providing integral reconnaissance and surveillance, intimate tactical lift and direct application of fire power across the full spectrum of operations. However, while doing so, operational dynamics of the field formations have also been considered to ensure theatre specific profiling of aviation assets.

SP’s: Doctrinally, is more space being created for integral air elements for futuristic war fighting by the Army? If yes, how?

DGAA: Army Aviation is not merely the air component of the Army but an integral part of the Combined Arms Team. Its primary mission is to fight the land battle and support ground operations as a manoeuvre arm of ground forces in the Tactical Battle Area (TBA). The only way to realise this intent is to have dedicated integral Aviation assets under the Field Force Commander. Towards this aim, there is a definite doctrinal shift in profiling of dedicated utility and combat Aviation assets with the induction of ALH, ALH-WSI and the impending induction of LCH and Apache AH-64E, which will be integral to the Army as against the erstwhile capability of Army Aviation which was restricted to Reconnaissance and Observation tasks alone.

SP’s: What is the status of the procurement process for the Ka-226 Light Utility Helicopters? What are the acquisition time lines?

DGAA: The technical evaluation of the Ka-226T proposal is under process. Thereafter, the cost negotiations would be carried out culminating in signing of the contract.

SP’s: By when is the Chetak/Cheetah fleet expected to be phased out? What are the measures being taken to ensure the flight worthiness and life extension of this fleet?

DGAA: The Cheetah/Chetak helicopter will be phased out based on induction of Ka-226T and LUH manufactured by the Hindustan Aeronatics Limited (HAL). Timely servicing and overhauls are being carried out to ensure the availability of the helicopters for all operations. Maintenance and overhaul procedures of the fleet are well established. Every aircraft that is flying is fully airworthy. Management of spares remains work at hand and induction of replacement helicopters will ease out this challenge.

SP’s: How is the Dhruv Advanced Light Helicopter (ALH) performing and what is its status of induction?

DGAA: The ‘Dhruv’ (ALH) is steadily emerging as the Aviation workhorse and force multiplier of the Indian Army. The helicopter has proved its mettle in all types of terrain obtained in the country ranging from the super high altitude areas to the extremely hot and dusty environs of the Western sector. The helicopter has also pitched in during natural calamities in India and Nepal providing relief to the affected populace. Dhruv has been successfully inducted into the field formations and is performing all its envisaged operational roles.

SP’s: How is the armed version of ALH (Rudra) performing and what is the status of its induction?

DGAA: Rudra helicopters are presently being exploited in various terrains and are getting integrated into the operational role of the Indian Army. The helicopter would provide the much needed integral aerial combat fire power.

SP’s: What are the aggregate final numbers for the Dhruv in AAC plans?

DGAA: Army Aviation Corps is planned to have a dedicated utility helicopter fleet of more than 100 Dhruv helicopters to support the operations of Indian Army and provide tactical lift capability to all the field formations.

SP’s: You had recently flown the HAL’s Light Combat Helicopter. What are your views on its capability?

DGAA: The Light Combat Helicopter is a combat helicopter designed for dedicated combat roles at par with contemporary attack helicopters in its weight class. It has been tested in the varied terrains obtained in the country. Army Aviation test pilots are closely involved in the development of the helicopter. LCH is likely to be inducted into the Army Aviation Corps in the immediate future.

SP’s: What would be the roles of Light Combat Helicopter, Rudra and Apache in Army Aviation Corps?

DGAA: Combat aviation assets with modern avionics, electro-optics and weapon systems can perform multiple tasks in the entire spectrum of conflict in varied and inhospitable terrain including high altitude areas. The Rudra is a potent combat helicopter with an array of armaments including multiple types of rockets, turret gun and capability to mount anti-tank guided missiles besides state of the art avionics. It can perform a multitude of roles ranging from armed escort for heliborne operations to intimate fire power for various offensive and defensive operations. The LCH has a similar armament profile with enhanced manoeuvrability and armour protection, and is primarily meant for the mountains. The Apache is one of the best attack helicopters in the world, and will be fully integrated with the mechanised forces, providing unmatched fire power and manoeuvrability. 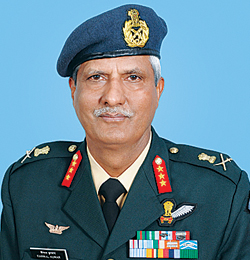 “It has been decided that all future attack helicopter inductions will be for the Army. Towards this, induction of AH-64E Apache helicopters into the Army is in the final stages of approval.”

SP’s: What is the range of weaponry being sought for combat/armed Army Aviation Corps helicopters?

DGAA: The Apache AH-64E, Rudra and LCH would be equipped with a Turret Gun, Rocket system, Air to Air Missile and Anti Tank Guided Missile.

SP’s: Is the Army planning to induct medium lift and heavy lift helicopters (like the Mi-17 and Chinook)?

DGAA: As of now, medium and heavy lift helicopters are being operated by the IAF. However, in the long term as and when the requirement is felt, the same will be looked into.

SP’s: Are there any plans to induct fixed wing aircraft in the future? If yes, what will be their primary role?

DGAA: As of now the requirement of fixed wing aircrafts for the Army Aviation is not envisaged. However, as and when due to operational requirements, the need arises, the same will be examined.

SP’s: What is the progress on the decision to transfer the attack helicopter role from the IAF to the Army? What are the timelines?

DGAA: It has been decided that all future attack helicopter inductions will be for the Army. Towards this, induction of AH-64E Apache helicopters into the Army is in the final stages of approval. Meanwhile, the existing attack helicopters and the already contracted 22 x Attack Helicopters will be held with the Airforce.

SP’s: In terms of air operations, fleet maintenance and air maintenance what measures have been put in place for greater jointmanship with the IAF?

DGAA: The aspect of greater jointmanship is being addressed by joint courses at training institutes, exchange of aviators, sharing of best practices including flight safety courses etc. Feasibility of having common operating procedures for maintenance of aviation assets is being studied. Air maintenance is primarily the responsibility of the IAF. However, the shortfall in availability of IAF flying effort is being made up by Army Cheetah, Cheetal and ALH (Dhruv) helicopters.

SP’s: What about induction of women pilots?

DGAA: Army Aviation already has women officers, who are being directly commissioned as Air Traffic Controllers (ATC) officers. Besides this, women engineering officers are also being posted in Army Aviation units for maintenance of the helicopter fleet. The proposal for inducting women officers as aviators is under examination and is being viewed positively.

SP’s: What is your vision to support the ‘Make in India’ initiative, and what steps have been taken to support the Industry to fulfill procurement objectives indigenously?

SP’s: What is the vision for Army Aviation procurement and maintenance budgets over the next 20 years?