Disengagement to Demobilisation: Resetting the Relations

China is a master of spinning deceit and covert action exploiting strategy and statecraft as means of “Combative coexistence” with opponents. Throughout their history Chinese have had their share of brutal conflicts at home and with neighbours.

The narrative on the Line of Actual Control (LAC) between India and China and in the Sub Sector North (SSN) and rest of Eastern Ladakh since July 5, 2020 has been of disengagement. This has manifested only in to minor thinning and some withdrawal of opposing forces on the LAC, particularly the areas of Hot Spring, Gogra, Galwan and Fingers along the Northern Bank of Pangong Tso. Much of this has happened after series of talks at the level of Corps Commander from military side and then political and diplomatic parleys of July 5 between the Special Representatives of two countries, i.e National Security Advisor of India and Foreign Minister of China. How the disengagement is translating itself on ground and it’s implications on the status quo ante that India has been seeking for has become a matter of debate, especially on the mechanism of disengagement and what kind of concessions are being given by either side in terms of real estate. This whole matter further is of even greater concern as the analysts and strategists are yet to get a clear insight to the explanation as to why China adopted this stance at all. The reasons could be many from India’s cosying up with USA, issues of domestic legitimacy of Xi Jinping, India’s infrastructure development close to the LAC and/or many more, but it will not be business as usual for very long. The relation in which Prime Minister Modi had been investing ever since 2015, never loosing an opportunity to strike a personal rapport, are heading further Southward with every passing day.

The PLA is building up defences, constructing concrete bunkers and while there is thinning out from the show window to avoid direct confrontation; however, they are definitely not leaving the sector.

The PLA has moved back by 1.5 to 2 kms at varying locations but has continued to consolidate in the rear all along including those areas where disengagements are happening. The PLA is building up defences, constructing concrete bunkers and while there is thinning out from the show window to avoid direct confrontation; however they are definitely not leaving the sector. Similarly the Indian Army troops have also thinned out and moved behind. So there is disengagement (thinning out) but not de-escalation (demobilisation) making the consequences implicit. Because of lack of authoritative commentary from the government it is difficult to interpret on the interactions that have taken place at the political and diplomatic level on the process and procedures as also the limits of pull back involved. Therefore, what is happening on ground leads to perceptions and perceptible and not concrete deductions? From all this emerges is that both sides have moved some distance. A buffer zone of anything between 3 to 6 kms has been created which will be inviolable for some time till the situation normalises. And that normalisation remains a big question mark for some time to come. This also implies that the patrolling rights of Indian forces at multiple points have been forfeited for this duration or forever, as in international politics, possession is not just nine-tenths of the law, it is the law. It actually means that we have withdrawn from the boundaries that we had controlled, even if it was by patrolling, as we can’t go to the same points again. This is rather a dangerous precedence with great disadvantage to India. 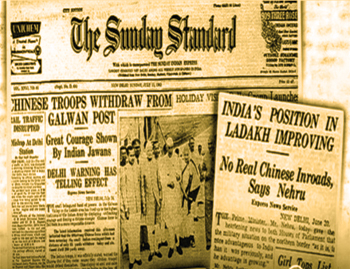 Brahma Chellaney rightly comments, “The setting up of Buffer Zone creates a new status quo, even if temporary. However since the new status quo suits China, it may push to enforce it indefinitely until a settlement is reached thus depriving India of patrolling rights. The revised status quo would be firmed in by applying the percept that “possession is nine-tenths of the law.” The Buffer Zone creates a huge advantage for China1.” Post Doklam, Chinese had established a strong position on plateau which was only being patrolled earlier. There should have been political and diplomatic initiatives to call out for changing the status quo. To believe that relations, because of the Wuhan Summit and at Mamallapuram were normal would be naïve. Why would other wise PLA had continued pressing forward on multiple points along the LAC, push for changing the definition of LAC coupled with a significant change in their behaviour. This put to question the whole construct and structure of agreements since 1988-1993 and the confidence building measures in 1993, 1996 and 2013 in an effort to prevent the use of force on the borders.

Every narrative points towards China’s intentions being questionable. 58 years ago, the Headlines of July 15, 1962 read “Chinese troops withdraw from Galwan Post; Great courage shown by Indian Jawans: Delhi warning has telling effect.” Exactly 96 days after this banner headlines on October 20, 1962, war happened. Para 6 of the leaked Secret Handerson Brooks Report gives out how and where the clashes happened before the war. “The clashes started from Longju in Aug 1959 and then Kongka La in Oct 59. India adopted the forward policy in Nov/Dec 1961 and then Galwan happened on 10 Jul 1962 followed by Dao La on 08 Sep 62 and finally the war on 20 Oct 1962”. This no way implies that the current disengagement albeit thinning out and neither de-escalation nor demobilisation may lead to war. However the trust deficit that has erupted and only reinforced over a period in dishonouring of the various CBM’s and Treaties resulting in murderous assault on Indian troops and build up and consolidation with thinning out as an alibi is to be addressed with caution and guards on.

There is disengagement (thinning out) but not de-escalation (demobilisation) making the consequences implicit.

Tactical actions can have grave strategic implications if red lines are not clearly visible and defined. History has shown that adversaries never respond to weakness. China is a master of spinning deceit and covert action exploiting strategy and statecraft as means of “Combative coexistence” with opponents. Through out their history Chinese have had their share of brutal conflicts at home and with neighbours. Bite by bite, China has been nibbling away at India’s borderlands, even as successive Indian PMs have sought to appease it. The present discourse risks locking India in a “no war, no peace” situation with China and imposing huge security costs. This path aids China’s time-tested strategy of attrition, friction and containment to harass, encumber, encircle, deceive and weigh India down2. The pressing forward and selective withdrawal and making No Man’s land as their territory could just be an exploratory attempt for a confirmed expansionist state to gauge the world opinion and reaction for much larger design.

India needs to view the entire strategic landscape as part of single whole. What may appear at this stage to us and the rest of the world as a miscalculation could well be manoeuvred in to a great victory with deployment and holding on to areas which till this far was No Man’s land giving patrolling rights to both sides. China may for the time being would have lost the public opinion warfare with “expansionists design”, “Covid crisis” and also “Cyber warfare” launched covertly through e companies. The consequences of New Delhi’s decision of banning 59 applications and it’s emulation by other countries may have also shattered Beijing’s long term ambition to replace the US as world’s dominant technical power in the immediate. But quite acceptance of Chinese expansionist design in revising and redefining the LAC and Indian claims to other areas would be our greatest geopolitical and strategic setbacks.

On the one hand India will have to determine the operational and tactical warning sign that we missed because of which we have been taken by surprise at every level. On the other, being the largest neighbour and at least this far even the largest trading partner, India need to re-set it’s relation with China, offcourse with the backdrop of recent crisis. This Resetting will have to be in the entire spectrum encompassing all aspects of military, strategic, diplomatic and economic perspectives. Just as China has continued with it’s assertiveness over the East and South China sea without letup, the assertiveness on the LAC will have to be confronted with resolve and favouring India strategically. While the new alliances must be reinforced, the neighbourhood also must be secured. The Middle Kingdom (China) has had no hesitation in attacking India’s core interests and wants to redeem it’s territorial claims. India also must shed all hesitations to create as much turmoil for China. Endeavour should be towards Re-setting the relation from least of all strategic equilibrium if not from strategic superiority by leveraging the Comprehensive National Power in entirety.