The New Army Chief & His Challenges

General Manoj Pande takes over the reins of the Indian Army at a time when the world is facing many uncertainties domestically and globally. He has the leadership qualities of teamwork, open-mindedness, integrity, persistence, social intelligence, fairness and broad perspective necessary to take the bull by the horn. 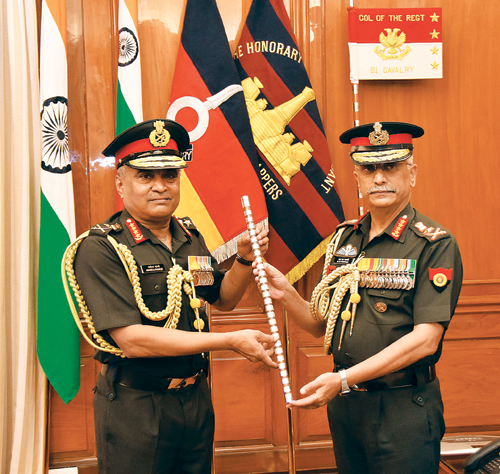 The ascendency of General Manoj Pande as the 29th Chief of the Army Staff (COAS ) symbolises both continuity and change. Continuity not the least because a ‘Manoj’ will continue to occupy the coveted position of the Chief of the 1.3-million-strong, third largest army on the planet as another ‘Manoj’ exits after an eventful tenure. Continuity also because like his illustrious predecessor, General Manoj Mukund Naravane, the new Chief is softspoken, self-effacing, understated, humble, open-minded and a thorough gentleman. Change because General Pande comes from a completely different background, having the distinction of becoming the very first COAS from the Corps of Engineers unlike all other Army Chiefs since independence who came from either Infantry, Artillery or Armoured Corps.

Almost a decade and half back, in 2006-07, we were neighbours occupying the two first floor apartments of Block 100 in the Army War College campus, attending the Higher Command Course-35. We spent many a quite evenings together sharing our thoughts over a drink in the drawing rooms and terraces of our apartments. What always stuck me most about him was his unpretentious, modest demeanour even while diving deep into weighty subjects under discussion. Coming from a family of educationists with his father Dr C.G. Pande having been the head of the Psychology department of Nagpur University, the unsatiated quest for knowledge and scholarship was imbued in him. His late mother Prema was a popular announcer and host with the All India Radio. Off and on, his better half, the charming and gracious Archana, a gold medallist Dental Surgeon, would join him in Mhow, forced as she was to stay away due to their son Akshaya’s education. The latter is now an officer in the Indian Air Force. Accompanied by our wives, we would travel together to Singapore and Malaysia for a ten-days foreign study tour, sharing many memorable moments. It is such a privilege to write about him today.

Commissioned into the Corps of Engineers, The Bombay Sappers in 1982, General Pande attended the prestigious Staff College, Camberley in the UK and later served in the United Nations Mission as Chief Engineer in Ethiopia and Eritrea. He assumed command of the 117 Engineer Regiment along the Line of Control at the time of Operation Parakram in the Pallanwala Sector of Jammu and Kashmir. After command of an Engineer Brigade as part of a Strike Corps in the western theatre, he attended course at the National Defence College, New Delhi and then was posted as BGS Ops at HQ Eastern Command. Promoted to Major General, he commanded 8 Mountain Division in the Kargil sector which he had earlier served as Col Q. The General then tenanted the position of ADG MO in the Directorate General of Military Operations at Army HQs. Promoted to the rank of Lt General, he served as the Chief of Staff of HQ Southern Command before taking over command of IV Corps at Tezpur and then appointed DG DC&W. General Pande was elevated as the Commander-in-Chief of the tri-service Andaman and Nicobar Command (CINCAN) from June 2020 to May 2021 before taking over the reins of the Eastern Command in June 2021. Seven months later he was appointed as the Vice Chief of Army Staff on February 1, 2022.

General Pande takes over the reins of the Indian Army at a time when the world is facing many uncertainties with first the COVID pandemic having seriously disrupted the way we lived and did business and then the raging war in Ukraine now proving to be far more seismic that initially estimated. There is a major churning that’s taking place in the world order that prevailed since the end of WW II as a ‘cancel culture’ takes over, unparalleled and unseen even during the great wars. It is no more about taking sides diplomatically and militarily as called out by President George Bush after 9/11 when he launched his Global War on Terror (GWOT), “Every nation, in every region, now has a decision to make. Either you are with us, or you are with the terrorists.” The war in Ukraine has heralded the decoupling of the world, encompassing economic and trade sanctions, banking ruptures, exclusions in the field of infotech and social media platforms, fine arts, Paralympics, Wimbledon, opera artists and even the revered Orchestra tenors. India is in the spotlight because of its unique position of having a long serving reliable partnership with Russia and also having close ties with the US and Europe. Pressures are being mounted on a daily basis for India to take sides. In such a situation, the Indian Armed Forces have a huge challenge on its hands as they rework and recalibrate their strategies. 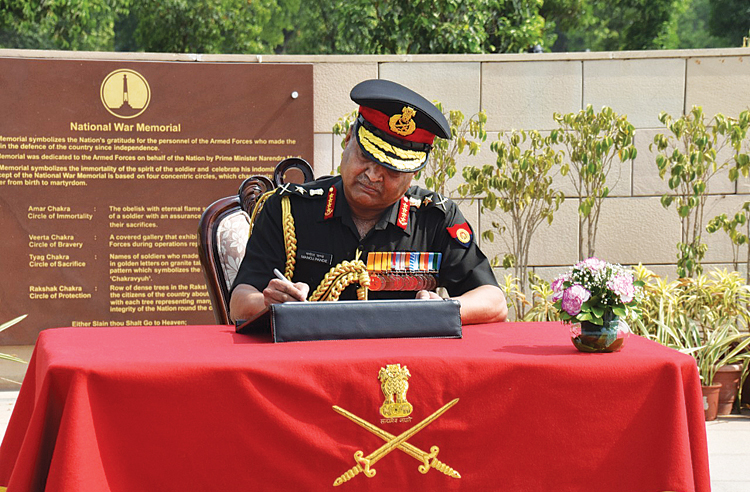 On taking over as the Chief of the Army Staff, General Manoj Pande laid a wreath at the National War Memorial & paid tributes to the Bravehearts

India’s neighbourhood is in financial turmoil even as the threats from a belligerent, rising China and a decapacitated terror driven Pakistan necessitates that we keep our powder dry. The ghosts of Galwan lurk around even as rounds and rounds of futile border talks yield little in terms of arriving at a settlement. While China is hobbled by COVID, disturbances in Hong Kong, strident calls for asserting independence by Taiwan and disruptions in trade triggered during the Trump era, India needs to be fully geared to face any misadventures from the North. The internal turmoil in Pakistan, with overthrow of Imran Khan, is likely to give the Pakistan deep state comprising its Army and the terror networks upper hand which means a long hot summer ahead. Financial difficulties on the verge of bankruptcies in Sri Lanka, Maldives, Pakistan and Nepal can trigger serious internal disturbances which can spill-over into India. Thus, many contingencies including our role in the QUAD will have to be analysed thoroughly and plans put in place.

The armed forces are themselves at the throes of large-scale structural changes with the long-pending creation of integrated triservices theatre commands being topmost in the agenda. The nature of warfare having undergone cataclysmic changes in the past seven decades since WW II, single service command structures are no more viable to conduct wars efficiently and effectively. Despite several prodding by the political executive, the three services have not been able to overcome their serious differences creating stumbling blocks. General Pande having been the CINCAN comes with valuable triservice experience and can greatly infuse the necessary thrust to this urgent project.

A second issue of import is the adoption of suitable equipment philosophy which is aligned with the government’s avowed goal of ‘Atmanirbhar Bharat’. This will necessarily involve close scrutiny of current holding and their serviceability and maintenance and future acquisitions for modernisation. Used to demanding the latest and best stateof- the-art weapon systems which invariably entailed huge imports and thus strategic vulnerabilities, the Indian Army has to rework its acquisition plans against constantly shrinking defence budgets and a nascent Indian defence industry in the private sector.

At the personnel level, the Army is at the cross-roads. Being the dominant service relying heavily on manpower not the least because of its protracted internal security duties in the North-East and J&K, there is increasing pressure to reduce its strength in order to tame the ever-ballooning pension outgo. This will need careful balancing as fighting armies are easy to disband but quite difficult and time-consuming to raise. The experiences of large-scale shrinking of the army prior to the 1962 debacle cannot be so quickly forgotten even while investments in modernisation should result in reducing the bench strength. Concepts like ‘tour of duty’ being thrown about to reduce pension burden will need careful assessment before embracing them. The issue of Non-Functional Upgradation (NFU) is equally sensitive to the serving officers as the same has become applicable to CAPF officers through a Supreme Court ruling. There have been under-the-surface long-time grumblings about regimental affiliations overshadowing a merit-based selection system for higher commands as also grievances about some arms and services having lost disproportionately large number of higher ranks slots due to adoption of ‘command exit model’ and so on. These will need a fresh look as the first Chief from the Corps of Engineers goes about setting the house in order.

The Army Veterans are today a disaffected lot. A bruising court battle for OROP hasn’t exactly delivered the balm, a section of the veterans was seeking. This has pitted this section of the veterans at odds with other veteran associations and organisations and created unseemly fractures in the veteran community at large. The restrictions imposed in the CSD system has irritated many and it has become cumbersome to avail the CSD services by the old veterans who are not tech-savvy. The ECHS delivery is patchy at best and the COVID pandemic brought out many poignant instances of service hospitals turning away veterans who subsequently lost their battle with the virus. They will need a calming and soothing approach.

As the career graph of General Pande reveals, he is uniquely placed to chart a novel course to address and ameliorate these burning issues. There are great expectations from the new Chief. He has the leadership qualities of teamwork, open-mindedness, integrity, persistence, social intelligence, fairness and broad perspective necessary to take the bull by the horn. General Pande leads a very simple, uncomplicated almost monk-like personal life. With his remarkable professional exposure and experience and his calm and composed empathetic persona, the Indian Army may be poised for glorious days ahead. The collective prayers of the serving and the veteran community and the country at large will wish General Manoj Pande to succeed where no one has before him.