On assuming the appointment of the Chief of the Army Staff, General Manoj Pande was presented with a Guard of Honour at South Block on May 1, 2022 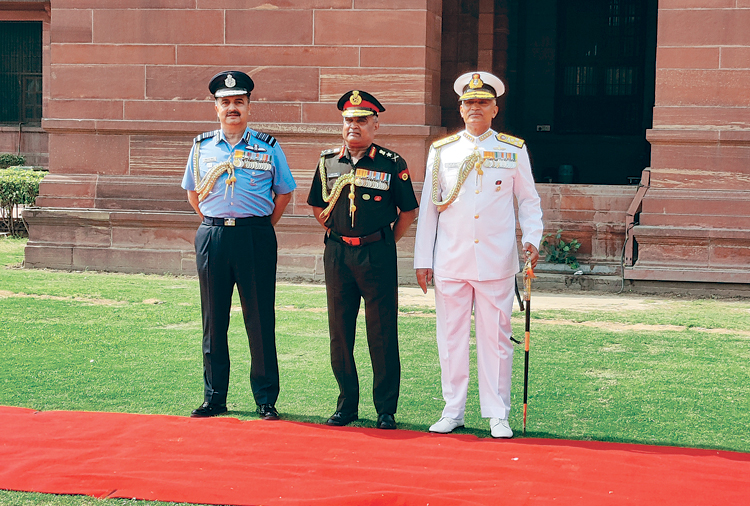 Chief of Air Staff Air Chief Marshal V.R. Chaudhari and Chief of Naval Staff Admiral R. Hari Kumar at the Guard of Honour ceremony for the new COAS General Manoj Pande. All three of them have trained together in the National Defence Academy (NDA) and are from the 61st NDA course.

“All three of us have trained together & have had the opportunity to work together in the past and now we are fortunate to have that chance again in the future. This is a good indication of synergy & cooperation. All three of us will work together and take things forward,” said Army Chief General Manoj Pande on the presence of Air Force & Navy Chiefs during the Guard of Honour ceremony on Sunday, May 1, 2022 at the South Block Lawns. He further added that the Army along with its sister services will unitedly deal with national security challenges and conflict situations.

It was a rare yet reassuring sight to have both the other services’ chiefs at the ceremony. CAS Air Chief Marshal V.R. Chaudhari, CNS Admiral R. Hari Kumar and General Manoj Pande have trained together in the National Defence Academy (NDA) and are from the 61st NDA course. The camaraderie among the three was evident and this gesture gave a significant hope of how the three services can work in cooperation and collaboration towards national security and development. General Pande, who served as the Vice Chief from February 1, became the first-ever officer from the Corps of Engineers to become the COAS . He was commissioned into the Corps of Engineers (The Bombay Sappers) in December 1982.

The new Chief of the Army Staff also talked about the fast-changing geopolitical situation and the several challenges that await ahead for which he aims to ensure very high standards of operational preparedness at all times, alongside modernisation and accelerated indigenisation. He continued to stress on the well-being of the defence staff while ensuring national security and development.

Laying out his intent for the armed forces during his tenure of two plus years, the Army Chief listed his top priorities:

“The Army has also contributed to nation building. I would like to assure through you that the Indian Army will be fully committed to the values of freedom, liberty and equality,” he said to the media. “It is a matter of immense pride and honour for me that I have been entrusted with the responsibility of leading the Indian Army, which I accept with all humility. Indian Army is fully committed to the values of Liberty, Equality, Fraternity,” stated General Manoj Pande.

On taking over as the 29th COAS and reviewing the Ceremonial Guard of Honour at the South Block lawns, he appreciated the Guard for an impeccable turnout and impressive parade. Following this he also laid a wreath at the National War Memorial and paid tributes to the brave hearts who laid down their lives for the nation.