The challenges to international cooperation are manifold, aside from consensus on definition of terrorism. Real time intelligence must be shared continuously inclusive of sharing analyses and forecasts. 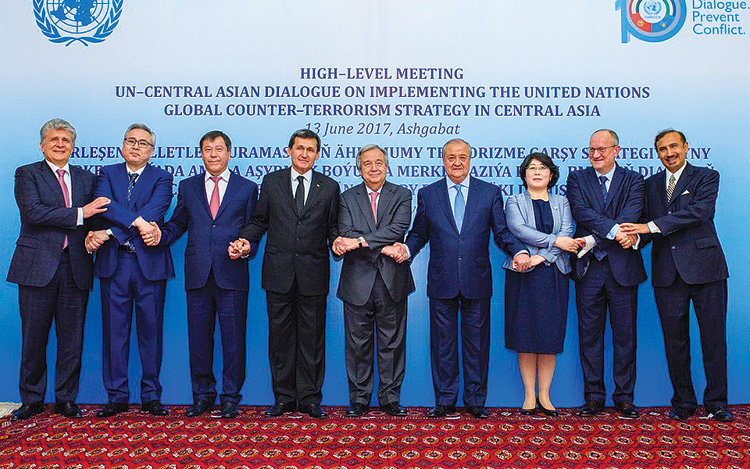 UN Secretary General Antonio Guterres, visiting India in July 2018, denounced terrorism as a plague that affects the world. He said the definition of terrorism had not yet been coined. India, having proposed the CCIT (Comprehensive Convention on International Terrorism) to the UN, had raised the issue of definition at the recent United Nations General Assembly (UNGA) meet, to which Guterres said UN fully supports India on this.

Russian diplomat Vladimir Ivanovich Voronkov, who was Russia’s Permanent Representative to International Organisations in Vienna since 2011, was appointed Under Secretary General for the new United Nations Counter-Terrorism Office on 21 June 2017. The UN Office of Counter-Terrorism has five main functions: one, provide leadership for the General Assembly counter-terrorism mandates entrusted to the Secretary General from across the UN system; two, enhance coordination and coherence across the 38 Counter-Terrorism Implementation Task Force entities to ensure the balanced implementation of the four pillars of the UN Global Counter-Terrorism Strategy; three, strengthen the delivery of UN counter-terrorism capacity-building assistance to Member States; four, improve visibility, advocacy and resource mobilization for UN counter-terrorism efforts; and; five, ensure that due priority is given to counter-terrorism across the United Nations system and that the important work on preventing violent extremism is firmly rooted in the Strategy.

The Under Secretary General, UN Office of Counter-Terrorism, is responsible to provide strategic leadership to UN counter-terrorism efforts.

The Global Terrorism Database (GTD) 2017, collected and collated by the National Consortium for the Study of Terrorism and Responses to Terrorism (START ); a Department of Homeland Security Centre of Excellence led by the University of Maryland, USA, shows number of deaths from terrorist attacks to 25,673. More countries experienced terrorism; more than in the past 17 years reflecting increase from 65 countries in 2015 to 77 countries in 2016. More troubling, was the potential for many hardened fighters and leaders to leave Iraq and Syria to join new radical permutations of ISIL or existing ISIL affiliates in other countries. This has contributed to a continuation of last year’s trend of an expansion of ISIL activities into other countries. Zamir Kabulov, Russian Special Envoy to Afghanistan and Pakistan estimates ISIS strength in Afghanistan at about 10,000 including supporters.

According to GTD 2017, five countries accounted for three quarters of all deaths from terrorism: Iraq, Afghanistan, Syria, Nigeria and Pakistan. These same countries have been the five most affected by terrorism every year since 2013 but for the first time Turkey was one of the ten most affected countries.

Conflicts of today are not really defined, are ambiguous with no defined borders, and may not have defined actors to fight against. Adversary can be state, non-state, state-sponsored non-state, or a mix of all. Both US and China supported, armed and trained Mujahidden and Al Qaeda to oust the Soviets from Afghanistan. The US is also behind the raising of the ISIL/ISIS. The Afghan government is battling Taliban as well as proxies of Pakistan, in addition to non-state forces like Haqqani Network, Islamic State Khorasn and Al Qaeda, even as the latter two may have underhand links with Pakistan’s ISI. Similarly, in the Israel-Hezbollah conflict and in Syria, the main adversaries are non-state entities within the state system. That is why irregular forces are in play in West Asia, Ukraine and South Asia.

The challenges to international cooperation are manifold, aside from consensus on definition of terrorism. There is need to link regional and national counter terrorism centres – where India is yet to establish an NCTC despite suffering foreign sponsored terrorism for decades. Real time intelligence must be shared continuously inclusive of sharing analyses and forecasts. This has become a gigantic task with terrorists exploiting the internet for radicalisation, recruitment, planning and coordinating terrorist acts and attacks. International cooperation requires real-time communications, close coordination and resource optimisation. Sharing technology, data, tools, models and visualisation is required, which should encompass R&D for counter terrorism in cyberspace, space and electromagnetic domains. Periodic dialogue and forums must plan preventive strategy, in addition to joint training for collective operations.

The age old maxim of one nation’s terrorist is another nation’s ‘freedom fighter’ remains unresolved; the very reason why consensus cannot be arrived at. To add to this are other factors like ‘good’ and ‘bad’ terrorists. The US added to the complexity by introducing the term “violent extremism”, which in turn ignored radicalisation, to which the world including the west is waking up now. The Sarin Gas attack on the Tokyo Subway on 20 March, 1995 was an act of “violent extremism” perpetrated by members of the Aum Shinrikyo cult. Could you classify members of this cult “non-violent” terrorists before the Sarin attack? Are there ‘good (non-violent) and ‘bad (violent) terrorists?

Next is the support by nation states to terrorist organisations and using them as ‘boots by proxy’, which the US, China and Russia are freely indulging in. China has been arming and supporting the Taliban against US-NATO and in Myanmar arming the United Wa State Army (UWSA) and Rohingyas (in conjunction with Pakistan) in furtherance of its own national interests. It goes without saying that terrorist organisations provided ‘boots by proxy’ in most operations. This is one reason China supports Pakistani terrorism and US fails to take deliberate action against this terrorism exporting country.

With Pakistan under Imran Khan, spurt in terrorism can be expected with Hafiz Saeedled Jamaat-ud-Dawa (JuD) and Falah-i-Insaniyat Foundation (FIF) taken off the list of banned outfits in Pakistan, JeM expanding its terror infrastructure, and JeM-LeT planning seaborne attacks under tutelage of ISI. ‘Lone Wolf’ and CBRN attacks can be expected. China continues to back Pakistani terror. There is need to focus on: surveillance and monitoring of terror activities including cyber activity; availability of terror material; managing social change versus population growth; Islamic radicalisation and youth returning from ISIS; technology assisting terror including body implants / body cavity bombs (BCB), nondetectable explosives; use of drones, wall climbing robots by terrorists; miniature CBRN devices; use of internet to create social unrest and virus attacks; safety of critical infrastructure, chemical and fertilizer plants, oil-gas pipelines and refineries and suicide bombings at airports, train stations, malls, markets, and; eco terrorism. For counter-terrorism, internally we should go for: sustained surveillance and monitoring; use force to eliminate hardcore; remember military operations not sole key; treat ‘Community’ as Centre of Gravity; focused de-radicalisation programmes with forces operating on moral and physical levels; choke State support to terrorism; intelligence and psychological operations, and; periodic re-evaluation for course correction.

We need to be clear that terrorism is here to stay because of it has become the means four geostrategic power play and of furthering own national interests by nations big and small. More importantly, India has to be prepared to fight this battle ‘largely’ on its own. That is why Ashley J. Tellis of Carnegie Endowment had stated, “India being continuously subjected to terror actually suits many… India is a sponge that absorbs global terror.”