Grey Zone conflict strategy has also gained traction due to the pre-eminence of the virtual world in governance, social media, domestic life, commerce and trade. Countries poorly governed are more susceptible to such threats. COVID-19 crisis has further complicated the issue. 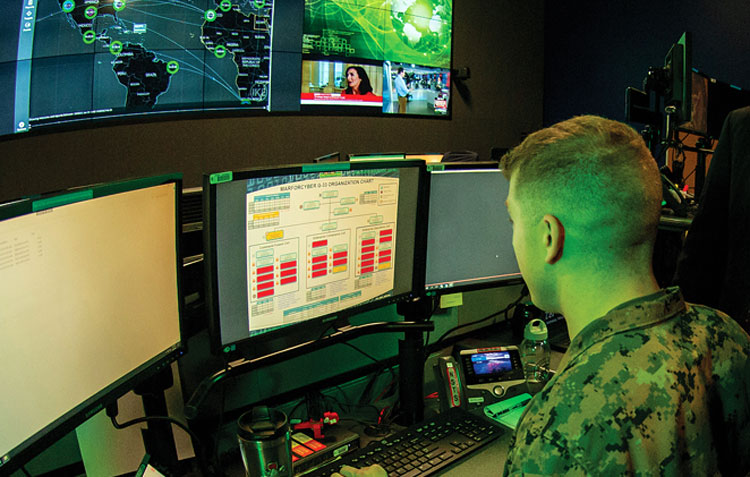 Spiraling Cost of conventional war calls for non-traditional strategies which are defined as irregular, hybrid, proxy, non-contact etc., falling under an umbrella term of Grey Zone warfare. A look at rising US war bills drives home this point compelling other nations to resort to grey zone warfare. For example, as per a US study, it has spent $6.4 trillion since 2001 on all wars fought by it. On the other hand, waging a proxy war with non-state actors in the grey zone can cause unacceptable damage at minimum costs. For example, between 1989 to 2002, government of Jammu and Kashmir (now a Union Territory) spent 3,630 crores (approximate $500 million) on anti-terror operations of which 2,357 crores was reimbursed y the central government (approximate $330 million). Against this Pakistan has spent miniscule both in terms of military and finances to wage a proxy war against India. Disproportionate outcomes, of below the threshold of warfare has encouraged nations to adopt non-military means to achieve their political goals. This form of warfare has led to the phrase “grey zone conflict” which is an overarching term to include cyber, information, hybrid, proxy and threshold warfare, brinkmanship strategies, acts of sabotage and disruption of essential services.

It has also been seen that each country has coined its own terminology for grey zone warfare such as “Unrestricted Warfare” and the “Three Warfare Strategy, comprising legal, psychological and information warfare by China.” Similarly, Russia practices Gerasimov doctrine a mix of hybrid and threshold warfare, which some experts like David Carment and Dani Belo term as “hybrid balancing.” Iran, Pakistan and USA have almost perfected the art of proxy warfare which can be grouped under the rubric of grey zone warfare.

Where does India stand in all this? Sadly, India lags far behind its adversaries even in defensive mechanisms to counter threats emanating from the grey zone. As a result, contemplating any proactive strategy is a distant dream. What are the reasons for such a state? Is it idealism in foreign policy, lack of domain capability and will to adopt such a form of warfare by our national leadership or combination of all these? These questions beg honest answers which would help evolve a strategy to deal with this emerging and dangerous form of warfare of the future. In fact, given the shady nature of grey zone warfare there is a need of more covert activity strategists than “just approach” advocates.

Grey Zone conflicts are characterised by

India is facing an unending threat from its two inimical neighbours China and Pakistan. Realising its conventional weakness, Pakistan has perfected the strategy of “Bleeding India through a Thousand Cuts.” China-Pakistan collusion in the grey zone is now a reality more as evident from some recent actions by Pakistan such as attempt to change the status of Gilgit-Baltistan (GB), conduct reportedly rigged elections, publishing farce of a map showing Ladakh and Junagadh as parts of Pakistan. Such actions by Pakistan in collusion with China are being taken with utter disregard to past treaties and international laws. Similarly, China, is now resorting to pressure point tactic, through face-offs and salami slicing at the northern borders besides leveraging its economic strength to adversely influence our economic growth. The recent example of China trying to swamp Indian economy through ASEAN sponsored Regional Comprehensive Economic Partnership (RCEP) is a case in point. Actions along the Northern borders in Galwan, precluding the use of firearms to prevent any escalation, inciting or prompting Nepal to raise the Limpiyadhura-Kalapani-Lipulekh dispute and Doklam are a few incidents that can be clubbed under grey zone. Also skillful use of maps and old fabricated revenue documents used by China to buttress their claims over territories along the LAC and Borders will fall under grey zone.

Other Sources of Grey Threat. There is also common perception that most of the grey zone activities against India emanate only from China and Pakistan. However, this is not entirely true. There have been a number of instances of information operations falling in grey zone launched by friendly nations to promote their national interests. A case in point is the engineering of Dalit agitation of April 2018. The way BBC and Al Zazeera covered these events one tends to conclude that these were orchestrated by the US and the UK. The adverse media cover to happenings in India support for NGOs also can be clubbed under this rubric.

Meeting the Challenges of Grey Zone

The grey zone threat from China and Pakistan is an existential and futuristic threat, which is unlikely to be resolved amicably. Strategic wisdom lies in anticipation of, and preparation for future wars. Gerismov has predicted that wars in the future will be 75 per cent non-contact and 25 per cent contact. Even in the 25 per cent contact sphere the chances of outright conventional wars are unlikely. Arzan Tarapore writing in Carnegie India backs his conclusion with irrefutable logic that, lack of adequate focus to deal with grey zone capabilities by the Indian Armed Forces has left political leadership to respond to such threat with all-ornothing choice in the use of military force — either start a major conventional war or abstain from any military action. Country needs to develop capabilities in the irregular and nontraditional domains. This will not only curb rising military expenditure but also lead to better conflict resolution. In generic terms, we can broadly group desired grey zone capabilities in each component of Comprehensive National Power which will have a direct bearing on our ability to withstand any challenge in the grey zone. There is a need for a “whole of nation approach” utilising all the elements of national power i.e., Diplomacy, Information, Military and Economic (DIME). While meeting grey zone challenges needs a multipronged approach in all four domains of DIME, this piece will focus on information and military security domain only with a view to evolve an outline strategy and force structure to deal with such threats.

Information Technology has already stepped into new realities of big data, quantum computing, machine learning, artificial intelligence and robotics. The use of space based technologies has further made these systems robust, agile, responsive and dynamic in real time. This has impacted the entire spectrum of national power both hard and soft. To exploit this domain for grey warfare, the strong software base in India needs to be supported by developing an indigenous hardware design and production capability. Given the growth lag in hardware sector, India should collaborate with countries like Singapore, South Korea, Taiwan and other world leaders as an offset to trade negotiations. India needs to acquire manufacturing skills in semiconductors to enhance indigenous production and guard its intellectual property rights with a viable legal framework. Investment both private and public in semiconductor industry is a must if we are to become truly ATMANIRBHAR.

The national military security strategy should constitute Conflict prevention, management and termination strategy across the entire spectrum of warfare including grey zone

India needs to identify vulnerabilities to its info infrastructure and critical data to create backup and redundancy in communications, power transmission, aviation & railways. Cyber-attacks are a reality which need refined, comprehensible and easy to execute crisis and disaster management plans along with indigenous capability to escalate cyber deterrence. There is also an inescapable requirement to create redundancies for space based assets and their services. Further there is a need to develop an offensive capability as well in this domain because any information operations architecture will get breached against sustained attack by determined virtual world predators. Chinese have breached the Pentagon Virtual Space on a number of occasions. Therefore, unless the adversary is also made conscious of the fact that his infrastructure and national systems can also be targeted in equal measure it will be well neigh impossible to achieve credible deterrence in grey zone. However, to achieve this we must exploit our software skills by raising an army of hackers who can at critical juncture incapacitate adversaries’ systems and render them in effective. 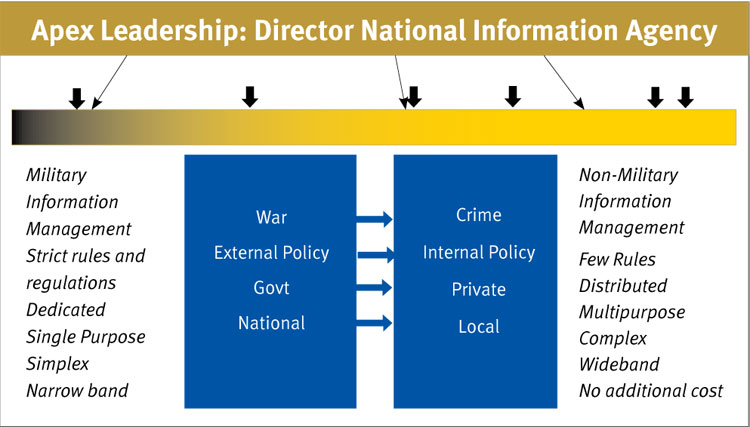 Information-Cognitive dimension of the Indian Public including Armed Forces Personnel is highly susceptible which can lead to both tangible and intangible gains for adversaries. There is an urgent need for a strong internal communication mechanism to dispel rumours and misinformation. At the national and even at the Armed Forces level it does not seem to exist. Even if it does it has been left to private media houses to run counter fake news and counter propaganda campaigns. International media such as the BBC, Al Zaaeera, New York Times, CNN, Global Times, Military Security Services (MSS) China, DGISPR, ISI are churning out anti-India fabricated news at will with Indian media machinery paying only lip service to counter them. The potential flash points having propensity to turn into major public law and order situations get inflamed and turn into mass movements. CAA and NRC agitations are some recent examples. This needs to be kept under constant vigil with TECHINT and HUMINT under an integrated National Intelligence Surveillance and Reconnaissance (ISR) infrastructure to ensure common operating picture by all stake holders. Linguistic skills to include most spoken dialects of languages in regional countries especially Mandarin should be enhanced and harnessed. The crux of the argument is that there is a need to evolve a robust national Information Operations Infrastructure.

The national military security strategy should constitute Conflict prevention, management and termination strategy across the entire spectrum of warfare including grey zone. However, as discussed above India will be facing threats mostly in the grey zone and hence it would be more prudent to build military capabilities in the grey zone to respond to salami slicing and proxy war threats of Galwan, Doklam, Chumar, Depsang type by China and Pathankot, Uri, Pulwama type by Pakistan. Currently we are laying undue emphasis on creating large formations focussed on conventional punitive operations which not only have the inherent danger of escalation but also inhibit military response in grey zone. The answer lies in firmly moving to small agile land formation like the Integrated battle groups duly backed by effect based joint operations under integrated theatre commands. At the same time build capability to deal with grey zone threats by focussing on special forces, cyber operations, information operations and using niche technology based operations such as swarm drones and high precision long range systems.

Agile, lean and technologically empowered Special Forces would provide a better response option to counter grey zone threats. These Special Forces should also have the capability to operate beyond boundaries. Therefore, for a robust military response we need to build a Joint and Combined Arms Capabilities in our defence forces. Use of irregular forces such as terrorists, insurgent organisations to wage proxy / hybrid wars and employment of Anti National Elements would also form an integral part of grey zone warfare by our adversaries. To deal with such threats the future structures must be broadly organised as under:

Contrary to the view of many Western academics and journalists, Gerasimov emphasises that there is no model or formula for warfare, but rather each scenario is markedly unique and requires a tailored approach. In his view, however, “war in the 21st century is conducted at a roughly four-to-one ratio of non-military and traditional military tools and tactics”. Therefore, we need to evolve our own solutions both for offence and defence in the grey zone. While we prepare for future wars based on alternate scenarios, there will be a requirement of greater synergy between all components of security architecture, which needs to be directed towards achieving our National Security Objectives in real time including countering the threat in the grey zone through an institutionalised whole of nation approach.